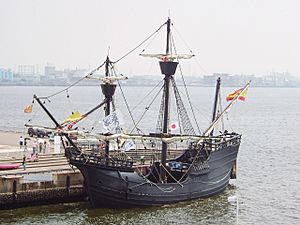 The Nao Victoria, a reconstruction of one of the ships use by Ferdinand Magellan to circumnavigate the world. 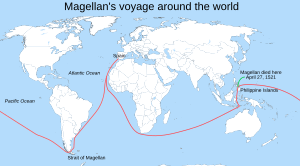 This image shows how Magellan went around the world

Circumnavigation means to travel all the way around the entire planet, or an island, or continent. This article is concerned with circumnavigation of the Earth.

The first known circumnavigation was done by Fernão de Magalhães (Ferdinand Magellan), from 1519 to 1522. Magellan took five ships and went west, from Spain. He discovered a waterway which is now named after him, the Strait of Magellan. Magellan died in a fight with natives on the Philippine island Mactan in April 1521. The voyage was completed under command of Juan Sebastián Elcano. Elcano returned to Sanlúcar de Barrameda, where the voyage had started, with 18 survivors and valuable cargo in 1522. This proved that the earth was a globe. 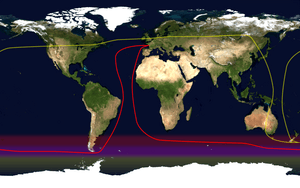 The route of a typical yacht racing circumnavigation is shown in red; its antipodes are shown in yellow. 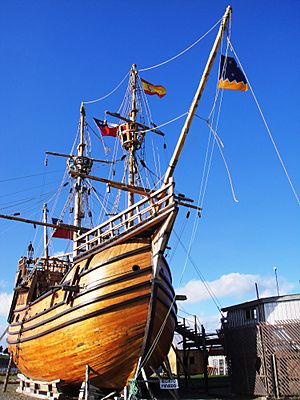 A replica of Magellan's Nao Victoria, the first vessel to circumnavigate the planet

The first single voyage of global circumnavigation was that of the ship Victoria, between 1519 and 1522, known as the Magellan–Elcano expedition. It was a Castilian (Spanish) voyage of discovery, led initially by Ferdinand Magellan between 1519 and 1521, and then by the Spanish Juan Sebastián Elcano from 1521 to 1522. The voyage started in Seville, crossed the Atlantic Ocean, and after several stopovers rounded the southern tip of South America where the expedition discovered the Strait of Magellan, named after the fleet's captain. It then continued across the Pacific discovering a number of islands on its way, including Guam before arriving in the Philippines. After Magellan's death in the Philippines in 1521, Elcano took command of the expedition and continued the journey across the Indian Ocean, round the Cape of Good Hope, north along the Atlantic Ocean, and back to Spain in 1522. Elcano and a small group of 18 men were actually the only members of the expedition to make the full circumnavigation.

In 1577, Elizabeth I sent Francis Drake to start an expedition against the Spanish along the Pacific coast of the Americas. Drake set out from Plymouth, England in November 1577, aboard Pelican. Drake completed the second circumnavigation of the world in September 1580, becoming the first commander to lead an entire circumnavigation.

For the wealthy, long voyages around the world, such as was done by Ulysses S. Grant, became possible in the 19th century, and the two World Wars moved vast numbers of troops around the planet. However, it was later improvements in technology and rising incomes that made such trips relatively common.

Since the advent of world cruises in 1922, by Cunard's Laconia, thousands of people have completed circumnavigations of the globe at a more leisurely pace. The current mechanically powered circumnavigation record of 60 days 23 hours and 49 minutes was completed on 27 June 2008.

Since the development of commercial aviation at least tens of thousands of people have flown around the world. Some regular routes, such as Pan American Flight One (and later United Airlines Flight One), circled the globe, and today planning such a trip through connections is simple.

The first successful attempt to circumnavigate the planet by air occurred in 1924, flown by aviators of the U.S. Army Air Service in a quartet of Douglas World Cruiser biplanes.

Jason Lewis of Expedition 360 pedaling his boat Moksha on the River Thames in London, shortly before completing the first human-powered circumnavigation of the Earth (2007)

All content from Kiddle encyclopedia articles (including the article images and facts) can be freely used under Attribution-ShareAlike license, unless stated otherwise. Cite this article:
Circumnavigation Facts for Kids. Kiddle Encyclopedia.