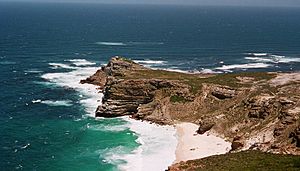 The Cape of Good Hope

The Cape of Good Hope is a place near the far south end of Africa, where the Atlantic Ocean and the Indian Ocean meet. It is a well known area for ships that pass in the sea between southern Africa and Antarctica. It is in the Western Cape Province of South Africa and forms part of the Table Mountain National Reserve.

The first person from Europe to see it was the Portuguese man Bartolomeu Dias. He saw it in 1488 and named it the "Cape of Storms".

All content from Kiddle encyclopedia articles (including the article images and facts) can be freely used under Attribution-ShareAlike license, unless stated otherwise. Cite this article:
Cape of Good Hope Facts for Kids. Kiddle Encyclopedia.