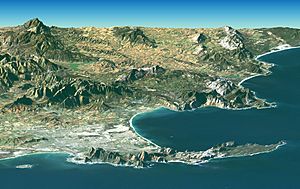 Table Mountain is a flat-topped mountain overlooking the city of Cape Town in South Africa. It is 1084.6 metres in height.

It is a significant tourist attraction, featured in the flag of Cape Town and other local government insignia. Many visitors use the Table Mountain Aerial Cableway or hike to the top. The mountain forms part of the Table Mountain National Park.

Below the sandstone is a layer of micaceous shale, which weathers quite readily. The basement of folded metamorphic shales intruded by the Cape Granite are of late Precambrian age. 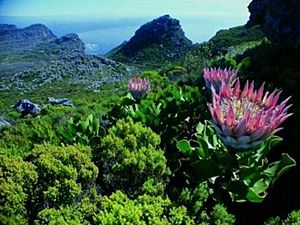 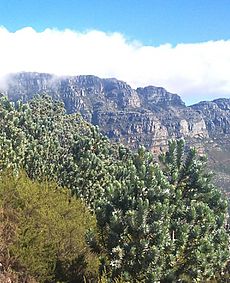 Silver trees (Leucadendron argenteum) only occur naturally on the granite and clay soils of the Cape Peninsula, surrounding Table Mountain and the Back Table. A few tiny patches, possibly planted there early in the Cape Colony's history, occur near Stellenbosch, Paarl and Somerset West. This photo was taken on Lion's Head, looking towards the Twelve Apostles. 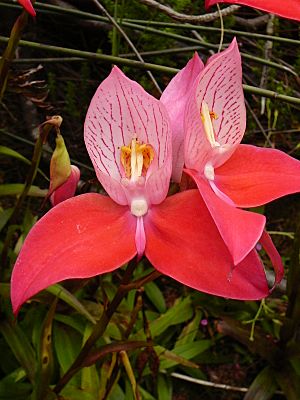 The Disa uniflora, also known as Pride of Table Mountain, is a showy orchid that blooms under waterfalls, along streamlets and seeps on the top and upper slopes of Table Mountain and the Back Table, in January–March. 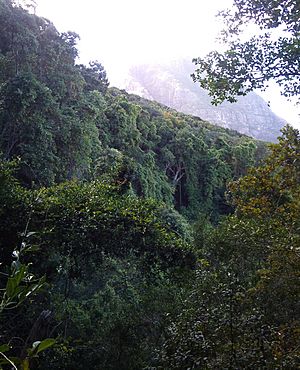 Indigenous forest on Table Mountain, with Devils Peak visible in the distance

Table Mountain's vegetation types form part of the Cape Floral Region protected areas. These protected areas are a World Heritage Site, and an estimated 2,285 species of plants are confined to Table Mountain and the Cape Peninsula range, of which a great proportion, including many species of proteas, are endemic to these mountains and valleys and can be found nowhere else. Of the 2,285 species on the Peninsula 1,500 occur in the 57 km2 area comprising Table Mountain and the Back Table, a number at least a large as all the plant species in the whole of the United Kingdom. The Disa uniflora, despite its restricted range within the Western Cape, is relatively common in the perennially wet areas (waterfalls, streamlets and seeps) on Table Mountain and the Back Table, but hardly anywhere else on the Cape Peninsula. It is a very showy orchid that blooms from January to March on the Table Mountain Sandstone regions of the mountain. Although they are quite widespread on the Back Table, the best (most certain, and close-up) place to view these beautiful blooms is in the "Aqueduct" off the Smuts Track, halfway between Skeleton Gorge and Maclear's Beacon.

Remnant patches of indigenous forest persist in the wetter ravines. However, much of the indigenous forest was felled by the early European settlers for fuel for the lime kilns needed during the construction of the Castle. The exact extent of the original forests is unknown, though most of it was probably along the eastern slopes of Devil's Peak, Table Mountain and the Back Table where names such as Rondebosch, Kirstenbosch, Klassenbosch and Witteboomen survive (in Dutch "bosch" means forest; and "boomen" means trees). Hout Bay (in Dutch "hout" means wood) was another source of timber and fuel as the name suggests. In the early 1900s commercial pine plantations were planted on these slopes all the way from the Constantiaberg to the front of Devil's Peak, and even on top of the mountains, but these have now been largely cleared allowing fynbos to flourish in the regions where the indigenous Afromontane forests have not survived, or never existed.

Fynbos is a fire adapted vegetation, and providing fires are not too frequent, regular or intense, they are important drivers of fynbos diversity. Regular fires have dominated fynbos for at least the past 12 000 years largely as a result of human activity. In 1495 Vasco da Gama named the South African coastline Terra de Fume because of the smoke he saw from numerous fires. This was originally probably to maintain a productive stock of edible bulbs (especially watsonians) and to facilitate hunting, and later, after the arrival of pastoralists, to provide fresh grazing after the rains. Thus the plants that make up fynbos today are those that have been subjected to a variety of fire regimes over a very long period time, and their preservation now requires regular burning. The frequency of the fires obviously determines precisely which mix of plants will dominate any particular region, but intervals of 10–15 years between fires are considered to promote the proliferation of the larger Protea species, a rare local colony of which, the Aulax umbellata (Family: Proteaceae), was wiped out on the Peninsula by more frequent fires, as have been the silky-haired pincushion, Leucospermum vestitum, the red sugarbush, Protea grandiceps and Burchell's sugarbush, Protea burchellii, although a stand of a dozen or so plants has recently been "rediscovered" in the saddle between Table Mountain and Devil's Peak. Some bulbs may similarly have become extinct as a result a too rapid sequence of fires. The fires that occur on the mountains today are still largely due to unregulated human activity. Fire frequency is therefore a matter of chance rather than conservation.

Despite intensive conservation efforts the Table Mountain range has the highest concentration of threatened species of any continental area of equivalent size in the world. The non-urban areas of the Cape Peninsula (mainly on the mountains and mountain slopes) have suffered particularly under a massive onslaught of invasive alien plants for well over a century, with perhaps the worst invader being the cluster pine, partly because it was planted in extensive commercial plantations along the eastern slopes of the mountains, north of Muizenberg. Considerable efforts have been made to control the rapid spread of these invasive alien trees. Other invasive plants include black wattle, blackwood, Port Jackson and rooikrans (All Australian members of the acacia family), as well as several Hakea species and bramble. 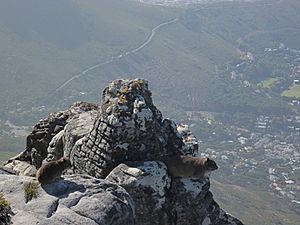 The most common mammal on the mountain was the dassie (the South African name, from Afrikaans, pronounced "dussy"), or rock hyrax. Between about 2000 and 2004 (no one is certain about the exact year or years) their numbers suddenly plummeted for unknown reasons. They used to cluster around the restaurant at the upper cable station, near areas where tourists discarded or (inadvisably supplied) food. The population crash of the dassies was in all probability responsible for the decline in the Verreaux's eagle population on the Peninsula, which is believed to have consisted of 3 breeding pairs during the period 1950 to 1990, with only 2 pairs, maximally, ever having been reported to fledge a chick each in any given year. With the commencement of formal monitoring in 1993, two breeding pairs were recorded on the Cape Peninsula Mountain Chain in 2004: one below the upper cable station at the western end of Table Mountain, in Blinkwater Ravine, the other on the cliffs below Noordhoek Peak. The nest near the cable station was abandoned in 2006, leaving only the Noordhoek pair, which continued to fledge chicks reasonably regularly till 2013, at which point one member of the pair disappeared. From 2013 till January 2017 only a single Verreaux's Eagle, presumed to be a female, remained on the Peninsula. She continued to maintain the nest under Noordhoek Peak, but seemed unable to attract a mate. But in early 2017 a pair of eagles was seen by at least 7 independent observers during the course of 10 days (27 January - 5 February). It remains to be seen whether they will breed later in the year. Dassies are an important part the Verreaux's eagle's prey on the Peninsula. (See Foot note)

Table Mountain is also home to porcupines, mongooses, snakes, lizards, tortoises, and a rare endemic species of amphibian that is only found on Table Mountain, the Table Mountain ghost frog. The last lion in the area was shot circa 1802. Leopards persisted on the mountains until perhaps the 1920s but are now extinct locally. Two smaller, secretive, nocturnal carnivores, the rooikat (caracal) and the vaalboskat (also called the vaalkat or Southern African wildcat) were once common in the mountains and the mountain slopes. The rooikat continues to be seen on rare occasions by mountaineers but the status of the vaalboskat is uncertain. The mountain cliffs are home to several raptors species, apart from the Verreaux's eagle. They include the jackal buzzard, booted eagle (in summer), African harrier-hawk, peregrine falcon and the rock kestrel. In 2014 there were four pairs of African fish eagles on the Peninsula, but they nest in trees generally as far away from human habitation and activity as is possible on the Peninsula. Their numbers in 2017 is unknown.

Up until the late 1990s baboons occurred on all the mountains of the Peninsula, including the Back Table immediately behind Table Mountain. Since then they have abandoned Table Mountain and the Back Table, and only occur south of Constantia Nek. They have also abandoned the tops of many of the mountains, in favor of the lower slopes, particularly when these were covered in pine plantations which seemed to provide them with more, or higher quality food than the fynbos on the mountain tops. However these new haunts are also within easy reach of Cape Town's suburbs, which brings them into conflict with humans and dogs, and the risk of traffic accidents. There are now (2014) a dozen troops on the Peninsula, varying in size from 7 to over 100 individuals, scattered on the mountains from the Constantiaberg to Cape Point. The baboon troops are the subject of intense research into their physiology, genetics social interactions and habits. In addition, their sleeping sites are noted each evening, so that monitors armed with paint ball guns can stay with the troop all day, to ward them off from wandering into the suburbs. From when this initiative was started in 2009 the number of baboons on the Peninsula has increased from 350 to 450, and the number of baboons killed or injured by residents has decreased. 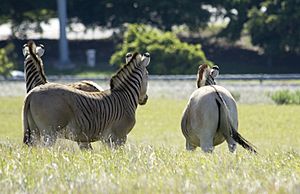 Rau quagga in the animal camp on the slopes of Devil's Peak, above Groote Schuur Hospital.

Himalayan tahrs, fugitive descendants of tahrs that escaped from Groote Schuur Zoo in 1936, used to be common on the less accessible upper parts of the mountain. As an exotic species, they were almost eradicated through a culling programme initiated by the South African National Parks to make way for the reintroduction of indigenous klipspringers. Until recently there were also small numbers of fallow deer of European origin and sambar deer from southeast Asia. These were mainly in the Rhodes Memorial area but during the 1960s they could be found as far afield as Signal Hill. These animals may still be seen occasionally despite efforts to eliminate or relocate them. 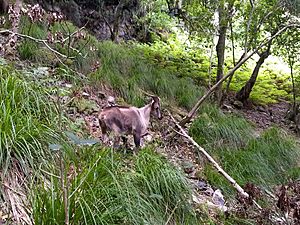 On the lower slopes of Devil's Peak, above Groote Schuur Hospital an animal camp bequeathed to the City of Cape Town by Cecil John Rhodes has been used in recent years as part of the Quagga Project. The quagga used to roam the Cape Peninsula, the Karoo and the Free State in large numbers, but were hunted to extinction during the early 1800s. The last quagga died in an Amsterdam zoo in 1883. In 1987 a project was launched by Reinhold Rau to back-breed the quagga, after it had been established, using mitochondrial DNA obtained from museum specimens, that the quagga was closely related to the plains zebra, and on 20 January 2005 a foal considered to be the first quagga-like individual because of a visible reduced striping, was born. These quagga-like zebras are officially known as Rau quaggas, as no one can be certain that they are anything more than quagga look-alikes. The animal camp above Groote Schuur Hospital has several good looking Rau quaggas, but they are unfortunately not easily seen except from within the game camp, which is quite large and undulating, and the animals are few. The animal camp is not open to the public.

All content from Kiddle encyclopedia articles (including the article images and facts) can be freely used under Attribution-ShareAlike license, unless stated otherwise. Cite this article:
Table Mountain Facts for Kids. Kiddle Encyclopedia.