A leopard(Panthera pardus) is a big feline of the genus Panthera. It lives in Africa and Asia. The leopard gets its name from the ancient Greek words for "lion" (leon) and "panther" (pard).

Unlike lions, they do not live in groups. The adult males live separately, and the females live only with their cubs. They live in habitats where there are some trees. They climb trees well, and do so regularly. They can carry prey up a tree and keep it safe from hyaenas and lions. Trees are its main escape from attacks by lions or packs of dogs. It is an ambush predator, and operates best where it has some cover.

The most similar cat in its lifestyle is the jaguar, which lives in Central and South America. 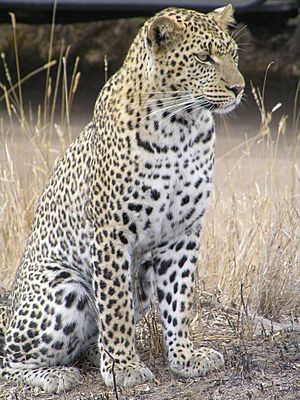 The leopard's skin colour varies by climate and habitat from pale yellow to yellowish brown or golden. Leopards living in forests are darker than those in arid habitats. Spots fade toward the white underbelly and the insides and lower parts of the legs. Rosettes are most prominent on the back, flanks and hindquarters. The pattern of the rosettes is unique in each individual. Rosettes are circular in East African leopard populations, and tend to be squarish in Southern African and larger in Asian leopard populations. There are also often leopards who are completely black, those are also called black panthers.

The leopard is often confused with the cheetah; however, the cheetah is marked with small round spots instead of the larger rosettes. The fur tends to be grayish tones in colder climates, and to a darker golden hue in rainforest habitats. 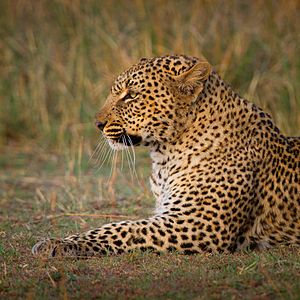 Its white-tipped tail is about 60–100 centimetres (24–39 in) long, white underneath and with spots that form incomplete bands toward the tails's end. Its fur is generally soft and thick, notably softer on the belly than on the back. It tends to grow longer in colder climates. Juveniles have woolly fur, and appear dark due to the densely arranged spots.

Males are larger and heavier than females. While males weigh 37–90 kg (82–198 lb), females weigh 28–60 kg (62–132 lb). These measurements vary geographically. Usually, leopards are larger in areas where they are at the top of the food chain, with no competitive restriction from larger predators such as the lion and tiger. The maximum weight of a leopard is about 96 kg (212 lb). 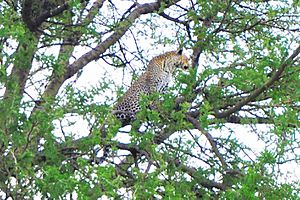 Originally the leopard lived in all of Africa (but not in the Sahara) and southern Asia. But today many leopard subspecies, especially in Asia, are endangered. Leopards live in a lot of different environments: rainforests, forests, mountains and savannas. Populations in southwest and central Asia are small and fragmented; in the northeast, they are critically endangered. In the Indian subcontinent, Southeast Asia, and China, leopards are still relatively abundant. Of the species as a whole, its numbers are greater than those of other Panthera species, all of which face more acute conservation concerns.

Leopards are exceptionally adaptable, although associated primarily with savanna and rainforest. Populations thrive anywhere in the species range where grasslands, woodlands, and forests remain largely undisturbed. In the Russian Far East, they inhabit temperate forests where winter temperatures reach a low of −25 °C (−13 °F). They are equally adept surviving in some of the world's most humid rain-forests and even semi-arid desert edges. 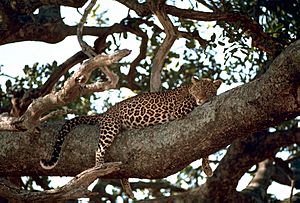 Leopard resting on a tree

Leopards in west and central Asia avoid deserts and areas with long snow cover and areas close to urban centres. In India, leopard populations sometimes live quite close to human settlements and even in semi-developed areas. Although occasionally adaptable to human disturbances, leopards require healthy prey populations and appropriate vegetative cover for hunting for prolonged survival and thus rarely linger in heavily developed areas. Due to the leopard's superlative stealthiness, people often remain unaware that big cats live in nearby areas. 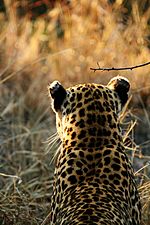 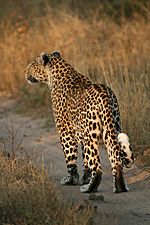 Leopards are active mainly from dusk till dawn and rest for most of the day and for some hours at night in thickets, among rocks or over tree branches. Leopards have been observed walking 1–25 km (0.62–15.53 mi) across their range at night; they may even wander up to 75 km (47 mi) if disturbed. In some regions, they are nocturnal. In western African forests, they have been observed to be largely diurnal and hunting during twilight, when their prey animals are active; activity patterns varies between seasons.

Leopards are known for their ability to climb and have been observed resting on tree branches during the day, dragging their kills up trees and hanging them there, and descending from trees headfirst. They are powerful swimmers, although are not as disposed to swimming as some other big cats, such as the tiger. They are very agile, and can run at over 58 km/h (36 mph), leap over 6 m (20 ft) horizontally, and jump up to 3 m (9.8 ft) vertically.

The leopard is solitary and territorial. Adults associate only in the mating season. Females continue to interact with their offspring even after weaning, and have been observed sharing kills with their offspring when they can not obtain any prey. In Kruger National Park, most leopards tend to keep 1 km (0.62 mi) apart. Males interact with their partners and cubs at times, and exceptionally this can extend beyond to two generations. Aggressive encounters are rare, typically limited to defending territories from intruders.

Leopards communicate with each other in tall grass using white spots on their ears and tails. They produce a number of vocalisations, including growls, snarls, meows and purrs. The roaring sequence in leopards consists mainly of grunts and is also known called "sawing", having been described as resembling the sound of sawing wood. Cubs are known to call their mother with a urr-urr sound.

Caching kill in a tree

The leopard depends mainly on its acute senses of hearing and vision for hunting. It primarily hunts at night in most areas. In western African forests and Tsavo National Park, leopards have been also observed hunting by day. The leopard is a carnivore that prefers medium-sized prey, more than 100 prey species were recorded that tigers will eat.

The leopard stalks the prey and tries to approach as close as possible, typically within 5 m (16 ft) to the target, and finally pounces on it and kills it by suffocation. It kills small prey with a bite on the back of the neck, but holds larger animals by the throat and strangles them. It is able to take large prey due to its massive skull and powerful jaw muscles, and is therefore strong enough to drag carcasses heavier than itself up into trees; an individual was seen to haul a young giraffe into a tree.

Leopards tend to eat antelopes and similarly sized herd animals. They avoid the larger herbivores, such as water buffalo, because the larger beasts can only be safely captured by groups of animals that hunt in teams, such as lions. Leopards also eat smaller animals including rodents, rabbits, and even large insects.

Small prey is eaten immediately, while larger carcasses are dragged over several hundred metres and safely stored in trees, bushes or even caves to be consumed later. The way the kill is stored depends on the local area and individual preferences; while trees are preferred in Kruger National Park, bushes are preferred in the plain terrain of the Kalahari.

A study estimated average daily consumption rates at 3.5 kg (7.7 lb) for males and 2.8 kg (6.2 lb) for females. A study in the southern Kalahari showed that leopards met their water requirements by the bodily fluids of prey and succulent plants; they drink water every two to three days, and feed infrequently on moisture-rich plants. 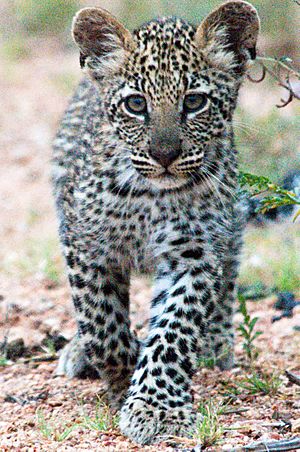 Gestation lasts for 90 to 105 days. Cubs are usually born in a litter of 2–4 cubs. Females give birth in a cave, crevice among boulders, hollow tree, or thicket to make a den. Cubs are born with closed eyes, which open four to nine days after birth. The fur of the young tends to be longer and thicker than that of adults. Around three months of age, the young begin to follow the mother on hunts. At one year of age, leopard young can usually fend for themselves, but remain with the mother for 18–24 months.

There are nine subspecies of leopards recognized today, one in Africa and eight in Asia: 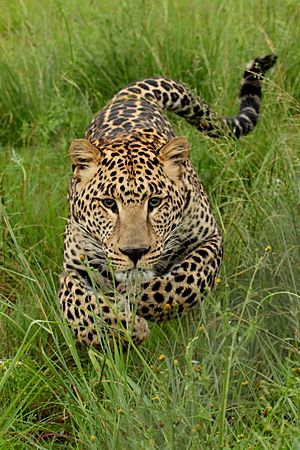 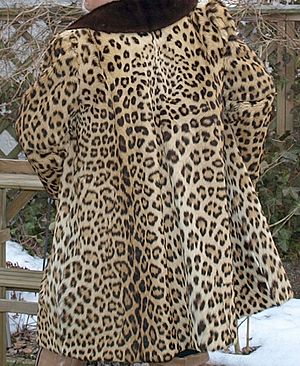 Leopards have been known to humans throughout history, and have featured in the art, mythology, and folklore of many countries where they have historically occurred, such as ancient Greece, Persia, and Rome, as well as some where they have not existed for several millennia, such as England. The modern use of the leopard as an emblem for sport or a coat of arms is much more restricted to Africa, though numerous products worldwide have used the name.

During the Benin Empire, the leopard was commonly represented on engravings and sculptures and was used to symbolise the power of the king or oba; since the leopard was considered the king of the forest. As a result of their association with kings in Africa, the leopard's pelt is often seen today as a symbol of aristocratic rank, chiefs using it as a part of their traditional regalia.

The lion passant guardant or leopard is a frequently used charge in heraldry, most commonly appearing in groups of three. 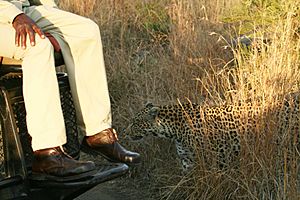 In protected areas of several countries, wildlife touring programs and safari ventures offer sightings of leopards in their natural habitat. While luxury establishments may boast the fact that wild animals can be seen at close range on a daily basis, the leopard's camouflage and ability to hide and stalk prey typically make leopard sightings rare. In Sri Lanka's Yala National Park, leopards have been ranked by visitors to be among the least visible of all animals in the park despite their high concentration in the reserve.

All content from Kiddle encyclopedia articles (including the article images and facts) can be freely used under Attribution-ShareAlike license, unless stated otherwise. Cite this article:
Leopard Facts for Kids. Kiddle Encyclopedia.