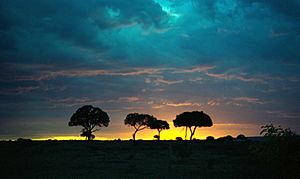 Sunset on the Mara 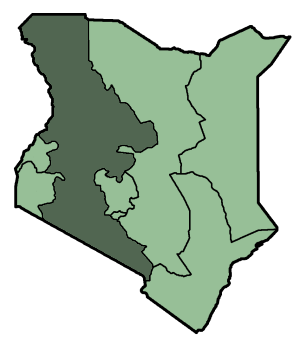 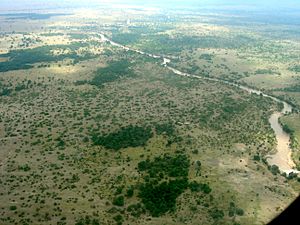 View of the Mara River 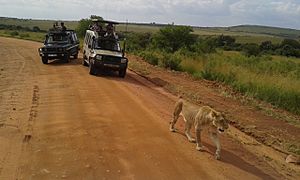 Masai Mara National Reserve is a National Park in Kenya, East Africa. It was established in 1948 as a wildlife sanctuary, and has been made larger since then.

Masai Mara is a game reserve type of park, meant to protect the animals on the savannah of the Serengeti. It is named after the Maasi people, who are the traditional people of the area. Big as it is, the Masai Mara National Reserve is only a fraction of the Greater Mara Ecosystem.

The Mara is effectively the northern continuation of the Serengeti National Park game reserve in Tanzania.

This natural event is famous for involving a great population of large mammals. Huge numbers of herbivores migrate each year, followed by the big cats. The zebra, Thomson's gazelle, wildebeest, African buffalo, giraffe, elephants and others arrive to eat fresh grass after the rain, and later move on. Lions, leopards, cheetahs follow, and also vultures and hyaenas. hippos and Nile crocodiles are in the rivers. It is called The Great Migration.

The Great Migration is one of the most impressive natural events worldwide. Taking part each year are some 1,300,000 wildebeest, 500,000 Thomson's gazelles, 97,000 Topi, 18,000 eland, and 200,000 zebra. These plant-eating migrants are followed along their annual, circular route by hungry predators, most notably lions and hyena.

More than 470 species of birds have been identified in the park, many of which are migrants. Almost 60 species are raptors (birds of prey). Birds that call this area home for at least part of the year include: vultures, marabou storks, secretary birds, hornbills, crowned cranes, ostriches, long-crested Eagles, African pygmy-falcons and the lilac-breasted roller, which is the national bird of Kenya

All content from Kiddle encyclopedia articles (including the article images and facts) can be freely used under Attribution-ShareAlike license, unless stated otherwise. Cite this article:
Masai Mara Facts for Kids. Kiddle Encyclopedia.