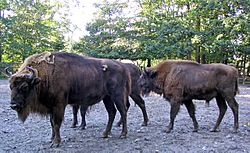 Bison are a large, even-toed ungulate. They are bovines, similar to cows. They are often called buffalo, but are not closely related to African buffalo or water buffalo.

Bison live in the northern part of the world. The American bison lives in North America where they formerly wander around the prairies in huge herds. The wisent lives in Europe. Bison can also live in rugged areas.

They are the biggest mammals in North America. There used to be as many as 30 million bison in the United States, but because of hunting, by 1890, only 1,000 bison were left. Through conservation efforts, there are now more American bison than there used to be, but still far fewer than there were before the 1800s.

European bison (wisent) tend to live in lightly wooded to fully wooded areas and areas with increased shrubs and bushes, though they can also live on grasslands and plains.

They are classified in the subfamily Bovinae of the family Bovidae

They live to be about 20 years old and are born without their "hump" or horns, which both males and females have. After shedding their light colored hair, and with their horns, they are grown at 2 to 3 years of age, but the males keep growing slowly until about age seven. Adult bulls are very dominant in mating season. Adult bison usually have one or two baby bison.

All content from Kiddle encyclopedia articles (including the article images and facts) can be freely used under Attribution-ShareAlike license, unless stated otherwise. Cite this article:
Bison Facts for Kids. Kiddle Encyclopedia.