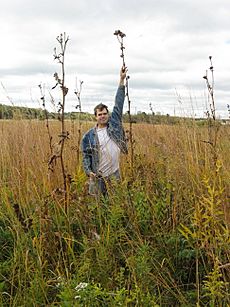 A prairie is a type of habitat with mostly grasses, but also flowering plants and occasional shrubs or isolated trees. This type of habitat can be found around the world, but it goes by different names, such as steppes in Asia. The word prairie generally means grasslands in North America. There are often many animals on a prairie, that either prefer a prairie or can only live in a prairie. Some that are well known are the American bison (also called the buffalo) and the pronghorn antelope. Birds include the bobolink and meadowlark. 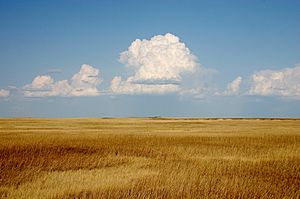 Prairie, Badlands National Park, South Dakota, USA, is in the mixed grasslands region containing some species of tall grass and some of short grass

A tall grass prairie has plants and grasses that typically grow three to seven feet (one to two meters) high, with occasional plants growing higher. This type of prairie grows in areas with a good amount of rain. Illinois (the prairie state), Indiana and Iowa are good examples of where a tall grass prairie would be. This type of habitat usually has rich soil and is very good for farming. Much of the original prairie has been changed into crops or lost to brush and trees.

Trees can grow in this area, but most were stopped by fires that would sweep through. Some oaks and hickories could survive a prairie fire. If there are scattered trees, it is called a savanna, and an area in a prairie where trees grew closer together is called a grove. In the last century, fires have been stopped, and trees and brush that once did not grow in prairies are taking over. Some of this brush was accidentally introduced from Europe or elsewhere. In Illinois, less than 0.01% of the original prairie still exists. For this reason, conservationists in this area practice prairie restoration to bring the prairie back. 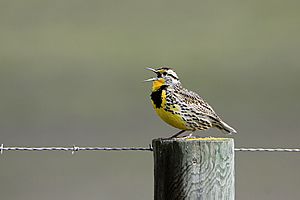 Short grass prairie is in drier areas, and is usually one to two feet (0.3 to 0.6 meters) high and has more space between plants. The American West (from central Texas up into Canada, east of the arid semi-desert) is all short grass prairie. Much of this area is converted to pastures for grazing cows and sheep. Areas near rivers are irrigated for crops. Some of the original native plants are still widespread.

All content from Kiddle encyclopedia articles (including the article images and facts) can be freely used under Attribution-ShareAlike license, unless stated otherwise. Cite this article:
Prairie Facts for Kids. Kiddle Encyclopedia.