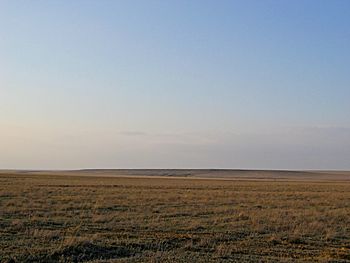 A steppe in Western Kazakhstan in early spring

In physical geography, a steppe is a plain without trees (apart from those near rivers and lakes). It is similar to a short-grass prairie, although a prairie is generally considered as North America, and the steppe is in eastern Europe and central Asia. Sometimes the short-grass prairie in North America is also called a steppe. Similar places in Africa are called savanna. The world's largest steppe, sometimes called The Great Steppe, is in Russia.

The Mongolian Steppe, also known as the Eastern Steppe, is located in northern Mongolia. It is between the Altai Mountains in the west and the Greater Khingan Region in the east.

It may be semi-desert, or covered with grass or shrubs or both, depending on the season and latitude. It is the sort of climate that is in regions too dry for a forest, but not so dry that there are only deserts. The soil is too moist for a desert, but too dry for normal forest life. Steppes receive slightly more rain than deserts do. The climates in steppes are usually temperate. They are pretty dry because there is very minimal rain.

This is an open area, and often there were long distances between places with good water. People who lived in this type of area were often nomads, often traveling by horses. Genghis Khan was a great warrior from Mongolia who lived on the steppe. The majority of people in the steppe are nomads. Families in Mongolia live in "gers" which is a large portable tent. Mongolians are also master horse riders so many families own many horses that roam the steppe. The people in the steppe interact with the steppe with using the animals there for there food and drink. They also have a very prominent musical culture with a wide variety of traditional Mongolian songs.

In the United States, the cowboy herded cattle in the steppe, moving from place to place by horse. During the Dust Bowl in the 1930s in North America, farmers who had recently settled on the land and started farms suddenly found themselves without food. Many of them left. Eventually they learned to plow differently and plant crops that survived a drought better, and to plant trees in rows called windbreaks.

All content from Kiddle encyclopedia articles (including the article images and facts) can be freely used under Attribution-ShareAlike license, unless stated otherwise. Cite this article:
Steppe Facts for Kids. Kiddle Encyclopedia.