Kazakhstan (Kazakh: Қазақстан, or Kazakh: Qazaqstan; Russian: Казахстан), officially the Republic of Kazakhstan (Kazakh: Qazaqstan Respublikasy) is a country located mainly in Central Asia. It borders Russia in the north and west, China in the east, and Kyrgyzstan, Uzbekistan, and Turkmenistan in the south. The capital is Nur-Sultan, formerly known as Astana. It was moved from Almaty, the country's largest city, in 1997. Kazakhstan is the world's largest landlocked country, the world's largest Muslim-majority country by land area (and the northernmost), and the ninth-largest country in the world. It has a population of 18.8 million, and one of the lowest population densities in the world, at fewer than 6 people per square kilometre (15 people per sq mi).

The territory of Kazakhstan has historically been inhabited by nomadic groups and empires. In antiquity, the nomadic Scythians inhabited the land and the Persian Achaemenid Empire expanded towards the southern territory of the modern country. Turkic nomads, who trace their ancestry to many Turkic states such as the First and Second Turkic Khaganates, have inhabited the country starting from the 6th century. In the 13th century, the territory was subjugated by the Mongol Empire under Genghis Khan. In the 15th century, Kazakh Khanate would conquer much lands that would later form territories of modern Kazakhstan. By the 16th century, the Kazakhs emerged as a distinct group, divided into three jüz. The Kazakhs would raid territory of Russia throughout the 18th century, causing the Russians to advance into the Kazakh steppe, and by the mid-19th century, they nominally ruled all of Kazakhstan as part of the Russian Empire. Following the 1917 Russian Revolution, and subsequent civil war, the territory of Kazakhstan was reorganised several times. In 1936, it was made the Kazakh Soviet Socialist Republic, part of the Soviet Union. Kazakhstan was the last of the Soviet republics to declare independence during the dissolution of the Soviet Union in 1991. Human rights organisations have described the Kazakh government as authoritarian, and regularly describe Kazakhstan's human rights situation as poor.

Kazakhstan is the most dominant nation of Central Asia economically and politically, generating 60% of the region's GDP, primarily through its oil and gas industry. It also has vast mineral resources, and is officially a democratic, secular, unitary, constitutional republic with a diverse cultural heritage. Kazakhstan is a member of the United Nations (UN), WTO, CIS, the Shanghai Cooperation Organization (SCO), the Eurasian Economic Union, CSTO, OSCE, OIC, CCTS, and TURKSOY. 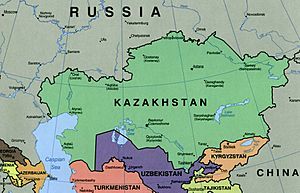 Kazakhstan has borders with the Russian Federation in the north and west, Turkmenistan, Uzbekistan and Tajikistan in the southwest, and China in the far east. There is a point of contact with Mongolia in the far east and, for the most part, it has Siberia to the north (which, of course, is part of Russia). Russia therefore has the longest border with Kazakhstan. Basically, Kazakhstan runs from the Caspian Sea in the west to the mainly Muslim Chinese autonomous region of Xinjiang.

Kazakhstan has no ocean shoreline, but borders the Caspian Sea, which boats use to get to neighboring countries. The Caspian Sea is an Endorheic basin without connections to any ocean.

Kazakhstan has plenty of petroleum, natural gas, and mining. It attracted over $40 billion in foreign investment since 1993 and accounts for some 57% of the nation's industrial output. According to some estimates, Kazakhstan has the second largest uranium, chromium, lead, and zinc reserves, the third largest manganese reserves, the fifth largest copper reserves, and ranks in the top ten for coal, iron, and gold. It is also an exporter of diamonds. Kazakhstan has the 11th largest proven reserves of both petroleum and natural gas. 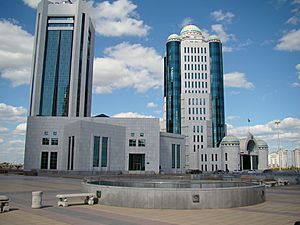 Almaty and Astana cities have the status of State importance and are not in any province. Baikonur city has a special status because it is currently being leased to Russia with Baikonur cosmodrome until 2050.

Each province is headed by an Akim (provincial governor) appointed by the president. Municipal Akims are appointed by province Akims. The Government of Kazakhstan moved its capital from Almaty to Astana on December 10, 1997. 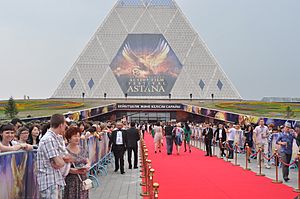 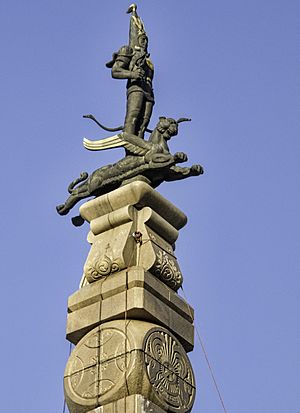 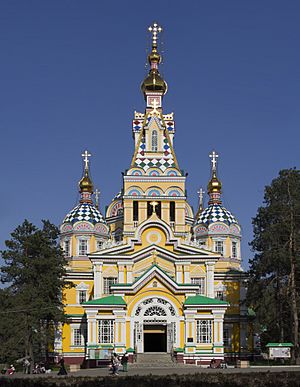 Eastern Orthodoxy is the second largest religion in Kazakhstan

All content from Kiddle encyclopedia articles (including the article images and facts) can be freely used under Attribution-ShareAlike license, unless stated otherwise. Cite this article:
Kazakhstan Facts for Kids. Kiddle Encyclopedia.