The Pallas's cat also called manul, is a small wild cat with a broad but fragmented distribution in the grasslands and montane steppes of Central Asia.

These are the oldest living species of cat, traceable in the fossil record to 10 million years ago. They were once thought to be the ancestor of the domestic cat Persian breed because of their highly unusual face. It is negatively affected by habitat degradation, prey base decline and hunting, and has therefore been classified as Near Threatened on the IUCN Red List since 2002.

The Pallas's cat was first described in 1776 by the German naturalist Peter Simon Pallas. 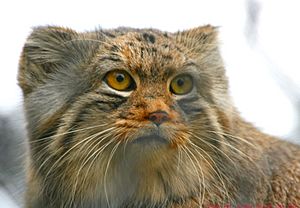 The ears are set low and wide apart

The Pallas's cat is about the size of a domestic cat. Its body is 46 to 65 cm (18 to 26 in) long and its tail 21 to 31 cm (8.3 to 12.2 in) . It weighs 2.5 to 4.5 kg (5.5 to 9.9 lb). The combination of its stocky posture and long, dense fur makes it appear stout and plush. Its fur is ochre with dark vertical bars on the torso and forelegs. The winter coat is greyer and less patterned than the summer coat. There are clear black rings on the tail and dark spots on the forehead. The cheeks are white with narrow black stripes running from the corners of the eyes. The chin and throat are also white, merging into the greyish, silky fur of the underparts. 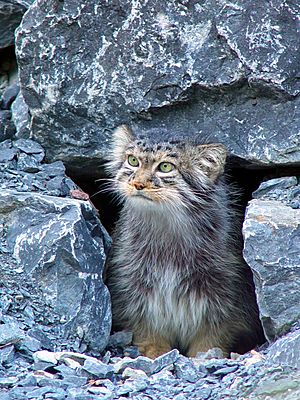 Pallas's cat at the Zurich Zoo

The legs are proportionately shorter than those of other cats, the ears are set very low and wide apart, and the claws are unusually short. The face is shortened compared with other cats, giving it a flattened look. The pupils are circular rather than vertical slits. The short jaw has fewer teeth than is typical among cats, with the first pair of upper premolars missing, but the canine teeth are large.

The Pallas's cat is native to the steppe regions of Central Asia, where it inhabits elevations of up to 5,050 m (16,570 ft) in the Tibetan Plateau. It is also found in parts of Afghanistan, Mongolia, Tajikistan, Kyrgyzstan, Nepal, India, Kazakhstan, and Pakistan, and occur across much of western China.

In the south of Russia it occurs in the Transbaikal Krai, and, less frequently, in the Altai, Tyva, and Buryatia Republics. In 1997, it was reported for the first time as being present in the eastern Sayan Mountains.

Populations in the Caspian Sea region, in Afghanistan and Pakistan, are thought to be declining and becoming increasingly isolated. 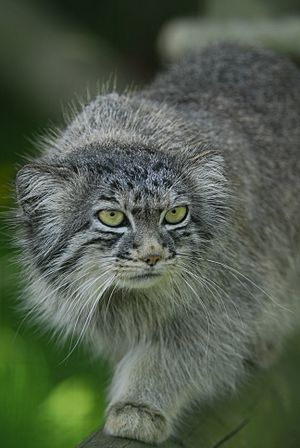 Pallas's cats are solitary. Both males and females scent mark their territory. They spend the day in caves, rock crevices, or marmot burrows, and emerge in the late afternoon to begin hunting.

Pallas hunt by night, from the ground, and seek small mammals and birds. They feed largely on diurnally active prey species such as gerbils, pikas, voles and chukar partridges, and sometimes catch young marmots. They are not fast runners, and hunt primarily by ambush or stalking, using low vegetation and rocky terrain for cover.

Pallas's cats give birth to a litter of around two to six kittens after a gestation period of 66 to 75 days, typically in April or May. Such large litters may compensate for a high rate of infant mortality in the harsh environment.

The young are born in sheltered dens lined with dried vegetation, feathers, and fur. The kittens weigh around 90 g (3.2 oz) at birth, and have a thick coat of fuzzy fur, which is replaced by the adult coat after around two months. They are able to begin hunting at four months, and reach adult size at six months. Pallas's cats have been reported to live up to 11 years in captivity. 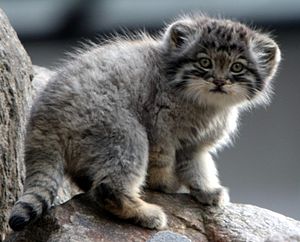 The Pallas cat has been hunted for its fur in relatively large numbers in China, Mongolia, and Russia; international trade in manul pelts largely ceased since the late 1980s. About 1,000 hunters of Pallas's cats remain in Mongolia, with a mean estimated take of 2,000 cats per year. Cats are also shot when mistaken for the commonly hunted marmot, and trapped incidentally in both legholds set for wolves and foxes and snares set for marmots and hares. They are also killed by herding dogs. Their fat and organs are used as medicine in Mongolia and Russia. While Mongolia has not recorded any trophy exports, pelt exports have grown since 2000, with 143 reported exported in 2007. 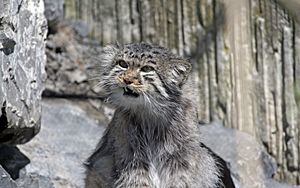 The Pallas's cat is listed in CITES Appendix II. Hunting is prohibited in all range countries except Mongolia, where the species has no legal protection despite being classified as Near Threatened in the country. Since 2009, it is legally protected in Afghanistan, where all hunting and trade in its parts is banned.

The cat is being studied in the Daursky Nature Reserve in Russia to obtain new information about habitats and migrations, and to estimate the survival rate of kittens and adult cats.

As of 2010, there were 47 Pallas's cats in 19 member institutions of the Association of Zoos and Aquariums. Keeping Pallas's cats healthy in captivity is difficult. They breed well, but survival rates are low owing to infections, which are attributed to an underdeveloped immune system and exposure to viruses not present in their natural high-altitude habitat.

All content from Kiddle encyclopedia articles (including the article images and facts) can be freely used under Attribution-ShareAlike license, unless stated otherwise. Cite this article:
Pallas's cat Facts for Kids. Kiddle Encyclopedia.