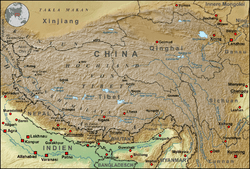 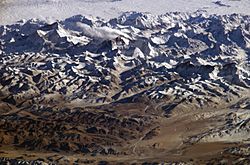 The Tibetan Plateau, also known as the Qinghai-Tibetan (Qingzang) Plateau, is a vast, high plateau in Central Asia. It covers most of the Tibet Autonomous Region, the Qinghai Province in China, and Ladakh in Kashmir, India.

The Tibetan Plateau occupies an area of around 1,000 by 2,500 kilometers, and has an average elevation of over 4,500 meters. It is the highest and largest plateau in the world.

It was formed by the same forces which formed the Himalayas, namely, the movement of the Indian continental plate into Asia. The Plateau has an great effect on climate, and is the main cause of the monsoon rains.

All content from Kiddle encyclopedia articles (including the article images and facts) can be freely used under Attribution-ShareAlike license, unless stated otherwise. Cite this article:
Tibetan Plateau Facts for Kids. Kiddle Encyclopedia.