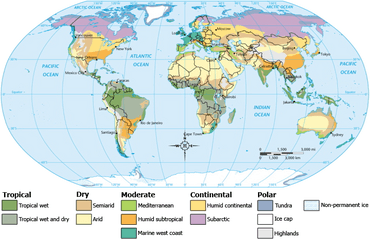 Climate means the usual condition of the temperature, humidity, atmospheric pressure, wind, rainfall, and other meteorological elements in an area of the Earth's surface for a long time. Climate is different from weather. Weather is the condition of these elements right now, for shorter periods of time that are up to two weeks.

The latitude, ground, and height can change the climate of a location. It is also important to note if oceans or other large bodies of water are nearby. Climates are most commonly classified by temperature and precipitation. The most commonly used classification was the Köppen climate classification, first made by Wladimir Köppen. The Thornthwaite system, which was used from 1948, not only uses temperature and precipitation information, but evapotranspiration too. This makes it useful for studying how many different kinds of animal species there are, and about the things that could happen when climates change. The Bergeron and Spatial Synoptic Classification systems focus more on where the air masses which help make climates come from. 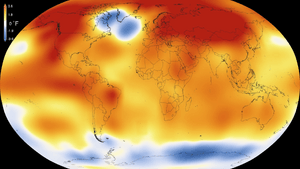 Climates can change after a long time. Recently, the world may be becoming warmer, as is discussed in global warming.

In recent usage, especially in the context of environmental policy, the term "climate change" often refers only to changes in modern climate, including the rise in average surface temperature known as global warming. In some cases, the term is also used with a presumption of human causation.

Climate change is the variation in global or regional climates over time. It reflects changes in the variability or average state of the atmosphere over time scales ranging from decades to millions of years. These changes can be caused by processes internal to the Earth, external forces (e.g. variations in sunlight intensity) or, more recently, human activities.

The climate of a place is given names such as below:

Monthly average surface temperatures from 1961–1990. This is an example of how climate varies with location and season 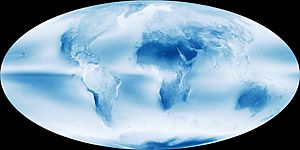 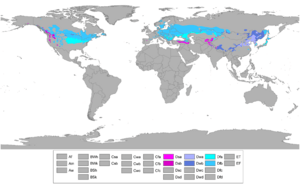 All content from Kiddle encyclopedia articles (including the article images and facts) can be freely used under Attribution-ShareAlike license, unless stated otherwise. Cite this article:
Climate Facts for Kids. Kiddle Encyclopedia.