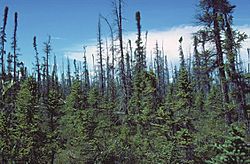 The taiga (IPA pronunciation: from Mongolian) is a large area of coniferous forests. It covers most of inland Alaska, Canada, Sweden, Finland, inland Norway, northern Kazakhstan and Russia (especially Siberia), as well as parts of the extreme northern continental United States.

In Canada, boreal forest is the term used to refer to the southern part of these forests, while "taiga" is used to describe the northern areas south of the Arctic tree line.

The climate is cold winters and cool summers. 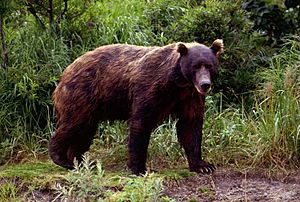 Brown bear, Kamchatka peninsula. Brown bears are among the largest and most widespread taiga omnivores.

The boreal forest, or taiga, supports a relatively small range of animals due to the harshness of the climate. Canada's boreal forest includes 85 species of mammals, 130 species of fish, and an estimated 32,000 species of insects. Insects play a critical role as pollinators, decomposers, and as a part of the food web. Many nesting birds rely on them for food in the summer months. The cold winters and short summers make the taiga a challenging biome for reptiles and amphibians, which depend on environmental conditions to regulate their body temperatures, and there are only a few species in the boreal forest including red-sided garter snake, common European adder, blue-spotted salamander, northern two-lined salamander, Siberian salamander, wood frog, northern leopard frog, boreal chorus frog, American toad, and Canadian toad. Most hibernate underground in winter. Fish of the taiga must be able to withstand cold water conditions and be able to adapt to life under ice-covered water. Species in the taiga include Alaska blackfish, northern pike, walleye, longnose sucker, white sucker, various species of cisco, lake whitefish, round whitefish, pygmy whitefish, Arctic lamprey, various grayling species, brook trout (including sea-run brook trout in the Hudson Bay area), chum salmon, Siberian taimen, lenok and lake chub.

The taiga is home to a number of large herbivorous mammals, such as moose and reindeer/caribou. Some areas of the more southern closed boreal forest also have populations of other deer species such as the elk (wapiti) and roe deer. The largest animal in the taiga is the wood bison, found in northern Canada, Alaska and has been newly introduced into the Russian far-east. Small mammals of the Taiga biome include rodent species including beaver, squirrel, North American porcupine and vole, as well as a small number of lagomorph species such as snowshoe hare and mountain hare. These species have adapted to survive the harsh winters in their native ranges. Some larger mammals, such as bears, eat heartily during the summer in order to gain weight, and then go into hibernation during the winter. Other animals have adapted layers of fur or feathers to insulate them from the cold. Predatory mammals of the taiga must be adapted to travel long distances in search of scattered prey or be able to supplement their diet with vegetation or other forms of food (such as raccoons). Mammalian predators of the taiga include Canada lynx, Eurasian lynx, stoat, Siberian weasel, least weasel, sable, American marten, North American river otter, European otter, American mink, wolverine, Asian badger, fisher, gray wolf, coyote, red fox, brown bear, American black bear, Asiatic black bear, polar bear (only small areas at the taiga – tundra ecotone) and Siberian tiger.

More than 300 species of birds have their nesting grounds in the taiga. Siberian thrush, white-throated sparrow, and black-throated green warbler migrate to this habitat to take advantage of the long summer days and abundance of insects found around the numerous bogs and lakes. Of the 300 species of birds that summer in the taiga only 30 stay for the winter. These are either carrion-feeding or large raptors that can take live mammal prey, including golden eagle, rough-legged buzzard (also known as the rough-legged hawk), and raven, or else seed-eating birds, including several species of grouse and crossbills.

All content from Kiddle encyclopedia articles (including the article images and facts) can be freely used under Attribution-ShareAlike license, unless stated otherwise. Cite this article:
Taiga Facts for Kids. Kiddle Encyclopedia.