The Seney National Wildlife Refuge is a managed wetland in Schoolcraft County in the U.S. state of Michigan. It has an area of 95,212 acres (385 km2). It is bordered by M-28 and M-77. The nearest town of any size is Seney, Michigan. The refuge contains the Seney Wilderness Area and the Strangmoor Bog National Natural Landmark within its boundaries.

While the Seney National Wildlife Refuge is oriented towards maintaining living space for bird life, river otters, beavers, moose, black bears and wolves also live in the refuge. 211 separate species of birds have been logged at Seney, including ducks, bald eagles, trumpeter swans, osprey, sandhill cranes, and common loons. On the western side of the National Wildlife Refuge, a parcel is officially designated as a wilderness with an area of 25,150 acres (102 km2).

The Seney NWR's western wilderness area, designated by federal law as the Seney Wilderness Area, includes the Strangmoor Bog National Natural Landmark. The Strangmoor Bog was landmarked as being the best surviving example in the 48 states of a sub-arctic patterned bog ecosystem, characterized by rapid glacial meltoff from an exposed sandy plain. The friable sand, exposed to the weather, was sculpted by wind and water into parallel strips of dune highland and wetland.

The Seney National Wildlife Refuge is built upon the remains of the Great Manistique Swamp, a perched sand wetland located in the central Upper Peninsula. After its forests were heavily exploited in 1880-1910, promoters attempted to drain the swamp for farmland. The drainage was a failure and left the wetland criss-crossed with canals, ditches, and drainage ponds. Much of the property was then abandoned for unpaid property taxes.

During the 1930s, work crews employed by the Civilian Conservation Corps (CCC) rebuilt, restored, and expanded the wetland drains, this time for active wetlands management purposes. These CCC ponds and drains are still used by the wetlands managers that staff the current National Wildlife Refuge. The Seney National Wildlife Refuge was established in 1935. 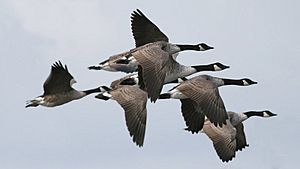 When the Seney National Wildlife Refuge was established in 1935, the Canada goose was a threatened species. Widespread, year-round hunting (legal and illegal) had reduced the North American population of free-flying Canada geese to a trickle of birds who avoided human beings as much as possible. One of the priorities of the new Seney NWR was to establish a refuge for free-flying Canada geese.

In January 1936, during the first winter of the Seney Refuge's operation, the refuge trucked in 300 pinioned Canada geese. These flightless geese were given a fenced-in pond area within the Refuge and were fed. It was hoped that they would produce a crop of goslings that would establish a migratory pattern of behavior and voluntarily return to the Refuge. The goslings were banded so that if they returned, the Refuge's small staff would know it.

Every year a shrinking crop of Canada goslings was hatched and flew south for the winter, but few or none returned in the following spring to Seney. Poaching was apparently continuing in the geese wintering grounds and on the flyways. Meanwhile, the parent population of wing-clipped Canada geese diminished between 1936 and 1945 from 300 to 45.

March, 1946 saw the first significant return of sixteen banded, free-flying Canada geese. This tiny flock bred true in the following years. The Seney Canada goose breeding population had multiplied to 3,000 birds by 1956, and continued to expand thereafter even after local hunting was re-legalized. The Seney National Wildlife Refuge's Canada goose project is considered to have been one of the key programs in re-establishing the Canada goose as a major wetland bird of North America.

As of 2007, the U.S. Fish and Wildlife Service, administrator of the Seney National Wildlife Refuge, was reporting that the refuge hosted approximately 88,000 visitors annually.

Seney NWR acts as the administrative unit for the following other refuges:

All content from Kiddle encyclopedia articles (including the article images and facts) can be freely used under Attribution-ShareAlike license, unless stated otherwise. Cite this article:
Seney National Wildlife Refuge Facts for Kids. Kiddle Encyclopedia.