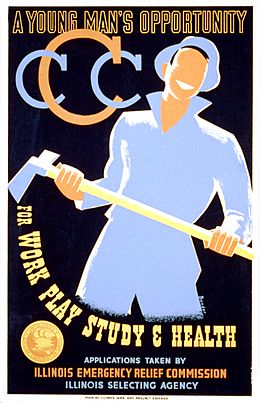 The Civilian Conservation Corps (CCC) was a public work relief program that operated from 1933 to 1942 in the United States for unemployed, unmarried men from relief families as part of the New Deal. Originally for young men ages 18–25, it was eventually expanded to young men ages 17–28.

The CCC was a major part of President Franklin D. Roosevelt's New Deal that provided unskilled manual labor jobs related to the conservation and development of natural resources in rural lands owned by federal, state and local governments. The CCC was designed to provide jobs for young men, and to relieve families who had difficulty finding jobs during the Great Depression in the United States.

Maximum enrollment at any one time was 300,000. Over the course of its nine years in operation, 3 million young men participated in the CCC, which provided them with shelter, clothing, and food, together with a small wage of $30 (about $547 in 2015) a month ($25 of which had to be sent home to their families). 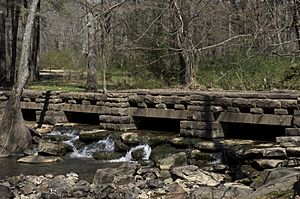 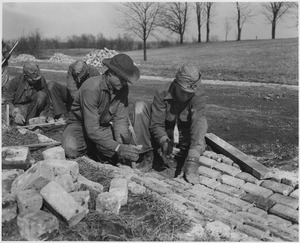 The American public made the CCC the most popular of all the New Deal programs. Sources written at the time claimed an individual's enrollment in the CCC led to improved physical condition, heightened morale, and increased employ-ability. The CCC also led to a greater public awareness and appreciation of the outdoors and the nation's natural resources, and the continued need for a carefully planned, comprehensive national program for the protection and development of natural resources.

During the time of the CCC, enrollees planted nearly 3 billion trees to help reforest America, constructed trails, lodges and related facilities in more than 800 parks nationwide and upgraded most state parks, updated forest fire fighting methods, and built a network of service buildings and public roadways in remote areas.

The CCC operated separate programs for veterans and Native Americans. Approximately 15,000 Native Americans participated in the program, helping them weather the Great Depression.

Despite its popular support, the CCC was never a permanent agency. It depended on emergency and temporary Congressional legislation and funding to operate. By 1942, with World War II and the draft in operation, the need for work relief declined, and Congress voted to close the program. 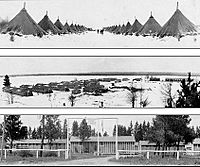 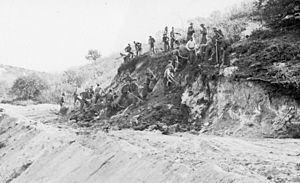 The CCC program was never officially terminated. Congress provided funding for closing the remaining camps in 1942 with the equipment being reallocated. It became a model for conservation programs that were implemented in the period after World War II. Present-day corps are national, state and local programs that engage primarily youth and young adults (ages 16–25) in community service, training and educational activities. The nation's approximate 113 corps programs operate in 41 states. During 2004, they enrolled more than 23,000 young people.

All content from Kiddle encyclopedia articles (including the article images and facts) can be freely used under Attribution-ShareAlike license, unless stated otherwise. Cite this article:
Civilian Conservation Corps Facts for Kids. Kiddle Encyclopedia.