Blairsville is a city and the county seat of Union County, on the northern border of Georgia, United States. It was founded near the Nottely River, which was dammed in 1942 as part of the Tennessee Valley Authority project, forming Lake Nottely. As of the 2010 census, the city had a population of 652. 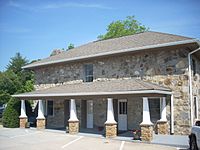 The town is named after Revolutionary War veteran James Blair.

Although the neighboring city of Dahlonega was known as the first site of gold in the United States, the Blairsville area was known to have the purest gold in the mountains. Assayers in Washington, D.C. could tell by looking that gold ore was from the Coosa Mines because it was “the yellowest gold” submitted and its brilliant color set it apart.

In the late 18th century the Collins family and the Dyer family settled in the area.

Many houses from the early 19th century still stand, or have been moved/or restored in another area of the county to help with preservation.

Blairsville's town square is home to the original courthouse, several local businesses, the Seasons Inn Motel, and a local old diner called the "Hole In The Wall".

Blairsville has a humid subtropical climate, yet due to its elevation of 1,883 feet (574 m), typically records far lower temperatures at night than what is encountered in much of the Southeastern U.S., and has slightly higher precipitation totals (56 inches or 1,420 millimetres annually) than most locations in the state; the average diurnal temperature variation exceeds 25 °F (14 °C) in each of the spring and autumn months. Snow usually occurs several times every year. The average annual snowfall is 4 inches. The monthly daily mean temperature ranges from 36.8 °F (2.7 °C) in January to 73.3 °F (22.9 °C) in July. There are 7.6 days of 90 °F (32 °C) highs and 4.6 days where the high fails to rise above freezing annually.

There were 226 households, out of which 23.0% had children under the age of 18 living with them, 27.4% were married couples living together, 15.5% had a female householder with no husband present, and 54.9% were non-families. 50.4% of all households were made up of individuals, and 22.1% had someone living alone who was 65 years of age or older. The average household size was 1.95 and the average family size was 2.92.

Nearby Lake Nottely is a TVA reservoir and a local recreational resource.

The Appalachian Trail in Georgia has elevations that vary from about 2500 to 4,500 feet (1,400 m) with many steep climbs and extends some 75 miles (121 km) through the Chattahoochee National Forest.

Encompassing nearly two-thirds of the county, the Chattahoochee National Forest has winding trails that lead visitors through scenic mountains, rushing rivers, and cascading waterfalls. This is where you can step back in time with nature and walk where the Cherokee Indians once lived. 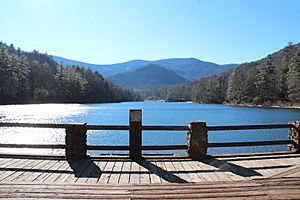 Brasstown Bald is the highest mountain peak in Georgia. It has a park with a picnic area and a small observation tower near the peak with a movie chronicling the change of seasons and the impact of pollution on the mountain. The peak may be reached by bus or by walking from a point halfway to the top, beyond which private vehicles are not allowed.

Vogel State Park is a park located on Highway 19/129 approximately eleven miles (18 km) south of Blairsville. It is centered around Lake Trahlyta.

The park has seasonal programs:

The public education system for Blairsville is supervised by the Union County School District, a relatively small school district, which manages the five schools in the system.

The Union County School District conducts classes for pre-school to grade twelve. Its facilities consist of two elementary schools, a middle school, and two high schools. The district has 172 full-time teachers and over 2,598 students.

Blairsville is home to one alternative school, the Mountain Education Center High School, which is an evening school.

There are some private schools nearby as well:

All content from Kiddle encyclopedia articles (including the article images and facts) can be freely used under Attribution-ShareAlike license, unless stated otherwise. Cite this article:
Blairsville, Georgia Facts for Kids. Kiddle Encyclopedia.