Murphy is a town in and the county seat of Cherokee County, North Carolina, United States. It is situated at the confluence of the Hiwassee and Valley rivers. It is the westernmost county seat in the state of North Carolina, approximately 360 miles (580 km) from the state capital in Raleigh. The population of Murphy was 1,627 at the 2010 census. 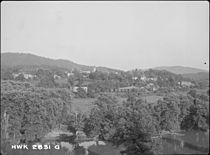 The site of Murphy, along the Hiwassee River, was known to the Cherokee as Tlanusi-yi (the Leech Place), because of a legend about a giant leech named Tlanusi that lived in the river there.

The Trading Path (later called the "Unicoi Turnpike") passed by the future site of Murphy, connecting the Cherokee lands east of the mountains with the "Overhill Towns" of Tennessee.

The town was first called by the name of "Huntington" in 1835 when the first post office, operated by Col. H.R.S. Hunter was established.

In 1836, during the Cherokee removal known as the Trail of Tears, the United States army built Fort Butler in what is today Murphy. Fort Butler acted as the main collection point for Cherokee east of the mountains. From Fort Butler the Cherokee were taken over the mountains on the Unicoi Turnpike to the main internment camps at Fort Cass (today Charleston, Tennessee). Today the Unicoi Turnpike is known as the Joe Brown Highway. The Cherokee County Historical Museum located in Murphy provides information about the Trail of Tears.

Cherokee County was formed in 1839 from a portion of Macon County, but Murphy wasn't incorporated as the county seat until 1851.

Murphy was once the terminus of the Murphy Branch rail line built in the late 19th century, although the branch has ended in Andrews since 1985. Murphy was the home of the once well-known crafts manufacturer Margaret Studios, which operated a nationwide chain of gift stores for its woodcraft products and housewares, such as lazy Susans and gift trays.

Folklorist John Jacob Niles based his well-known Christmas song "I Wonder as I Wander" on a phrase he heard in a song sung by the young daughter of a group of traveling evangelists in downtown Murphy on July 16, 1933.

Architect James Baldwin designed the Cherokee County Courthouse, located in downtown Murphy, in a Beaux-Arts style. Built in 1927, it is faced with locally sourced blue marble and is listed in the National Register of Historic Places along with the Robert Lafayette Cooper House and Harshaw Chapel and Cemetery.

There were 725 households, out of which 22.2% had children under the age of 18 living with them, 41.5% were married couples living together, 15.6% had a female householder with no husband present, and 39.3% were non-families. 36.4% of all households were made up of individuals, and 21.2% had someone living alone who was 65 years of age or older. The average household size was 2.13 and the average family size was 2.71.

Murphy sits just northwest of 19/74/64/129 which runs from just southwest of Murphy to Topton, just before US 129 breaks off. It is easily accessed by motor vehicle.

In-town and in-county transportation is available, for a small fee, via Cherokee County Transit. There are also private taxis for hire.

The town is located at the confluence of the Hiwassee River and Valley River.

Murphy is located in southwestern North Carolina, approximately halfway between Atlanta, Georgia and Knoxville, Tennessee. The location in the Blue Ridge Mountains has helped the community retain a fairly rural character, surrounded by wildlife such as bear, deer, fox and recently reintroduced elk.

Murphy has a humid subtropical climate, (Cfa) according to the Köppen classification, with hot, humid summers and cool to mild winters, with low temperatures significantly cooler than other parts of the Southeast, due in part to the elevation. Like the rest of the southeastern U.S., Murphy receives abundant rainfall, greatest in winter and enhanced by the elevation. Receiving as much as 100 inches per year in some parts, areas of Cherokee County are considered part of the Appalachian temperate rainforest. Blizzards are rare but possible; the 1993 Storm of the Century dropped 15 inches (38 cm) in 24 hours with more snowfall continuing up to 38" in some areas, causing widespread power outages and natural disasters.

Cities and populated areas within an approximate 15-mile (24 km) radius of Murphy:

The local public school system is run by Cherokee County Schools, which operates a total of 13 schools across the county:

The John C. Campbell Folkschool is located in Brasstown, NC an unincorporated village near Murphy. It exists partly in Cherokee County and partly in Clay County. This education center focuses on creative folk arts for all ages. The Folkschool also offers musical concerts and community dance entertainment.

Electricity for Western North Carolina is provided by Duke Energy, sometimes referred to as Duke Power. It has a total service territory covering 47,000 square miles (120,000 km2) Half of its power generation for the Carolinas comes from its nuclear power plants. Some of the power is supplied via solar panel farms located in the Murphy area. There are at least four solar farms, each with more than 4,000 panels. One of the farms, called Martins Creek Solar Project, alone provides "enough electricity to power more than 150 average-sized homes and enough revenue for the district to staff approximately two full-time teachers."

The town of Murphy's power is provided by Murphy Electric Power Board.

Industrial and personal waste is landfilled.

WKRK 1320 AM and WCNG 102.7 FM are two radio stations currently broadcast from Murphy.

There are 14.8 miles of roads maintained by the Town of Murphy, while other surroundings roads are maintained by the NC Department of Transportation. The Town receives about $56,000 per year in support of street maintenance. Of notable interest is a historic tee beam bridge located in downtown Murphy, NC, showcasing an early use of haunched, continuous cantilever bridge design.

Murphy and all of Cherokee County are served by Erlanger Western Carolina Hospital, certified by the United States Department of Health and Human Services. It is licensed for 191 beds, of which 120 are nursing home beds, 57 are general-use beds, and the remaining 14 are dedicated to Alzheimer's patients.

There are a variety of independent healthcare providers including the areas of general family practice, dental, OBGYN, ENT, sports medicine specialists, chiropractic, pediatrics, and holistic care.

Murphy and the surrounding unincorporated communities are protected by the Murphy Police Department, which is located at 93 Peachtree Street near downtown Murphy. It is headed by the Chief of Police, Justin J. Jacobs.

It is the mission of the Town of Murphy Police Department to increase the quality of life and create a safe environment for all citizens and visitors of the Town of Murphy. By forming a partnership with the community through Community Policing Initiatives we will work together to protect the lives and property of the citizens through fair, honest and professional enforcement of the laws, crime prevention and community problem solving.

All content from Kiddle encyclopedia articles (including the article images and facts) can be freely used under Attribution-ShareAlike license, unless stated otherwise. Cite this article:
Murphy, North Carolina Facts for Kids. Kiddle Encyclopedia.