Bitcoin (₿) is a digital and global money system cryptocurrency. It allows people to send or receive money across the internet, even to someone they don't know or don't trust. It is the first of its kind technology that allows the transfer of digital scarcity across the internet without needing a third party. Money can be exchanged without being linked to a real identity. The mathematical field of cryptography is the basis for Bitcoin's security.

Bitcoin was invented by someone using the name Satoshi Nakamoto. A Bitcoin address, or simply address, is an identifier of 26-35 letters and numbers, beginning with the number 1, 3, or bc1, that represents a possible destination for a bitcoin payment. Addresses can be generated at no cost by any user of Bitcoin. For example, using Bitcoin Core, one can click "New Address" and be assigned an address. It is also possible to get a Bitcoin address using an account at an exchange or online wallet service.

There are currently three address formats in common use:

Common P2PKH which begin with the number 1; e.g.: 1BvBMSEstWetqTFn5Au4m4GFg7xJaNVN2.

The preferred Bech32 type starting with bc1; e.g.: bc1quqq27xwxstclj9xqlv70k63xcy4xt8kslyvhq8.

The domain name "bitcoin.org" was registered on 18 August 2008. On 31 October 2008, a link to a paper authored by Satoshi Nakamoto titled Bitcoin: A Peer-to-Peer Electronic Cash System was posted to a cryptography mailing list.

In June 2021, El Salvador became the first country in the world to make Bitcoin a legal tender.

One of the differences between using bitcoin and using regular money online is that bitcoin can be used without having an internet connection to link any sort of real-world identity to it. Unless someone chooses to link their name to a bitcoin address, it is hard to tell who owns the address. Bitcoin does not keep track of users; it keeps track of addresses where the money is. Each address has two important pieces of cryptographic information, or keys: a public one and a private one.

A public key is what determines the ownership of bitcoins, and is very similar to an ID number. If someone wanted to send you bitcoins, all you would need to do is supply them your bitcoin address, which is a version of your public key that is easier to read and type. For example, if Bob has 1 bitcoin at the bitcoin address "ABC123," and Alice has no bitcoins at the bitcoin address "DEF456," Bob can send 0.5 bitcoins to "DEF456." As soon as the transaction is processed, Alice and Bob both have 0.5 bitcoins. Anyone using the system can see how much money "ABC123" has and how much money "DEF456" has, but they cannot tell anything about who owns the address.

In the example above, "ABC123" and "DEF456" are the bitcoin addresses of Bob and Alice. But Bob and Alice each have a second key which only they individually know. This is the private key, and it is the "other half" of a Bitcoin address. The private key is never shared, and allows the owner of the bitcoins to control them. However, if the private key is not kept secret, then anyone who sees it can also control and take the bitcoins there. This happened on live TV when Bloomberg's Matt Miller accidentally showed a private key to viewers. The money was taken immediately. The person who took it, told others about it later, saying "I'll send it back once Matt gives me a new address, since someone else can sweep [empty] out the old one."

Sites or users using the Bitcoin system are required to use a global database called blockchain. Blockchain is a record of all transactions that have taken place in the Bitcoin network. It also keeps track of new bitcoins as they are generated. With these two facts, the blockchain can keep track of who has how much money at all times.

To generate a bitcoin, a miner must solve a math problem. However, the difficulty of the math problem depends on how many people are mining for bitcoin at the moment. Because of how complicated the math problems usually are, they must be calculated with very powerful processors. Cynics of the technology highlight the environmental impact and sustainability of the creation process.

These processors can be found in CPUs, graphics cards, or specialized machines called ASICs. The process of generating the bitcoins is called mining. People who use these machines to mine bitcoins are called miners. Miners either compete with one another or work together in groups to solve a mathematical puzzle. The first miner or group of miners to solve the particular puzzle are rewarded with new bitcoins.

The puzzle is determined by the transactions being sent at the time and the previous puzzle solution. This means the solution to one puzzle is always different from the puzzles before. Attempting to change an earlier transaction, maybe to fake bitcoins being sent or change the number of someone's bitcoins, requires solving that puzzle again, which takes a lot of work, and also requires solving each of the following puzzles, which takes even more work. This means a bitcoin cheater needs to outpace all the other bitcoin miners to change the bitcoin history. This makes the bitcoin blockchain very safe to use.

A paper printable bitcoin wallet consisting of one bitcoin address for receiving and the corresponding private key for spending.

A popular image associated with Bitcoin is a QR code. QR codes are a group of black and white boxes that are similar to barcodes. Barcodes are a row of lines, and QR codes are a grid of squares. Bitcoin uses QR codes because they can store more information in a small space, and a camera such as a smartphone can read them. The two QR codes on the Bitcoin note are the public and private addresses, and can be scanned with a number of online tools. 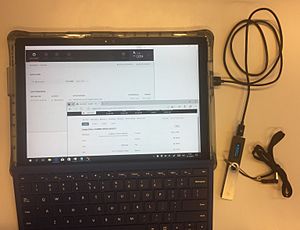 An actual bitcoin transaction from a web based cryptocurrency exchange to a hardware wallet.

Everyone in the Bitcoin network is considered a peer, and all addresses are created equal. All transactions can take place solely from peer to peer, but a number of sites exist to make these transactions simpler. These sites are called exchanges. Exchanges provide tools for dealing in Bitcoin. Some allow the purchase of Bitcoin from external accounts, and others allow trading with other cryptography-based currencies like Bitcoin. Most exchanges also provide a basic "wallet" service.

Wallets provide a handy way to keep track of all of a user's public and private addresses. Because addresses are pseudo-anonymous, anyone can have as many addresses as they want. This is useful for dealing with multiple people, but it can get complicated to manage multiple accounts. A wallet holds all of this information in a convenient place, just like a real wallet would. A backup of a wallet prevents 'losing' the bitcoins.

Bitcoin adoption and use continues to grow a lot every year. Since 2012, Bitcoin has gained the attention of the mainstream media; one way is the WannaCry ransomware created in May 2017. Adoption growth has not only happened for consumers, but also for many companies, who are looking to make use of all of the advantages of Bitcoin. Among Millennials, cryptocurrencies were a popular choice to invest $10,000 in, in a March 2018 survey of 1,000 Americans. Specifically, the survey found that 9.19% of Millennials (18-34) would invest the $10,000 in cryptocurrencies, compared to 4.04% of Generation Xers (35-54) and 3.08% of Baby Boomers (55+).

Bitcoin remains by far the most popular choice, followed by Ethereum and Litecoin. Specifically, 76% of the Millennials in the survey said that they would invest the $10,000 in Bitcoin, 12% in Ethereum and 12% in Litecoin. Although the real time price and trading in bitcoin varies with market demand.

As of 2021, El Salvador is the first country in the world to adopt the Bitcoin as a legal tender.

All content from Kiddle encyclopedia articles (including the article images and facts) can be freely used under Attribution-ShareAlike license, unless stated otherwise. Cite this article:
Bitcoin Facts for Kids. Kiddle Encyclopedia.