A Blockchain (or block chain) is a method of storing a list of entries, which cannot be changed easily after they are created. This also applies to the list. This is done by using several concepts from cryptography, including digital signatures and hash functions. In very basic terms, a blockchain combines the following two ideas: 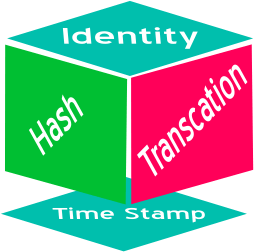 In most cases, a blockchain is managed by a peer-to-peer network. All peers use a common protocol that specifies how they should communicate with each other, how a new block is created and validated. Once recorded, the data in any given block cannot be changed easily any more. Changing the block means all the blocks after it need to be changed as well. Depending on the protocol, this will require a majority of the peers, or even all the peers, to agree.

Blockchains are secure by design. Blockchain technology is used where keeping a correct record is important. Use cases include medical records, identity management, food traceability, and voting.

Blockchain was invented by Stuart Haber and Scott Stornetta in 1991 as a means to assure the integrity of digital records. Haber and Stornetta launched the world's first commercial blockchain; Surety in 1995.

In 2008, Satoshi Nakamoto included as references 3 and 4 of Bitcoin: A Peer to Peer Electronic Cash System, the two papers by Haber and Stornetta to serve as the public transaction ledger of the cryptocurrency bitcoin. Because of its blockchain, bitcoin became the first digital currency to solve the double-spending problem without the need of a trusted authority or central server. The bitcoin design has inspired other applications.

All content from Kiddle encyclopedia articles (including the article images and facts) can be freely used under Attribution-ShareAlike license, unless stated otherwise. Cite this article:
Blockchain Facts for Kids. Kiddle Encyclopedia.