An algorithm is a step procedure to solve logical and mathematical problems.

A recipe is a good example of an algorithm because it says what must be done, step by step. It takes inputs (ingredients) and produces an output (the completed dish).

The words 'algorithm' and 'algorism' come from the name of a Persian mathematician called Al-Khwārizmī (Persian: خوارزمی, c. 780–850).

Informally, an algorithm can be called a "list of steps". Algorithms can be written in ordinary language, and that may be all a person needs.

In computing, an algorithm is a precise list of operations that could be done by a Turing machine. For the purpose of computing, algorithms are written in pseudocode, flow charts, or programming languages.

There is usually more than one way to solve a problem. There may be many different recipes to make a certain dish which looks different but ends up tasting the same when all is said and done. The same is true for algorithms. However, some of these ways will be better than others. If a recipe needs lots of complicated ingredients that you do not have, it is not as a good as a simple recipe. When we look at algorithms as a way of solving problems, often we want to know how long it would take a computer to solve the problem using a particular algorithm. When we write algorithms, we like our algorithm to take the least amount of time so that we can solve our problem as quickly as possible.

In cooking, some recipes are more difficult to do than others, because they take more time to finish or have more things to keep track of. It is the same for algorithms, and algorithms are better when they are easier for the computer to do. The thing that measures the difficulty of an algorithm is called complexity. When we ask how complex an algorithm is, often we want to know how long it will take a computer to solve the problem we want it to solve.

This is an example of an algorithm for sorting cards with colors on them into piles of the same color:

These are examples of algorithms for sorting a stack of cards with many different numbers, so that the numbers are in order.

Players start with a stack of cards that have not been sorted.

This algorithm goes through the stack of cards, one card at a time. This card is compared to the next card in the stack. Please note that this position only changes in step 6. This algorithm is called bubble sort. It is slow.

Animation that shows how a bubble sort works

Let us take a stack of the cards with the numbers "5 1 4 2 8", and sort it from smallest number to biggest one using this algorithm. In each step, the algorithm compares the elements written in bold. The top of the stack of cards is on the left-hand side.

This is an easy-to-understand algorithm for sorting. Computer scientists called it Bubble sort, because smaller elements will rise to the top, changing their position in each run. Unfortunately, the algorithm is not very good, because it needs a long time (many passes through the stack of cards) to sort it. 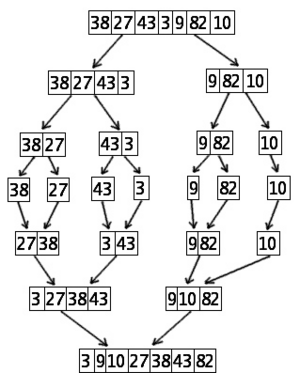 This algorithm uses another idea. Sometimes solving a problem is difficult, but the problem can be changed so it is made of simpler problems that are easier to solve. This is called recursion. It is more difficult to understand than the first example, but it will give a better algorithm.

This works with two stacks of cards. One of them is called A, the other is called B. There is a third stack that is empty at the start, called C. At the end, it will contain the result.

John von Neumann developed this algorithm in 1945. He did not call it Sorting by numbers, he called it Mergesort. It is a very good algorithm for sorting, compared to others.

The third algorithm for sorting cards. The element with the red bar is chosen as the pivot. At the start it is the element all to the right. This algorithm is called Quicksort.

The first algorithm takes much longer to sort the cards than the second, but it can be improved (made better). Looking at bubble sort, it can be noticed that cards with high numbers move from the top of the stack quite quickly, but cards with low numbers at the bottom of the stack take a long time to rise (move to the top). To improve the first algorithm here is the idea:

Rather than comparing two cards that are next to each other, at the start a 'special' card is picked. All the other cards are then compared to this card.

This algorithm was developed by C. A. R. Hoare in 1960. It is one of most widely used algorithms for sorting today. It is called Quicksort.

The sorting-by-numbers algorithms are more difficult to do than the sorting-by-colors algorithm, because they may have to do the steps again many times. One would say that sorting by numbers is more complex.

All content from Kiddle encyclopedia articles (including the article images and facts) can be freely used under Attribution-ShareAlike license, unless stated otherwise. Cite this article:
Algorithm Facts for Kids. Kiddle Encyclopedia.