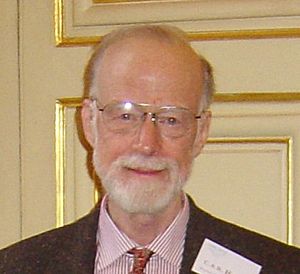 Tony Hoare at the 2005 VMCAI conference

Sir Charles Antony Richard Hoare (Tony Hoare or C. A. R. Hoare, born 11 January 1934) is an English computer scientist. He is probably best known for the development of Quicksort. Quicksort is the world's most widely used sorting algorithm. He also developed Hoare logic. Hoare received the Turing Award in 1980 "for his fundamental contributions to the definition and design of programming languages".

Hoare was born in Colombo, in Sri Lanka. He got his Bachelor's degree in Classics from the University of Oxford in 1956. He stayed in Oxford for one more year to study graduate-level statistics.

From 1956 to 1958, he served in the Royal Navy. He then studied computer translation of human languages at Moscow State University in the Soviet Union in the school of Andrey Nikolayevich Kolmogorov.

All content from Kiddle encyclopedia articles (including the article images and facts) can be freely used under Attribution-ShareAlike license, unless stated otherwise. Cite this article:
Tony Hoare Facts for Kids. Kiddle Encyclopedia.