Colombo (Sinhala: කොළඹ Kolamba, pronounced Tamil: கொழும்பு) is the commercial capital and largest city of Sri Lanka. According to the Brookings Institution, Colombo metropolitan area has a population of 5.6 million, and 752,993 in the city proper.

It is the financial centre of the island and a popular tourist destination. Colombo is a busy and vibrant place with a mixture of modern life and colonial buildings and ruins. It was the legislative capital of Sri Lanka until 1982.

Due to its large harbour and its strategic position along the East-West sea trade routes, Colombo was known to ancient traders 2,000 years ago. It was made the capital of the island when Sri Lanka was ceded to the British Empire in 1815, and its status as capital was retained when the nation became independent in 1948. In 1978, when administrative functions were moved to Sri Jayawardenepura Kotte, Colombo was designated as the commercial capital of Sri Lanka.

Although the British captured Colombo in 1796, it remained a British military outpost until the Kandyan Kingdom was ceded to them in 1815 and they made Colombo the capital of their newly created crown colony of British Ceylon. Unlike the Portuguese and Dutch before them, whose primary use of Colombo was as a military fort, the British began constructing houses and other civilian structures around the fort, giving rise to the current City of Colombo.

During the time they were in control of the Colombo, the British were responsible for much of the planning of the present city. In some parts of the city tram car tracks and granite flooring laid during the era are still visible today. 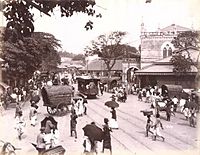 This era of colonialism ended peacefully in 1948 when Ceylon gained independence from Britain. Due to the tremendous impact this caused on the city's inhabitants and on the country as a whole, the changes that resulted at the end of the colonial period were drastic. An entire new culture took root. Changes in laws and customs, clothing styles, religions and proper names were a significant result of the colonial era. These cultural changes were followed by the strengthening of the island's economy.

Even today, the influence of the Portuguese, the Dutch and the British is clearly visible in Colombo's architecture, names, clothing, food, language and attitudes. Buildings from all three eras stand as reminders of the turbulent past of Colombo. The city and its people show an interesting mix of European clothing and lifestyles together with local customs.

The Beira Lake at night

Colombo's geography is a mix of land and water. The city has many canals and, in the heart of the city, the 65-hectare (160-acre) Beira Lake. The lake is one of the most distinctive landmarks of Colombo, and was used for centuries by colonists to defend the city. It remains a popular attraction, hosting regattas, and theatrical events on its shores. The Northern and North-Eastern border of the city of Colombo is formed by the Kelani River, which meets the sea in a part of the city known as the Modera (mōdara in Sinhala) which means river delta.

Galle Face Green is located in the heart of the city along the Indian Ocean coast, and is a popular destination for tourists and residents alike. The Galle Face Hotel is a historic landmark on the southern edge of this promenade.

Gangaramaya Temple is one of the most important temples in Colombo. The temple's architecture demonstrates an eclectic mix of Sri Lankan, Thai, Indian, and Chinese architecture.

The Viharamahadevi Park (formerly Victoria Park) is an urban park located next to the National Museum of Colombo and the Town Hall. It is the oldest and largest park in Colombo and features a large Buddha statue.

As part of the Urban Regeneration Program of the Government of Sri Lanka, many old sites and buildings were revamped to modern public recreational spaces and shopping precincts. These include Independence Memorial Hall Square, Pettah Floating Market and Old Dutch Hospital among others.

Colombo has most of the amenities that a modern city has. Compared to other parts of the country, Colombo has the highest degree of infrastructure. Electricity, water and transport to street lamps, phone booths, etc. have a considerably good standard. The majority of the major shopping malls in Sri Lanka are in the city, of which all are wi-fi enabled. Apart from that, many luxurious hotels, clubs and restaurants are in the city. In recent times there's been an outpour of high rise condominiums, mainly due to the very high land prices.

Colombo Harbour is the largest and one of the busiest ports in Sri Lanka. Colombo was established primarily as a port city during the colonial era, with an artificial harbour that has been expanded over the years. The Sri Lanka Navy maintains a naval base, SLNS Rangalla, within the harbour.

Education institutions in Colombo have a long history. Colombo has many of the prominent public schools in the country, some of them government-owned and others private. Most of the prominent schools in the city date back to the 1800's when they were established during the British colonial rule, such as the Royal College Colombo established in 1835. Certain urban schools of Sri Lanka have some religious alignment; this is partly due to the influence of British who established Christian missionary schools. The religious alignments do not affect the curriculum of the school except for the demographics of the student population. Colombo has many International Schools that have come up in the recent years. 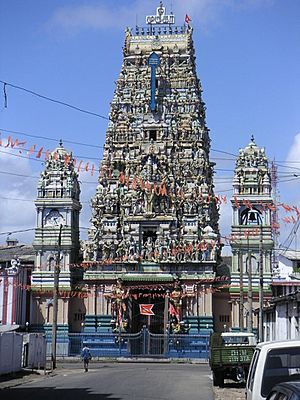 The Murugan Hindu temple in the Slave Island area

Colombo has wildly varying architecture that span centuries and depict many styles. Colonial buildings influenced by the Portuguese, Dutch and British exist alongside structures built in Buddhist, Hindu, Islamic, Indian and Contemporary architectural styles. No other place is this more evident in the Fort area. Here one may find new towering skyscrapers as well as historic buildings dating far back as the 1700s.

The Portuguese were the first colonists to settle in Colombo; establishing a small trading post, they had laid the foundations for a small fort which in time became the largest colonial fort in the island. The Dutch expanded the fort thus creating a well old fortified harbour. This came into the possession of the British in the late 1700s and by the late 19th century the seeing no threat to the Colombo Harbour, began demolishing the ramparts to make way for the development of the city. Although now there is nothing left of the fortifications, the area which was once the fort is still referred to as Fort.

There are none of the buildings of the Portuguese era and only a few from the Dutch period. These include the oldest building in the fort area, the former Dutch Hospital, the Dutch House which is now the Colombo Dutch Museum and several churches. The President's House (formerly the Queen's House) was originally the Dutch governor's house, and successive British governors made it their office and residence. However, it has undergone much change since the Dutch period. Adjoining the President's House are the Gordon Gardens, now off limits to the public.

Much of the old buildings of the fort area and in other parts of the city date back to the British times, these include governmental, commercial buildings and private houses.

Colombo's most beautiful festival is the celebration of Buddha's birth, enlightenment and death all falling on the same day. In Sinhala this is known as Vesak.

During this festival, much of the city is decorated with lanterns, lights and special displays of light (known as thoran). The festival falls in mid May and lasts a week. Many Sri Lankans visit the city to see the lantern competitions and decorations. During this week people distribute, rice, drinks and other food items for free in dunsal which means charity place. These dunsal are popular amongst visitors from the suburbs.

Since there is a large number of Muslims in Colombo. Eid Ul Fitr and Eid Ul Adha are two Islamic festivals that are celebrated in Colombo. Many businesses flourish during the eventual countdown for Eid Ul Fitr which is a major Islamic festival celebrated by Muslims after a month-long fasting. Colombo is generally very busy during the eve of the festivals as people do their last minute shopping.

Christmas is another major festival. Although Sri Lanka's Christians make up only just over 7% of the population, Christmas is one of the island's biggest festivals. Most streets and commercial buildings light up from the beginning of December and festive sales begin at all shopping centres and department stores. Caroling and nativity plays are frequent sights during the season.

The Sinhala and Hindu Aluth Awurudda' is a cultural event that takes place on 13 and 14 April. This is the celebration of the Sinhala and Hindu new year. The festivities include many events and traditions that display a great deal of Sri Lankan culture.

The National Museum of Colombo, established on 1 January 1877 during the tenure of the British Colonial Governor Sir William Henry Gregory, is in the Cinnamon Gardens area. The museum houses the crown jewels and throne of the last king of the kingdom of Kandy, Sri Vikrama Rajasinha.

There is also the Colombo Dutch Museum detailing the Dutch colonial history of the country. Colombo does not boast a very big art gallery. There is a small collection of random Sri Lankan paintings at the Art Gallery in Green Path; next to it is the Natural History Museum. 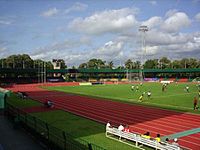 One of the most popular sports in Sri Lanka is cricket. The country emerged as champions of the 1996 Cricket World Cup and became runners up in 2007 and 2011. In the ICC World Twenty20 they became runners up in 2009 and 2012 and winners in 2014. The sport is played in parks, playgrounds, beaches and even in the streets. Colombo is the home for two of the country's most popular international cricket stadiums.

All content from Kiddle encyclopedia articles (including the article images and facts) can be freely used under Attribution-ShareAlike license, unless stated otherwise. Cite this article:
Colombo Facts for Kids. Kiddle Encyclopedia.