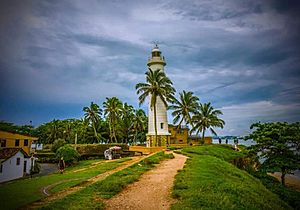 Galle (formerly Point de Galle) is a city on the southwest coast of Sri Lanka. It is also known as Galle Fort, the fortified old city founded by Portuguese colonists in the 16th century. Its stone sea walls were expanded by the Dutch. Its building designs shows Portuguese, Dutch and British influences. Some of the notable buildings include the 18th-century Dutch Reformed Church. Galle Lighthouse stands on the fort’s southeast tip. It is part of UNESCO World Heritage Sites.

All content from Kiddle encyclopedia articles (including the article images and facts) can be freely used under Attribution-ShareAlike license, unless stated otherwise. Cite this article:
Galle Facts for Kids. Kiddle Encyclopedia.