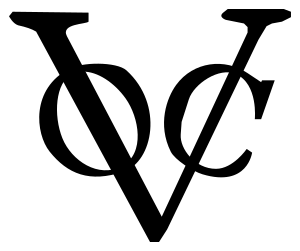 Logo of the VOC

The Dutch East India Company (Vereenigde Oost-Indische Compagnie or VOC in old Dutch), started in 1602, when the Netherlands gave a group of small trading companies a 21-year monopoly to trade in Asia. It was the first multinational corporation in the world and the first company to issue stock. The VOC had the power to start wars, make treaties, make its own money, and start new colonies.

It was an important company for almost 200 years until it became bankrupt in 1800. The VOC's colonies became the Dutch East Indies which later became Indonesia.

In the 16th century, trade with Asia was mostly controlled by Portugal. The Dutch government wished to take a foothold in the spice market, as Portugal could not keep up with the demand and rising prices in Europe. With government funding, the VOC set up its first trading post in what is now Jakarta, which eventually became its' main base of operations in the continent.

In 1620, the VOC created a trade agreement with their biggest rival in Asia, the English East India Company. This lasted until 1623, when the Amboyna Massacre forced the EEIC to move its trading posts from Indonesia to other areas in the continent.

In the 1620's, the VOC extended their reach to the remaining Indonesian Islands, and established plantations on the colonised islands to increase the volume of their exports. This expansion continued, until eventually the VOC was the richest company in the world.

In 1640, the VOC founded a trading post in Ceylon (Sri Lanka), the last place where the Portuguese had a foothold. The VOC now had a total monopoly over trade between Europe and Southern Asia.

Ships from the VOC were among the early explorers of Australia. The first Europeans to live in Australia were left behind after the mutiny on the VOC ship Batavia in 1629. Many of the sailors who took part in the mutiny were executed, but two, Wouter Loos, a soldier, and Jan Pelgrom de Bye, a cabin boy, were left at Wittecarra Gully, near the mouth of the Murchison River. They were never seen again.

All content from Kiddle encyclopedia articles (including the article images and facts) can be freely used under Attribution-ShareAlike license, unless stated otherwise. Cite this article:
Dutch East India Company Facts for Kids. Kiddle Encyclopedia.