Peter the Great facts for kids

Peter the Great (born in 1672, died in 1725) was a czar of Russia. He transformed Russia from an isolated kingdom into a transcontinental superpower. He became czar of Russia in 1682 and in 1697 he visited Western Europe and decided Russia must have access to the sea. He built the city and seaport of St. Petersburg which became the capital of Russia in 1711. He changed Russia's society, by making new laws so it would be modern like the European countries of the new Age of Enlightenment. Prince Alexander Danilovich Menshikov was a close friend of the emperor but was later disgraced due to embezzling national funds.

These are the wars that Russia fought in when Peter the Great was in charge:

Great Northern War: Russia was fighting Sweden during the Great Northern War. In 1700 Saxony, Denmark and Russia attacked Sweden. Sweden invaded Russia in 1709 which was not a good idea. The Russian Army retreated so the Swedish Army had to chase them. When a very cold winter came, half of the Swedish soldiers died in the cold. Eventually the Swedish army caught up to the Russian army and they had a battle, called the battle of Poltava. Russia won the battle but most of the Swedish soldiers, including their king, Charles XII of Sweden escaped and went to the Ottoman Empire. Peter didn't like this so he declared war on the Ottoman Empire but he lost and had to give the town of Azov back to the Ottomans.

After that Russia invaded Sweden and conquered Estonia, Livonia, and Finland. By 1719 Russia had conquered all of Sweden. Even though Sweden had clearly lost, they did not give up until 1721. In 1721 Sweden signed the Treaty of Nystad where they agreed to give Estonia, Livonia and Ingria to Russia.

Because Russia was a major power after the war, Peter the Great changed its name from the Tsardom of Russia to the Russian Empire.

Russo-Persian War: At the start of the war Persia was already in chaos and was about to collapse. Peter the Great took advantage of this and invaded Persia. The war went from 1722 to 1723. In the end, Russia won and gained lots of land from Persia but had lost a lot of men from fighting. After Peter died, his heirs struggled for power and all the lands that Russia had conquered were given back to Persia. 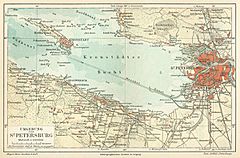 An old map of St. Petersburg and Kronstadt, the cities built by Peter 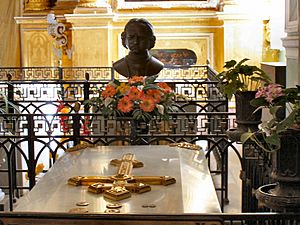 Tomb of Peter the Great in Peter and Paul Fortress

Peter has been featured in many books, plays, films, and games, including the poems The Bronze Horseman, Poltava and the unfinished novel The Moor of Peter the Great, all by Alexander Pushkin. The former dealt with The Bronze Horseman, an equestrian statue raised in Peter's honour. Aleksey Nikolayevich Tolstoy wrote a biographical historical novel about him, named Pëtr I, in the 1930s.

All content from Kiddle encyclopedia articles (including the article images and facts) can be freely used under Attribution-ShareAlike license, unless stated otherwise. Cite this article:
Peter the Great Facts for Kids. Kiddle Encyclopedia.