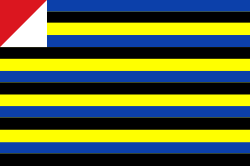 Zaandam is a city in the west of the Netherlands, in the province of North Holland. It has about 74,000 inhabitants (2014). It makes part of the municipality of Zaanstad.

First settlements in the region were known up from the 11th century.

All content from Kiddle encyclopedia articles (including the article images and facts) can be freely used under Attribution-ShareAlike license, unless stated otherwise. Cite this article:
Zaandam Facts for Kids. Kiddle Encyclopedia.