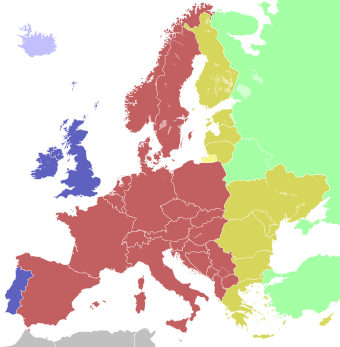 Central European Time is a time zone. It is one hour ahead of Coordinated Universal Time (what used to be called Greenwich Mean Time). Most countries in the central part of Europe and some countries in Africa follow it.

In Europe, the countries of Ireland, Great Britain, Iceland and Portugal use Western European Time. All the other countries, up to Norway, Poland, Slovakia, Hungary, Bosnia and Herzegovina, Serbia and North Macedonia use Central European Time.

Algeria and Tunisia in Africa use CET but do not observe daylight saving time.

All content from Kiddle encyclopedia articles (including the article images and facts) can be freely used under Attribution-ShareAlike license, unless stated otherwise. Cite this article:
Central European Time Facts for Kids. Kiddle Encyclopedia.