Slovakia (Slovak: Slovensko) (Official name The Slovak Republic, Slovenská republika) is a country with no access to the ocean in Central Europe. It is bordered by Austria in the southwest, Hungary in the south, Ukraine in the east, Poland in the north and Czech Republic in the northwest. Its capital city is Bratislava, the only capital of the world that borders with other two countries. Other main cities are Košice, Banská Bystrica, Žilina, Trenčín, Nitra, Prešov, Bardejov and Trnava. Slovakia is a member of the European Union since 2004 and its official currency is the Euro. 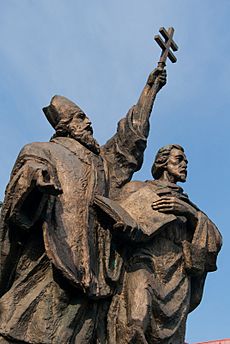 A statue of Saint Cyril and Saint Methodius in Žilina. In 863, they introduced Christianity to what is now Slovakia.

The Celts started to settle since 450 BC. The coins named Biatec represent the first use of writing in Slovakia. At the turn of millenniums, various Germanic tribes like Quadi and Marcomanni started to overtake the area. The Roman Empire established a series of outposts along the Danube river. They even fought Germanic tribes, with the most northern presence being in Trenčín (Laugaritio), during the Marcomannic Wars.

The Great Moravia was at first in constant quarrels with the Eastern Francia, and at the beginning of the 10th century, with the Magyars who arrived from Asia. The Magyars beat the Great Moravia in 906, overtook the area and established the Hungarian Principality, resulting later in the creation of the Kingdom of Hungary in year 1000. Slovak settlements continued to be in the north, while those of the Hungarians were in the south.

A huge population loss resulted from the Mongol invasions in 1241. The Hungarian kings started to invite other settlers, for example Germans in the 13th century, and many others started to arrive in the kingdom, Vlachs from Romania in the 14th century and Jews.

The expansion of the Ottoman Empire in the 16th century from the south, who occupied the two most important towns in the kingdom, Buda (capital) and Szekesfehérvár (coronation capital) and southern regions, the center shifted to Slovakia and the capitals moved to Bratislava (Pressburg, Pozsony at that time). The fights against the Ottomans and an uprising against the Habsburgs caused a lot of destruction. After the Ottomans started to retreat back from Hungary Bratislava continued to be capital until 1848, when it was moved back to Budapest.

The creation of the dual monarchy Austria-Hungary gave free hand to the Magyars, and Slovaks until 1918 were under cultural repressions from the Hungarian government, limiting the Slovak language, and promoting its Magyarisation policy.

The area was a part of Czechoslovakia from 1918 to 1992. Czechoslovakia became independent from the Austrian-Hungarian Empire in 1918. The first Czechoslovakian president was Tomáš Garrigue Masaryk. Czechoslovakia split for the first time in 1938/1939, when Slovakia, with Hitler's help, became independent, though all the time until 1945, the end of the World War II was puppet ally of the Nazi Germany. Czechoslovakia was once again created in 1945, where the Communists took rule in 1948 and ruled until 1989, when the series of events, called Velvet Revolution overthrown them. Soviet inspired Czechoslovakia peacefully split into two countries (Slovakia and Czech Republic) on January 1 1993, in what became known as the Velvet Divorce. Slovakia has been a member of the European Union since May 1, 2004.

Panorama of the High Tatras

Slovakia lies between latitudes 47° and 50° N, and longitudes 16° and 23° E. The Slovak landscape is noted primarily for its mountainous nature, with the Carpathian Mountains extending across most of the northern half of the country. Among these mountain ranges are the high peaks of the Fatra-Tatra Area (including Tatra Mountains, Greater Fatra and Lesser Fatra), Slovak Ore Mountains, Slovak Central Mountains or Beskids. The largest lowland is the fertile Danubian Lowland in the southwest, followed by the Eastern Slovak Lowland in the southeast. Forests cover 41% of Slovak land surface. 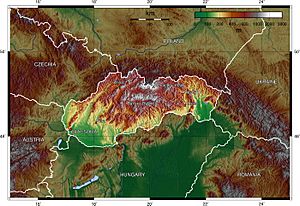 A topographical map of Slovakia

The Tatra Mountains, with 29 peaks higher than 2,500 metres (8,202 feet) AMSL, are the highest mountain range in the Carpathian Mountains. The Tatras occupy an area of 750 square kilometres (290 sq mi), of which the greater part 600 square kilometres (232 sq mi) lies in Slovakia. They are divided into several parts.

To the north, close to the Polish border, are the High Tatras which are a popular hiking and skiing destination and home to many scenic lakes and valleys as well as the highest point in Slovakia, the Gerlachovský štít at 2,655 metres (8,711 ft) and the country's highly symbolic mountain Kriváň. To the west are the Western Tatras with their highest peak of Bystrá at 2,248 metres (7,375 ft) and to the east are the Belianske Tatras, smallest by area.

Separated from the Tatras proper by the valley of the Váh river are the Low Tatras, with their highest peak of Ďumbier at 2,043 metres (6,703 ft).

The Tatra mountain range is represented as one of the three hills on the coat of arms of Slovakia. 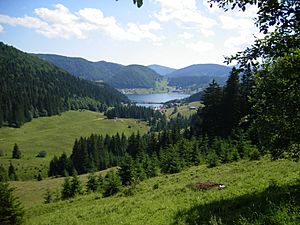 There are 9 national parks in Slovakia, covering 6.5% of Slovak land surface. 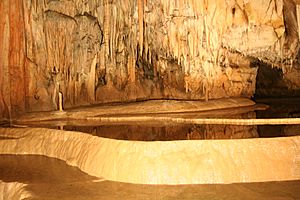 Slovakia has hundreds of caves and caverns under its mountains, of which 30 are open to the public. Most of the caves have stalagmites rising from the ground and stalactites hanging from above. There are currently five Slovak caves under UNESCO's World Heritage Site status. They are Dobšinská Ice Cave, Domica, Gombasek Cave, Jasovská Cave and Ochtinská Aragonite Cave. Other caves open to the public include Belianska Cave, Demänovská Cave of Liberty, Demänovská Ice Cave or Bystrianska Cave. 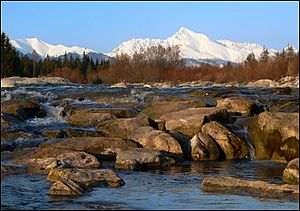 Winter in Banská Štiavnica; the town is a UNESCO World Heritage Site.

The Slovak climate lies between the temperate and continental climate zones with relatively warm summers and cold, cloudy and humid winters. Temperature extremes are between −41 to 40.3 °C (−41.8 to 104.5 °F) although temperatures below −30 °C (−22 °F) are rare. The weather differs from the mountainous north to the plains in the south.

In Slovakia, there are four seasons, each season (Spring, Summer, Autumn and Winter) lasts three months. The dry continental air brings in the summer heat and winter frosts. In contrast, oceanic air brings rainfalls and reduces summer temperatures. In the lowlands and valleys there is often fog, especially in winter.

Summer starts on 22 June and is usually characterised by hot weather with daily temperatures exceeding 30 °C (86 °F). July is the warmest month with temperatures up to about 37 to 40 °C (99 to 104 °F), especially in regions of southern Slovakia – in the urban area of Komárno, Hurbanovo or Štúrovo. Showers or thunderstorms may occur because of the summer monsoon called Medardova kvapka (Medard drop – 40 days of rain). Summer in Northern Slovakia is usually mild with temperatures around 25 °C (77 °F) (less in the mountains).

Autumn in Slovakia starts on 23 September and is mostly characterised by wet weather and wind, although the first weeks can be very warm and sunny. The average temperature in September is around 14 °C (57 °F), in November to 3 °C (37 °F). Late September and early October is a dry and sunny time of year (so-called Indian Summer).

Winter starts on 21 December with temperatures around −5 to −10 °C (23 to 14 °F). In December and January it is usually snowing, these are the coldest months of the year. At lower altitudes, snow does not stay the whole winter, it changes into the thaw and frost. Winters are colder in the mountains, where the snow usually lasts until March or April and the night temperatures fall to −20 °C (−4 °F) and colder. 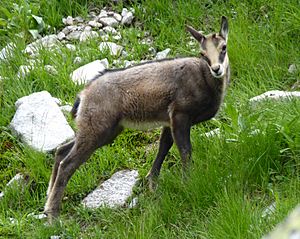 The biodiversity of Slovakia comprises animals (such as annellids, arthropods, molluscs, nematodes and vertebrates), fungi (Ascomycota, Basidiomycota, Chytridiomycota, Glomeromycota and Zygomycota), micro-organisms (including Mycetozoa), and plants. The geographical position of Slovakia determines the richness of the diversity of fauna and flora. More than 11,000 plant species have been described throughout its territory, nearly 29,000 animal species and over 1000 species of protozoa. Endemic biodiversity is also common.

Slovakia is located in the biome of temperate broadleaf and mixed forests. As the altitude changes, the vegetation associations and animal communities are forming height levels (oak, beech, spruce, scrub pine, alpine meadows and subsoil). Forests cover 44% of the territory of Slovakia. In terms of forest stands, 60% are broadleaf trees and 40% are coniferous trees. The occurrence of animal species is strongly connected to the appropriate types of plant associations and biotopes.

Over 4000 species of fungi have been recorded from Slovakia. Of these, nearly 1500 are lichen-forming species. Some of these fungi are undoubtedly endemic, but not enough is known to say how many. Of the lichen-forming species, about 40% have been classified as threatened in some way. About 7% are apparently extinct, 9% endangered, 17% vulnerable, and 7% rare. The conservation status of non-lichen-forming fungi in Slovakia is not well documented, but there is a red list for its larger fungi. 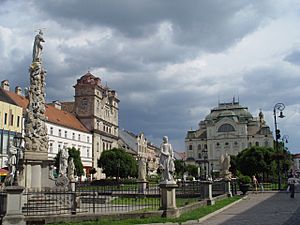 About 5.5 million people live in Slovakia. Most people are Slovak (86%), but in southern regions of Slovakia live Hungarians (10%), with some municipalities even being with the Hungarian majority (for example, Komárno or Dunajská Streda), Ruthenian or Ukrainian are spoken in the northeast. A minority Roma population speak versions of the Romany language and are scattered mainly in the east.

The Slovak constitution guarantees a freedom of religion. The majority of Slovaks are Roman Catholics (69%), the next are the atheists (13%). Other religions include Lutheranism, Greek Orthodox and Calvinism. There are about 5,000 Muslims in Slovakia and 2,000 Jews. 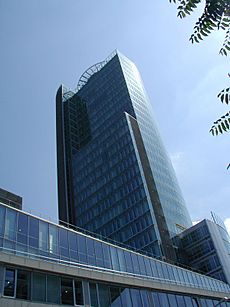 National Bank of Slovakia in Bratislava

The Slovak economy is one of the fastest growing economies in Europe and 3rd fastest in eurozone (2017). 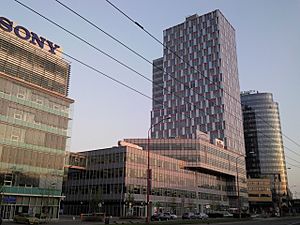 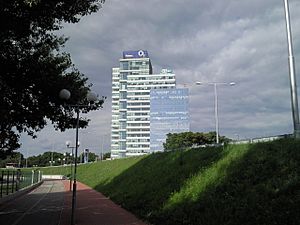 From electrical engineering companies, Foxconn has a factory at Nitra for LCD TV manufacturing, Samsung at Galanta for computer monitors and television sets manufacturing. Slovnaft based in Bratislava with 4,000 employees, is an oil refinery with a processing capacity of 5.5 - 6 million tonnes of crude oil, annually. Steel producer U. S. Steel in Košice is the largest employer at the east of Slovakia with 12,000 employees. 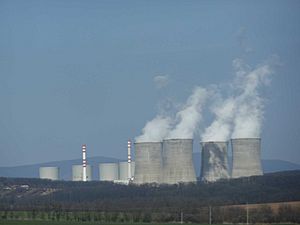 In 2012, Slovakia produced a total of 28,393 GWh of electricity while at the same time consumed 28 786 GWh. The slightly higher level of consumption than the capacity of production (- 393 GWh) meant the country was not self-sufficient in energy sourcing. Slovakia imported electricity mainly from the Czech Republic (9 961 GWh – 73.6% of total import) and exported mainly to Hungary (10 231 GWh – 78.2% of total export).

Nuclear energy accounts for 53.8% of total electricity production in Slovakia, followed by 18.1% of thermal power energy, 15.1% by hydro power energy, 2% by solar energy, 9.6% by other sources and the rest 1.4% is imported.

A tram in the northern town of Vysoké Tatry

There are currently 8 regions of Slovakia:

These are further divided into many districts. There are currently 79 districts of Slovakia.

All content from Kiddle encyclopedia articles (including the article images and facts) can be freely used under Attribution-ShareAlike license, unless stated otherwise. Cite this article:
Slovakia Facts for Kids. Kiddle Encyclopedia.