Volkswagen is a car company from Germany. The word volkswagen means "People's car" in German. Its headquarters are in Wolfsburg, Lower Saxony. It was started in the 1930s, at the request of the country's leader, Adolf Hitler, to produce a car designed by Ferdinand Porsche.

In the 1930s Adolf Hitler was looking for someone who could make a cheap car that the common German worker could afford. At the same time, Ferdinand Porsche had been working for years on a cheap car that could hold a family and would drive like a real car, not a micro car. He had already designed and built small cars with rear engines and shaped like a beetle (for better aerodynamics). At this time, owning a car in Germany was something only for the rich people, and most car companies were not interested in making a low-cost car. Porsche's company, also called Porsche, only made designs for others at that time. So Porsche could not find anyone to make the small car that he wanted.

Though Hitler never learned to drive, he was very interested in cars (he also created the autobahn, which led to the U.S. interstate highways). Hitler wanted the car to hold four people. It was to be cooled by oil instead of water. The car needed to be able to travel at least 100 km/h, or about 60 mph, and use no more than 7 liters of gasoline for 100 kilometers (about 34 mpg). The car companies in Germany at the time didn't want to make this new low-cost car, so Hitler formed a new company, run by the government. The first name given to the car was "KdF-Wagen." "KdF" stood for Kraft durch Freude, or "Strength through Joy." Some were made, but by the time the factory was finished in 1938, World War II started. The factory then built jeep-like cars for the German military instead. 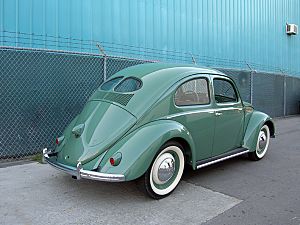 After the war, people from the United Kingdom and the United States reopened the factory and started making cars again. The factory was in ruins from the war and could only make a few cars at a time. The British military were in charge of this section of Germany. At first they tried to find another car company to rebuild the factory. Henry Ford was offered the company for free. After looking it over, his adviser said "Mr. Ford, what we are being offered here is not worth a damn!" So the Volkswagen company went ahead by itself to make the car. The man who led the Volkswagen company during this time was Heinz Nordhoff.

At first they only made one type of car, the Volkswagen Beetle. (It was simply called the Type 1 Sedan by the company, it also had the nickname "Bug" in the U.S. and other nicknames elsewhere). In 1950, the Type 2 (the bus) was introduced, also built with an engine in the back of the vehicle. The cars became popular and well-known all over the world. The Beetle later became one of the best selling cars in history. It was built for many years afterward in factories in Germany, Brazil and Mexico.

The last original Volkswagen Beetle to be built was built in Mexico. It was built in July of 2003. Volkswagen has a new car called the "New Beetle." which began selling in 1997, It looks like the old car, but is built quite differently. It is faster, safer, and has an engine in the front, not the back, and is water-cooled (using a radiator). It is much more suited to today's modern world in terms of design and security.

Volkswagen is currently involved in an emissions test scandal.

Some of Volkswagen's popular cars are the Golf, Jetta, Polo,Beetle and the Passat. VW's as they are commonly known, have also entered the off road segment with cars like the Touarag, and the commercial segment with the Touran. This year sees VW's 21st anniversary since the Golf 1 went on sale in the 1980s. Since its birth VW has sold over 315,000 units of the Golf 1 alone. 2006 saw the entry of the fifth generation of the Golf. The flagbearer - the GTI - is powered by a 147Kw 2.0l 4 cylinder turbo charged engine,with VW DSG and FSI technology. The Golf GTI has evolved a long way since the 80's but the fifth generation GTI is criticised by some as it does not live up to the expectations and standards set by the legendary Mk1 GTI, which was fitted with an 1600, 8 valve motor.

The water-cooled line was started in 1974.

All content from Kiddle encyclopedia articles (including the article images and facts) can be freely used under Attribution-ShareAlike license, unless stated otherwise. Cite this article:
Volkswagen Facts for Kids. Kiddle Encyclopedia.