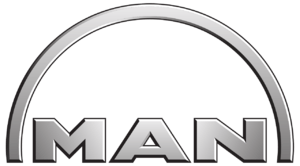 MAN SE is a German mechanical engineering company and parent company of the MAN Group. It is a subsidiary of automaker Volkswagen. MAN SE is based in Munich. Its primary output is for the automotive industry, particularly heavy trucks. Further activities include the production of diesel engines for various applications, including boats. The company also builds turbomachinery.

In the 1950s, the North British Locomotive Company of Scotland held a licence to build diesel engines of MAN design. These engines were used in some British Railways diesel locomotives, such as the Class 21.

All content from Kiddle encyclopedia articles (including the article images and facts) can be freely used under Attribution-ShareAlike license, unless stated otherwise. Cite this article:
MAN SE Facts for Kids. Kiddle Encyclopedia.