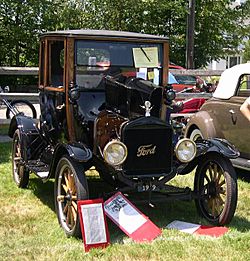 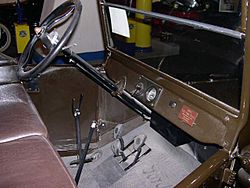 Inside of 1923 Model T. Other years are similar.

The Ford Model T was an American car built between 1908 and 1928 by the Ford Motor Company of Detroit, Michigan. It is one of the most important cars in history because it was one of the first cars to be sold for very little money, making it easy for people to travel from place to place.

Why the Model T was so important

Before the Model T, most cars cost lots of money. Only rich people could afford them. Even Ford's cars before the Model T cost a lot of money. The Model T went for around $980. A car built in 1903 called the Oldsmobile Curved Dash was very easy to buy, but was a very simple and slow car that was more like a carriage than a car. 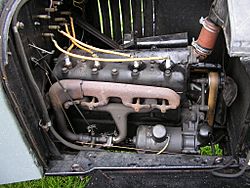 The man who owned the company, Henry Ford, heard about meat being cut on a disassembly line, which moved meat from worker to worker so that the meat could be cut up. No one had ever thought to use an assembly line to put cars together. Ford knew that if he built his cars on an assembly line instead of one at a time like other cars, he could make a car that anyone could afford and would be built like cars that cost more money. He also knew that he could pay his workers more money.

The Ford Model T car was designed by Henry Ford, Childe Harolde Wills, and two Hungarian men named József Galamb and Eugene Farkas. The Model T had a 177-cubic-inch (2.9-L) four-cylinder engine producing 20 horsepower (15 kW) for a top speed of 45 miles per hour (72 km/h). The engine had side valves and three main bearings. Fuel economy was 14 to 21 miles per gallon (6 to 9 km/l), an excellent number even today.

The beginning of the Model T

Ford began building the Model T in his Piquette factory on October 6, 1908 as a 1909 model. Workers from all over the world wanted to work for Ford because of the good pay. Workers could even save their money for a Model T of their own. The price of the Model T dropped over the years, making it even easier to buy.

Model T's started out in four different colors, but due to the drying process of the black paing Ford went back to black as it was fast enough for the assembly process in 1914. As car paint improved over the years, Ford began offering other colors. The time it took a chassis to become a finished car was over 12 hours when the first Model Ts were built. By the time the last Model T came off of the line, Ford had so many auto plants, it was making one car every 27 seconds! The Model T's started out costing $850.00 and went down to $260.00 in the last year of production.

Even though the Model T sold for little money, Ford used the best materials he could buy to make his car. Most roads in the Model T's day were dirt, gravel, or even mud. That meant the Model T had to be very strong, and it was. The wheels and tires were very tall and skinny so that they could sink into mud roads and not get stuck. It was also very simple.

How to drive a Model T

Ford made the Model T easy to drive compared to today's cars since the people to whom he sold his cars did not know how to drive anything other than a horse. It is not like driving a modern car, though three pedals are on the floor like a modern manual transmission car. A Model T has a steering wheel that works the same way as in cars of today, but almost everything else is different.

The first Model Ts did not even have a starter like a modern car. This is the powerful electric motor in a car that turns the engine to make it run when it is turned off. The engine on the Model T was started with a hand crank on the front of the car. A wire loop near the radiator worked the choke on the carburetor to give the engine extra fuel to help start it when it was cold. This could be dangerous if a person were not careful. If the levers that controlled the engine were not set the right way, especially the spark control, the engine could backfire, or spin the wrong way. Many people got broken arms this way. Doctors even had a special name for this kind of break: the "Ford fracture". Many Model T owners added electric starters to their cars and it was not long before Ford started doing the same. A Model T is in high gear by default, so if the parking/clutch lever was not engaged, the car had a tendency to run over the operator when started.

To make a modern car go or accelerate once the engine is running, a person steps on a pedal on the floor to engage the transmission into low gear. To make a Model T accelerate, move two levers near the steering wheel. The lever on the right was the throttle (or engine speed), and the lever on the left adjusted the time that the spark plugs fired. These levers needed to be set properly before the engine could be started.

The three pedals on the floor of the Model T were for the brake on the right, reverse in the middle to make the Model T go backwards, and a pedal on the left to shift the gears from low to high speed. A lever on the floor worked the brakes as well as the clutch. Pulling the lever toward the driver would set the parking brake and help keep the car from moving while parked. When the lever was placed in the middle, the transmission would be in neutral.

Once the engine is running, the driver now has to make the Model T move on its own. Step on the pedal all the way to the left, move the throttle lever to "give it the gas" and gently move the floor lever forward. This is low gear, the powerful gear used to get the Model T moving. Once it is moving, move the right lever up, let the left pedal come all the way up, and give it more gas to shift into high. To make the car go faster still, move the throttle lever as well as the spark advance lever. Stepping on the left pedal only halfway puts the car in neutral, the same as the lever. This helps the Model T come to a stop without causing the engine to stop as well.

The brakes on a Model T work the rear wheels by the use of brake bands inside the transmission. Modern cars have brakes on all four wheels. No brakes are on the front of a Model T.

More than fifteen million (15,000,000) Model T cars were built. That record was not broken until 1971 by the Volkswagen. Today, the record for the most cars built is held by the Toyota Corolla.

The Model T was nicknamed the "Tin Lizzie" and "Flivver" by the people who drove it. A new car took the place of the Model T in 1928, the Ford Model A.

All content from Kiddle encyclopedia articles (including the article images and facts) can be freely used under Attribution-ShareAlike license, unless stated otherwise. Cite this article:
Ford Model T Facts for Kids. Kiddle Encyclopedia.