A lever is a simple machine. It is something that can be used in a lot of ways. One way is by measuring things, or by seeing which weighs more. A lever is supported by a fulcrum which it uses to lifts weights. It is one of six simple machines. There are three types of levers: first-class, second-class and third-class.

The earliest remaining writings about levers are from the 3rd century BC. They were written by Archimedes. "Give me a place to stand, and I shall move the earth." is a famous quote from Archimedes who stated the correct mathematical principle of levers (quoted by Pappus of Alexandria).

There are three kinds of levers. The difference between them is where the fulcrum is and where the forces are. 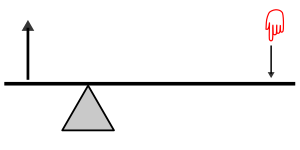 A first-class lever is a lever where the fulcrum is in between the effort and resistance (the load). Seesaws and crowbars are examples of first class levers.

A second-class lever is where the resistance is between the effort and the fulcrum. Wheel barrows and wrenches are examples of second class levers.

All content from Kiddle encyclopedia articles (including the article images and facts) can be freely used under Attribution-ShareAlike license, unless stated otherwise. Cite this article:
Lever Facts for Kids. Kiddle Encyclopedia.