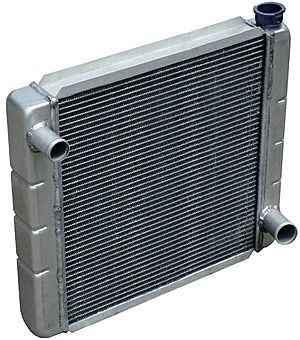 Most cars use a radiator to cool the engine. To produce power, engines must burn a fuel. This creates a lot of heat. If the heat is not removed, the engine will overheat and stop running. The radiator is connected to the engine with hoses.

A liquid flows into the engine. Heat is moved from the engine to the liquid. The heat moves because of Newton's Law of Cooling. This law says that heat will move from something hot to something cooler. 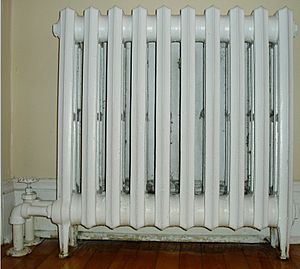 A steam radiator used to heat a house

All content from Kiddle encyclopedia articles (including the article images and facts) can be freely used under Attribution-ShareAlike license, unless stated otherwise. Cite this article:
Radiator Facts for Kids. Kiddle Encyclopedia.