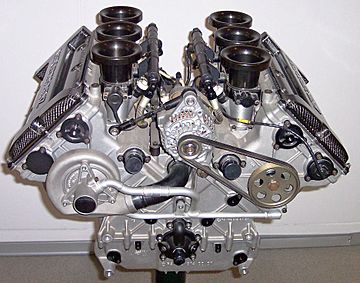 A V6 internal combustion engine from a Mercedes-Benz

An engine, or motor, is a machine used to change energy into movement that can be used. The energy can be in any form. Common forms of energy used in engines are electricity, chemical (such as petrol or diesel) or heat. When a chemical is used to produce energy it is known as fuel.

"Engine" was originally a term for any mechanical device that converts force into motion. Hence, pre-industrial weapons such as catapults, trebuchets and battering rams were called "siege engines". The word "gin," as in "cotton gin", is short for "engine." The word derives from Old French engin, from the Latin ingenium, which is also the root of the word ingenious. Most mechanical devices invented during the industrial revolution were described as engines—the steam engine being a notable example.

In modern usage, the term engine is typically restricted to heat engines, like steam engines and internal combustion engines, that burn or otherwise consume fuel to perform mechanical work by exerting a torque or linear force (usually in the form of thrust). Examples of engines which exert a torque include the familiar automobile gasoline and diesel engines, as well as turboshafts. Examples of engines which produce thrust include turbofans and rockets.

Simple machines, such as the club and oar (examples of the lever), are prehistoric. More complex engines using human power, animal power, water power, wind power and even steam power date back to antiquity. Human power was focused by the use of simple engines, such as the capstan, windlass or treadmill, and with ropes, pulleys, and block and tackle arrangements; this power was transmitted usually with the forces multiplied and the speed reduced. These were used in cranes and aboard ships in Ancient Greece, as well as in mines, water pumps and siege engines in Ancient Rome. The writers of those times, including Vitruvius, Frontinus and Pliny the Elder, treat these engines as commonplace, so their invention may be more ancient. By the 1st century AD, cattle and horses were used in mills, driving machines similar to those powered by humans in earlier times.

According to Strabo, a water powered mill was built in Kaberia of the kingdom of Mithridates during the 1st century BC. Use of water wheels in mills spread throughout the Roman Empire over the next few centuries. Some were quite complex, with aqueducts, dams, and sluices to maintain and channel the water, along with systems of gears, or toothed-wheels made of wood and metal to regulate the speed of rotation. More sophisticated small devices, such as the Antikythera Mechanism used complex trains of gears and dials to act as calendars or predict astronomical events. In a poem by Ausonius in the 4th century AD, he mentions a stone-cutting saw powered by water. Hero of Alexandria is credited with many such wind and steam powered machines in the 1st century AD, including the Aeolipile and the vending machine, often these machines were associated with worship, such as animated altars and automated temple doors.

In 1206, al-Jazari employed a crank-conrod system for two of his water-raising machines. A rudimentary steam turbine device was described by Taqi al-Din in 1551 and by Giovanni Branca in 1629.

In the 13th century, the solid rocket motor was invented in China. Driven by gunpowder, this, the simplest form of internal combustion engine was unable to deliver sustained power, but was useful for propelling weaponry at high speeds towards enemies in battle and for fireworks. After invention, this innovation spread throughout Europe. 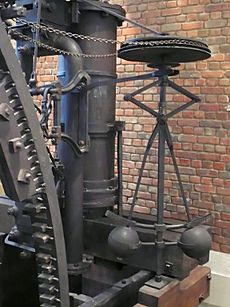 The Watt steam engine was the first type of steam engine to make use of steam at a pressure just above atmospheric to drive the piston helped by a partial vacuum. Improving on the design of the 1712 Newcomen steam engine, the Watt steam engine, developed sporadically from 1763 to 1775, was a great step in the development of the steam engine. Offering a dramatic increase in fuel efficiency, James Watt's design became synonymous with steam engines, due in no small part to his business partner, Matthew Boulton. It enabled rapid development of efficient semi-automated factories on a previously unimaginable scale in places where waterpower was not available. Later development led to steam locomotives and great expansion of railway transportation.

As for internal combustion piston engines, these were tested in France in 1807 by de Rivaz and independently, by the Niépce brothers. They were theoretically advanced by Carnot in 1824. In 1853-57 Eugenio Barsanti and Felice Matteucci invented and patented an engine using the free-piston principle that was possibly the first 4-cycle engine.

The invention of an internal combustion engine which was later commercially successful was made during 1860 by Etienne Lenoir.

In 1877 the Otto cycle was capable of giving a far higher power to weight ratio than steam engines and worked much better for many transportation applications such as cars and aircraft. 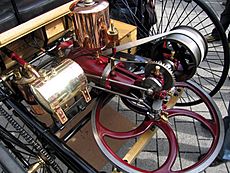 Engine of the Benz Patent Motorwagen

The first commercially successful automobile, created by Karl Benz, added to the interest in light and powerful engines. The lightweight petrol internal combustion engine, operating on a four-stroke Otto cycle, has been the most successful for light automobiles, while the more efficient Diesel engine is used for trucks and buses. However, in recent years, turbo Diesel engines have become increasingly popular, especially outside of the United States, even for quite small cars.

A toy steam engine. Fuel is burn in the tray at the bottom, steam is made in boiler which works the piston (the blue part), which turns the wheel

Early kinds of engine used heat that was outside of the engine itself to heat up a gas to a high pressure. This was usually steam and the engines are called steam engines. The steam was piped to the engine where it pushed on pistons to bring about motion. These engines were commonly used in old factories, boats and trains.

There are lots of different configurations of piston engines. Their cylinders have pistons in them and a crankshaft. Any number of cylinders can be used but 1, 2, 3, 4, 6, 8, 10 and 12 are common. The cylinders can be arranged in many ways, in a straight line, at an angle to each other or in a circle.

A Wankel engine has no cylinders and uses a triangle shaped rotor spinning in an oval housing which mimics the movement of a piston.

Hot gas can also be made to push a turbine around rather like the way the wind turns a windmill. Most electric power stations use big steam turbines. Others use water or wind turbines. Smaller turbines use internal combustion. Jet engines used in aircraft are a kind of turbine engine. 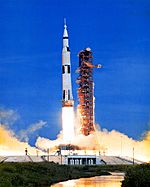 A rocket causes movement by shooting jets of gas very fast out of a nozzle. The gas may have been stored under pressure or be a chemical fuel that burns to make a very hot gas. Although they are very simple, rockets are the most powerful engines we know how to make. They will work in space where there is nothing to push against. 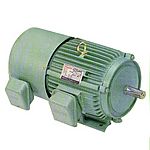 Electric motors do not use a fuel. The energy is supplied to them by electricity carried along wires. The energy may come from a fuel being burnt somewhere else a long way off. The electricity is used to make powerful magnets inside the motor switch on and off at the right time to turn the shaft of the motor.

Electric engine is not a motor, but a railway locomotive which runs on electricity.

All content from Kiddle encyclopedia articles (including the article images and facts) can be freely used under Attribution-ShareAlike license, unless stated otherwise. Cite this article:
Engine Facts for Kids. Kiddle Encyclopedia.