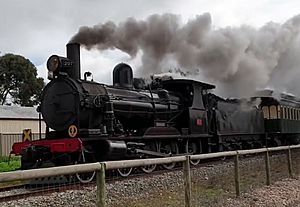 A steam locomotive is a steam powered railway locomotive. It was used a lot between about 1830 and 1970. Afterwards, diesel and electric locomotives were used more often. The first steam locomotive was made by Richard Trevithick for a railway used for moving iron at an ironworks in Wales. A steam locomotive works by burning a fuel like coal in a special space called a firebox. This produces hot gases that rise and go through tubes in a boiler - a large space with water in it. This heats the water, producing steam. The steam is then taken through another tube to a cylinder. The steam then pushes the piston which in turn pushes a metal rod that is connected to the wheels, making the locomotive move. The steam then rises out through the chimney.

Steam locomotives are still today used in many developing countries where the railways have not yet been electrified.

The earliest railways employed horses to draw carts along rail tracks. In 1784, William Murdoch, a Scottish inventor, built a small-scale prototype of a steam road locomotive in Birmingham. A full-scale rail steam locomotive was proposed by William Reynolds around 1787. An early working model of a steam rail locomotive was designed and constructed by steamboat pioneer John Fitch in the US during 1794. His steam locomotive used interior bladed wheels guided by rails or tracks. The model still exists at the Ohio Historical Society Museum in Columbus. The authenticity and date of this locomotive is disputed by some experts and a workable steam train would have to await the invention of the high-pressure steam engine by Richard Trevithick, who pioneered the use of steam locomotives. 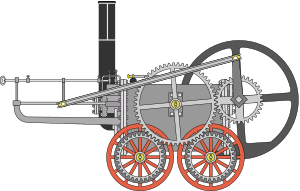 The first full-scale working railway steam locomotive, was the 3 ft (914 mm) gauge Coalbrookdale Locomotive, built by Trevithick in 1802. It was constructed for the Coalbrookdale ironworks in Shropshire in the United Kingdom though no record of it working there has survived. On 21 February 1804, the first recorded steam-hauled railway journey took place as another of Trevithick's locomotives hauled a train along the 4 ft 4 in (1,321 mm) tramway from the Pen-y-darren ironworks, near Merthyr Tydfil, to Abercynon in South Wales. Accompanied by Andrew Vivian, it ran with mixed success. The design incorporated a number of important innovations that included using high-pressure steam which reduced the weight of the engine and increased its efficiency.

Trevithick visited the Newcastle area in 1804 and had a ready audience of colliery (coal mine) owners and engineers. The visit was so successful that the colliery railways in north-east England became the leading centre for experimentation and development of the steam locomotive. Trevithick continued his own steam propulsion experiments through another trio of locomotives, concluding with the Catch Me Who Can in 1808. 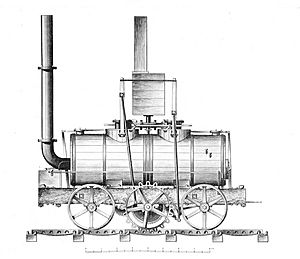 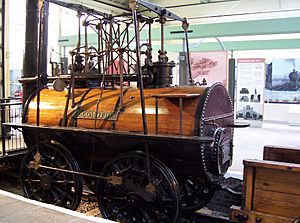 The Locomotion at Darlington Railway Centre and Museum

In 1812, Matthew Murray's successful twin-cylinder rack locomotive Salamanca first ran on the edge-railed rack-and-pinion Middleton Railway. Another well-known early locomotive was Puffing Billy, built 1813–14 by engineer William Hedley. It was intended to work on the Wylam Colliery near Newcastle upon Tyne. This locomotive is the oldest preserved, and is on static display in the Science Museum, London.

George Stephenson, a former miner working as an engine-wright at Killingworth Colliery, developed up to sixteen Killingworth locomotives, including Blücher in 1814, another in 1815, and a (newly-identified) Killingworth Billy in 1816. He also constructed The Duke in 1817 for the Kilmarnock and Troon Railway, which was the first steam locomotive to work in Scotland.

In 1825, George Stephenson built Locomotion No. 1 for the Stockton and Darlington Railway, north-east England, which was the first public steam railway in the world. In 1829, his son Robert built in Newcastle The Rocket which was entered in and won the Rainhill Trials. This success led to the company emerging as the pre-eminent builder of steam locomotives used on railways in the UK, US and much of Europe. The Liverpool and Manchester Railway opened a year later making exclusive use of steam power for passenger and goods trains. 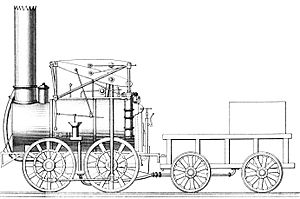 Many of the earliest locomotives for American railroads were imported from Great Britain, including first the Stourbridge Lion and later the John Bull (still the oldest operable engine-powered vehicle in the United States of any kind, as of 1981) however a domestic locomotive-manufacturing industry was quickly established. The Baltimore and Ohio Railroad's Tom Thumb in 1830, designed and built by Peter Cooper, was the first US-built locomotive to run in America, although it was intended as a demonstration of the potential of steam traction, rather than as a revenue-earning locomotive. The DeWitt Clinton was also built in the 1830s.

The first railway service outside the United Kingdom and North America was opened in 1829 in France between Saint-Etienne and Lyon. Then on 5 May 1835, the first line in Belgium linked Mechelen and Brussels. The locomotive was named The Elephant. 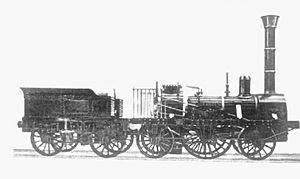 Photo of the Adler made in the early 1850s

In Germany, the first working steam locomotive was a rack-and-pinion engine, similar to the Salamanca, designed by the British locomotive pioneer John Blenkinsop. Built in June 1816 by Johann Friedrich Krigar in the Royal Berlin Iron Foundry (Königliche Eisengießerei zu Berlin), the locomotive ran on a circular track in the factory yard. It was the first locomotive to be built on the European mainland and the first steam-powered passenger service; curious onlookers could ride in the attached coaches for a fee. It is portrayed on a New Year's badge for the Royal Foundry dated 1816. Another locomotive was built using the same system in 1817. They were to be used on pit railways in Königshütte and in Luisenthal on the Saar (today part of Völklingen), but neither could be returned to working order after being dismantled, moved and reassembled. On 7 December 1835, the Adler ran for the first time between Nuremberg and Fürth on the Bavarian Ludwig Railway. It was the 118th engine from the locomotive works of Robert Stephenson and stood under patent protection. 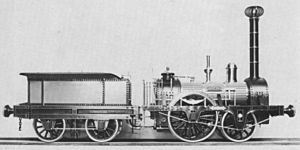 The Austria, the first locomotive in Austria

In 1837, the first steam railway started in Austria on the Emperor Ferdinand Northern Railway between Vienna-Floridsdorf and Deutsch-Wagram. The oldest continually working steam engine in the world also runs in Austria: the GKB 671 built in 1860, has never been taken out of service, and is still used for special excursions.

In 1838, the third steam locomotive to be built in Germany, the Saxonia, was manufactured by the Maschinenbaufirma Übigau near Dresden, built by Prof. Johann Andreas Schubert. The first independently designed locomotive in Germany was the Beuth, built by August Borsig in 1841. The first locomotive produced by Henschel-Werke in Kassel, the Drache, was delivered in 1848.

The first steam locomotives operating in Italy were the Bayard and the Vesuvio, running on the Napoli-Portici line, in the Kingdom of the Two Sicilies.

The first railway line over Swiss territory was the Strasbourg–Basle line opened in 1844. Three years later, in 1847, the first fully Swiss railway line, the Spanisch Brötli Bahn, from Zürich to Baden was opened.

All content from Kiddle encyclopedia articles (including the article images and facts) can be freely used under Attribution-ShareAlike license, unless stated otherwise. Cite this article:
Steam locomotive Facts for Kids. Kiddle Encyclopedia.