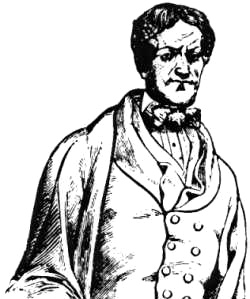 John Fitch (January 21, 1743 – July 2, 1798) was an American inventor, clockmaker, entrepreneur and engineer. He was most famous for operating the first steamboat service in the United States.

Fitch was born to Joseph Fitch and Sarah Shaler in Windsor, Connecticut, on January 21, 1743, on a farm that is part of present-day South Windsor, Connecticut. He received little formal schooling and eventually apprenticed himself to a clockmaker. During his apprenticeship, Fitch was not allowed to learn or even observe watchmaking (he later taught himself how to repair clocks and watches).

He married Lucy Roberts December 29, 1767. Following this apprenticeship in Hartford, he opened an unsuccessful brass foundry in East Windsor, Connecticut, and then a brass and silversmith business in Trenton, New Jersey, which succeeded for eight years but was destroyed by British troops during the American Revolution.

He served briefly during the Revolution, mostly as a gunsmith working for the New Jersey militia. He left his unit after a dispute over a promotion but continued his work repairing and refitting arms in Trenton. In the fall of 1777, Fitch provided beer and tobacco to the Continental Army in Philadelphia. During the following winter and spring, he provided beer, rum and other supplies to troops at Valley Forge.

In 1780, he began work as a surveyor in Kentucky where he recorded a land claim of 1,600 acres (6.5 km2) for himself. In the spring of 1782, while surveying in the Northwest Territory, he was captured by Indians and turned over to the British, who eventually released him. 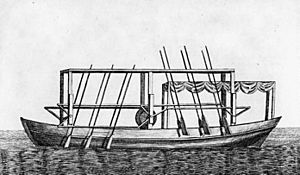 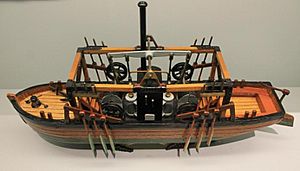 By 1785, Fitch was done with surveying and settled in Warminster, Pennsylvania, where he began working on his ideas for a steam-powered boat. Unable to raise funds from the Continental Congress, he persuaded various state legislatures to award him a 14-year monopoly for steamboat traffic on their inland waterways. With these monopolies, he was able to secure funding from businessmen and professional citizens in Philadelphia.

Fitch had seen a drawing of an early British Newcomen atmospheric engine in an encyclopedia, but Newcomen engines were huge structures designed to pump water out of mines. He had somehow heard about the more efficient steam engine developed by James Watt in Scotland in the late 1770s, but there was not a single Watt engine in America at that time, nor would there be for many years (Fulton's exported model in his 1807 steamboat, Clermont, would be one of the first) because Britain would not allow the export of any new technology to its former colony. As a result, Fitch attempted to design his own version of a steam engine. He moved to Philadelphia and engaged the clockmaker and inventor Henry Voigt to help him build a working model and place it on a boat.

The first successful trial run of his steamboat Perseverance was made on the Delaware River on August 22, 1787, in the presence of delegates from the Constitutional Convention. It was propelled by a bank of oars on either side of the boat. During the next few years, Fitch and Voigt worked to develop better designs, and in June 1790 launched a 60-foot (18 m) boat powered by a steam engine driving several stern-mounted oars. These oars paddled in a manner similar to the motion of a swimming duck's feet. With this boat, he carried up to 30 paying passengers on numerous round-trip voyages between Philadelphia and Burlington, New Jersey during the summer of 1790. Estimates of miles traveled that summer range from 1,300 to 3,000, and Fitch claimed that the boat often went for 500 miles without mechanical problems. Estimated speeds were of a minimum 6 miles per hour under unfavorable conditions, to a maximum of 7 or 8 miles per hour. 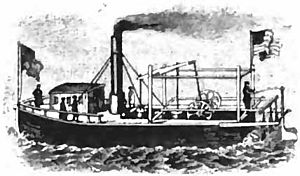 Fitch was granted a U.S. patent on August 26, 1791, after a battle with James Rumsey, who had also invented a steam-powered boat. The newly created federal Patent Commission did not award the broad monopoly patent that Fitch had asked for, but rather a patent of the modern kind, for the new design of Fitch's steamboat. It also awarded steam-engine-related patents dated that same day to Rumsey, Nathan Read, and John Stevens. The loss of a monopoly due to these same-day patent awards led many of Fitch's investors to leave his company. While his boats were mechanically successful, Fitch no longer had the financial resources to carry on.

Fitch's idea would be turned profitable two decades later by Robert Fulton. Though Fulton was able to obtain a monopoly in the state of New York because of the powerful influence of his partner Robert Livingston, he was unable to gain a U.S. patent largely because he could not demonstrate the originality of his designs. Also, an original member of Fitch's company, William Thornton, had become head of the newly created Patent Office, and made the application process even more difficult for Fulton. Fitch had also received a patent in 1791 from France, and in 1793, having given up hope of building a steamboat in America, he left for France, where an American investor, Aaron Vail, had promised to help him build a boat there. But Fitch arrived just as the Reign of Terror was beginning, and his plans had to be abandoned. He made his way to London to make an attempt there, but that also failed. He returned to the United States in 1794 and made a few more tries to build a steamboat.

Failing this, he moved to Bardstown, Kentucky, in 1797, where he hoped to sell some of the lands he had acquired there in the early 1780s, and use the proceeds to build a steamboat for use on the Ohio or Mississippi River. He arrived to find settlers occupying his properties, resulting in legal disputes that occupied him until his death on July 2, 1798 in Bardstown.

While living in Kentucky, Fitch continued to work on steam engine ideas. He built two models. One was lost in a fire in Bardstown, but the other was found in the attic of his daughter's house in Ohio in 1849. That model still exists at the Ohio Historical Society Museum in Columbus. In the 1950s, a curator from the Smithsonian Museum examined it and concluded that it was "the prototype of a practical land-operating steam engine," meant to operate on tracks – in other words, a steam locomotive.

In 1802, the Englishman Richard Trevithick invented a full-size steam locomotive that, in 1804, hauled the world's first locomotive-hauled railway train, and within a short time the British invention led to the development of actual railways. Americans began importing English locomotives and copying them.

A life of continual failure, frustration and litigation wore Fitch down. He began drinking heavily once he returned to Bardstown in 1797. He died on July 2, 1798, at the age of 55, and was buried in Bardstown.

Fitch's legal dispute over state monopoly rights with fellow steamboat inventor James Rumsey and others helped bring about the enactment of the first Patent Act of 1790. He is mentioned in the personal letters of several historical figures, including George Washington, Benjamin Franklin, Thomas Jefferson, and James Madison.

Despite his obscurity among other American inventors and engineering pioneers, such as Fulton and Peter Cooper, Fitch's contributions have not been forgotten and has been remembered with a number of memorials and namesakes. The John Fitch Steamboat Museum on the grounds of Craven Hall in Warminster, Pennsylvania includes a one tenth scale (6 feet (1.8 m)-long), 100 pounds (45 kg) model of Fitch's original steamboat.

All content from Kiddle encyclopedia articles (including the article images and facts) can be freely used under Attribution-ShareAlike license, unless stated otherwise. Cite this article:
John Fitch (inventor) Facts for Kids. Kiddle Encyclopedia.