Levittown (L-Town) is a census-designated place (CDP) and planned community in Bucks County, Pennsylvania, United States, within the Philadelphia metropolitan area. The population was 52,983 at the 2010 census. It is 40 feet (12 m) above sea level. Though not a municipality, it is sometimes recognized as the largest suburb of Philadelphia in Pennsylvania (while Upper Darby Township, Lower Merion Township, Bensalem Township, Abington Township and Bristol Township are municipalities larger in size in the three surrounding Pennsylvania counties). Starting with land purchased in 1951, it was planned and built by Levitt & Sons. The brothers William Levitt and architect Alfred Levitt designed its six typical houses.

The majority of the land on which it is built was purchased in 1951. Levitt and Sons only built six models of house in Levittown, all single-family dwellings with lawns: the Levittowner, the Rancher, the Jubilee, the Pennsylvanian, the Colonial and the Country Clubber, with only modest exterior variations within each model. The homes were moderately priced and required only a low down payment. Construction of Levittown began in February 1952, soon after completion of Levittown, New York, located on Long Island. Levittown, Pennsylvania was the second "Levittown" built by William J. Levitt, who is often credited as the creator of the modern American suburb. To speed up construction, Levitt & Sons perfected a 26-step rationalized building method that was essentially an assembly line type of home building. The house remained stationary, while the construction workers moved from house to house. Each worker had one task such as pouring slabs, framing, installing electric sockets or installing washing machines. This highly regimented process enabled Levitt's workers to produce a finished house every 16 minutes. Construction of the homes commenced in 1952 and when completed in 1958, 17,311 homes were built.

What set Levittown apart from other developments at the time was that it was built as a complete community. Levitt & Sons designed neighborhoods with traffic-calming curvilinear roads, in which there were no four-way intersections. Each neighborhood had within its boundaries a site donated by Levitt & Sons for a public elementary school. Locations for churches and other public facilities were set aside on main thoroughfares such as the Levittown Parkway, likewise donated by the builder to religious groups and other organizations. Other amenities included Olympic-sized public pools, parks, "greenbelts", baseball fields and playgrounds, and a shopping center located in neighboring Tullytown borough that was considered large and modern at the time of its construction (and in fact was the largest east of the Mississippi). The first set of four sample homes were put on display in a swatch of land near the future Levittown Shop-a-Rama, and an estimated 30,000 people viewed them in that first weekend. 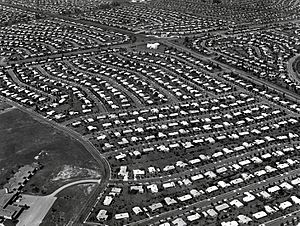 Aerial view of Levittown circa 1959

Residents (who are sometimes called Levittowners) were first expected to comply with a lengthy list of rules and regulations regarding the upkeep of their homes and use of their property. Two of these "rules" included a prohibition on hanging laundry out to dry on Sunday and not allowing homeowners to fence off their yards. These proved unenforceable over time, particularly when backyard pools became financially accessible to the working class and privacy concerns drove many to fence off their yards. In the years since Levitt & Sons ended construction, three- and four-story "garden apartments" and a number of non-Levitt owner-occupied houses have been built in Levittown.

Levitt & Sons would not sell homes to African Americans. Levitt did not consider himself to be a racist, considering housing and racial relations entirely separate matters. However, this did not prevent Bea and Lew Wechsler, a Jewish couple from the Bronx, from reselling a home to an African-American family. Levittown's first black couple, William and Daisy Myers, bought a home in the Dogwood Hollow section in 1957. Their move to Levittown was marked with racist harassment and mob violence, which required intervention by state authorities. This led to an injunction and criminal charges against the harassers while Myers and their supporters refused to surrender and received national acclaim for their efforts. For instance, Daisy Myers has been hailed as "The Rosa Parks of the North", who helped expose the northern states' problems with racial inequality of that time. Daisy Myers later wrote a book about her family's experiences. She died Dec. 5, 2011, in York, Pa. The National Association for the Advancement of Colored People and the American Civil Liberties Union opposed Levitt’s racist policies, and the Federal Housing Administration threatened to refuse mortgages on his next Levittown. Levitt still refused sell to blacks, developed plans for yet another whites-only Levittown, in Willingboro Township, N.J., and fought legal challenges in New Jersey courts until the U.S. Supreme Court refused to hear his case.

The community's otherwise placid exterior was again disturbed during the so-called suburban gas riots of June 1979 in the wake of the Camp David Peace Accords, which resulted in a second embargo by Arab oil-producing nations. The unrest occurred June 24–25, 1979, as lines swelled and tempers flared in the heart of Levittown at an intersection known as Five Points, a location surrounded by six service stations, two of which were severely damaged by vandalism in the riots. The two days of riots made national headlines and were mentioned (although not directly by name) in the draft of an address to the nation that was to have been delivered by President Jimmy Carter on July 5, 1979.

A baseball team from Levittown won the Little League World Series in 1960. Levittown American beat an opponent from Fort Worth, Texas, to win the honor.

The Levittown Shopping Center (known officially as—but rarely called—the "Levittown Shop-a-Rama"), located in Tullytown, was unusually designed. Two parallel strips of stores faced the parking lot with a courtyard that had green spaces, benches, and entrances to the stores. The center had one large anchor department store (Pomeroys, which was acquired by Boscov's) as well as staple stores of a growing suburban demand (JC Penney, Woolworth's, Sears-just hardware). The shopping center began a slow decline in the mid-1970s from which it never recovered with the building of the Oxford Valley Mall. The mall, located just north of Levittown, in Langhorne in Middletown Township, drew shoppers away from the older Levittown facility, given Oxford Valley's much larger size and enclosed shopping environment. In 2002, the redeveloped site of the Shop-a-rama was reopened as the Levittown Town Center. The completed facility contains 468,675 square feet (43,541.3 m2) of retail space.

Of the five public pools built by Levitt & Sons and operated by the Levittown Public Recreation Association (LPRA), four were closed in 2002 with the exception of one located in the Pinewood section. LPRA Headquarters (and other landmarks) of this prototypical post-war suburb of sometimes mythic importance have been the focus of historic preservation efforts. Since 2002, studies have been underway to establish the Levittown Historic District.

Since its inception in 1988, the Bucks County St. Patrick's Day Parade has been held in Levittown. Every year, the parade steps off from St Joseph the Worker Church, and proceeds two miles (3 km) on New Falls Road to Conwell-Egan Catholic High School.

Levittown is not an incorporated place, though efforts in the early 1950s were made to incorporate. Some Levittown residents feared that incorporation would lead to higher taxes, by robbing the prospective municipality of a commercial tax base. 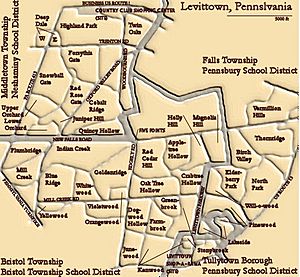 Map of the municipalities, school districts and original sections of Levittown. The thick gray lines are municipal borders.

The names of the streets within each section uniformly begin with the same letter that begins the name of the section in question except for the section of Green Lynne, which was not constructed by Bill Levitt. This plan offers a good clue as to where any particular street might be located. "X" and "Z" are not used for section or street names. As there are more than 24 section names, "road" is used for street names in sections to the west of Edgely Road, "lane" is used in those section to the east. Sections are surrounded by a "drive" with the same name as the section. For example, the Pinewood section is circled by Pinewood Drive, while Snowball Gate is surrounded by Snowball Drive. Some sections have their drive broken into multiple parts, with similar names. Forsythia Gate has Forsythia Drive North and Forsythia Drive South.

Red Rose Gate, Forsythia Gate, and Snowball Gate are collectively known as "The Gates." (These were the only sections without sidewalks so as to lend a more "executive" appearance to the neighborhoods.) Lakeside sits next to Levittown Lake. Magnolia Hill is on a prominent hill. Mill Creek is found next to a creek by the same name.

Southeastern Pennsylvania Transportation Authority (SEPTA) regional rail serves Levittown to the south at its Levittown-Tullytown station, and to the north at its Langhorne and Woodbourne stations. Interstate 95 runs to the north and west of Levittown (connecting it with Philadelphia and the suburbs north of Trenton); the Pennsylvania Turnpike runs southwest of Levittown (connecting it with the western suburbs and the New Jersey Turnpike), and U.S. 1 runs to the north, carrying traffic directly into downtown Trenton. The nearest international airport is Philadelphia International Airport (Airport Code PHL), approximately 34 miles (55 km) southwest of Levittown. The nearest Amtrak station is just across the Delaware River in Trenton, just over 9 miles (14 km) to the east.

Though a steel mill once operated by U.S. Steel Corporation provided employment in nearby Fairless Hills, many Levittowners have historically commuted by automobile or train to Philadelphia, some to Trenton, still others to more distant locales in as many as four states. Just over ten percent of employed Levittowners both live and work in the community.

Some students attend schools run by Roman Catholic, Lutheran, evangelical Protestant and Quaker organizations, in and around Levittown. 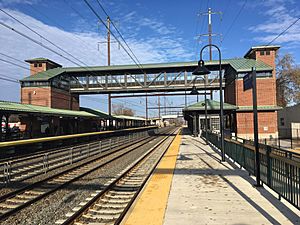 SEPTA Regional Rail serves Levittown to the south at its Levittown station on the Trenton Line, and to the north at its Langhorne and Woodbourne stations on the West Trenton Line. Interstate 295 (I-295) runs to the north and west of Levittown, connecting it with the suburbs north of Trenton. The Pennsylvania Turnpike (I-95) runs southwest of Levittown, connecting it with Philadelphia, the western suburbs, and the New Jersey Turnpike. U.S. Route 1 (US 1) runs to the north, carrying traffic directly into downtown Trenton. The nearest international airport is Philadelphia International Airport (Airport Code PHL), approximately 34 miles (55 km) southwest of Levittown. The nearest Amtrak station is just across the Delaware River in Trenton at the Trenton Transit Center, just over 9 miles (14 km) to the east.

Though a steel mill once operated by U.S. Steel provided employment in Falls Township, many Levittowners have historically commuted by automobile or train to Philadelphia, some to Trenton, still others to more distant locales in as many as four states. Just over ten percent of employed Levittowners both live and work in the community.

All content from Kiddle encyclopedia articles (including the article images and facts) can be freely used under Attribution-ShareAlike license, unless stated otherwise. Cite this article:
Levittown, Pennsylvania Facts for Kids. Kiddle Encyclopedia.