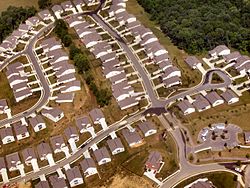 Housing subdivision near Union, Kentucky, a suburb of Cincinnati, Ohio.

A suburb is an area of a town or city, a little away from the main part, where there are fewer big buildings and mainly houses, schools and shops. These are called suburbs or 'the suburbs'. Sometimes, cities have suburbs that cover a very large area. The suburbs are part of the metropolitan area and may be legally part of the main city, or not.

Since the beginning of the twentieth century, cities have spread very quickly and spread farther. Transport in the form of trams, buses and cars allows commuting from distant homes to work in the inner city. This led to the growth of the suburbs. Housing commonly includes detached and semi-detached houses and flats. Houses are built farther apart than in the inner city and there is often space for gardens and parks.

As cities grow outwards, they begin to take over the surrounding countryside. Authorities have created Green belts on the undeveloped land around a city to prevent urban sprawl and to prevent the towns and cities merging into one. They also encourages development within the town, and protect the countryside. The need for new houses, particularly large detached and semi-detached houses in pleasant surroundings, means that some areas of green belt land have been built on and others are threatened. That's because it is cheaper to build on empty land than to redevelop brownfield sites in older parts of the town or city.

The English word is derived from the Old French subburbe, which is in turn derived from the Latin suburbium, formed from sub (meaning "under" or "below") and urbs ("city"). The first recorded usage of the term in English, was made by John Wycliffe in 1380, where the form subarbis was used, according to the Oxford English Dictionary. 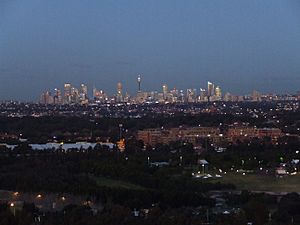 The Sydney city centre from the city's western suburbs

In Australia and New Zealand, suburbs (in the wider sense noted in the lead paragraph) have become formalised as geographic subdivisions of a city and are used by postal services in addressing. In rural areas in both countries, their equivalents are called localities (see suburbs and localities). The terms inner suburb and outer suburb are used to differentiate between the higher-density areas in proximity to the city centre (which would not be referred to as 'suburbs' in most other countries), and the lower-density suburbs on the outskirts of the urban area. The term 'middle suburbs' is also used. Inner suburbs, such as Te Aro in Wellington, Eden Terrace in Auckland, Prahran in Melbourne and Ultimo in Sydney, are usually characterised by higher density apartment housing and greater integration between commercial and residential areas.

In the United Kingdom and in Ireland, suburb merely refers to a residential area outside the city centre, regardless of administrative boundaries. Suburbs, in this sense, can range from areas that seem more like residential areas of a city proper to areas separated by open countryside from the city centre. In large cities such as London and Leeds, suburbs include formerly separate towns and villages that have been gradually absorbed during a city's growth and expansion, such as Ealing, Bromley, and Guiseley. 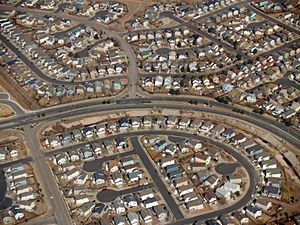 In the United States and Canada, suburb can refer either to an outlying residential area of a city or town or to a separate municipality or unincorporated area outside a town or city.

All content from Kiddle encyclopedia articles (including the article images and facts) can be freely used under Attribution-ShareAlike license, unless stated otherwise. Cite this article:
Suburb Facts for Kids. Kiddle Encyclopedia.