Griffith is a major regional city in the Murrumbidgee Irrigation Area that is located in the north-western part of the Riverina region of New South Wales, known commonly as the food bowl of Australia. It is also the seat of the City of Griffith local government area. Like the Australian capital, Canberra, and extensions to the nearby town of Leeton, Griffith was designed by Walter Burley Griffin and Marion Mahony Griffin. Griffith was named after Arthur Hill Griffith, the then New South Wales Secretary for Public Works. Griffith was proclaimed a city in 1987, and had a population of 20,251 in June 2018.

Griffith was established in 1916 as part of the New South Wales State Government's Murrumbidgee Irrigation Area (MIA) project to supply irrigation from the Murrumbidgee river in western New South Wales to be used for farming. The main dam was the large Burrinjuck Dam between Gundagai and Canberra, which stored water to be released down the river for irrigation. Berembed Weir, near Narrandera, was built across the Murrumbidgee River, from which flows the Main Canal. The Canal, almost a river in its own right, flows through the MIA to Griffith, supplying water to the entire area, and petering out to the northwest of the city in rice farms.

The water supply was further enhanced with the construction of the Snowy River scheme by the Australian Federal Government in the 1950s and 1960s. The Blowering Dam, a large dam near Tumut stores a significant amount of water to be released down the Murrumbidgee for irrigation around Leeton, Griffith and the newer Coleambally area south of the Murrumbidgee and Griffith.

From the start of the MIA, citrus and other fruit and vegetables were grown in abundance around Griffith. In the 1950s the irrigation area expanded to include large rice farms. Vineyards were established early, and wineries followed, beginning with McWilliam's Wines at Hanwood and Yenda, two villages just outside the city.

From its earliest days, the MIA was populated by Italian workers, some of whom were initially employed by Australian farmers to run steamboats on the Murrumbidgee and Murray Rivers. Approximately 60% of today's Griffith population claim Italian background. These include the initial settlement of Italians from the boat crews and other Italians who came out to Australia in the Depression, or from a second wave of immigrant Italians who came to Griffith in the late 1950s and early 1960s.

Griffith is associated with good wine and food, primarily as a result of its diverse population, with notable contributions by Italian-Australians. Griffith's multi-ethnic population is now absorbing new national groups, including a significant Sikh Indian community. The city is sister city with the Italian city of Treviso in the Veneto Region. Many Italians in Griffith are from the Veneto Region or the Calabria Region of Italy.

The Italian influence expanded the range of fruit and vegetables, and also significantly increased the number of wineries and the range of wines produced by the existing wineries in the region, such as McWilliam's. De Bortoli, Rosetto and other wineries were established by Italian immigrants, and today they are well known around Australia. In recent times they have been joined by one of the country's best known wine labels, Yellow Tail, produced by Casella Family Brands. Casella, DeBortoli, McWilliam's, Warburn and Berton Vineyards are now among the top 20 wine producers in Australia.

Griffith is the cathedral city of the Anglican Diocese of Riverina. The foundation stone of the Parish Church of St Alban the Martyr was dedicated in 1954. It was proclaimed as a cathedral in 1984.

The city of Griffith had contained no traffic lights up until February 2010 when the first set of traffic lights was installed at the intersection of Burrell Place and Wakaden Street.

Griffith has a semi-arid climate (BSk) under the Köppen climate classification with hot summers and cool winters. A record high temperature of 46.0 degrees was reached on 23 Jan 2001, while a record low of –6.0 degrees was recorded on 17 July 1977. 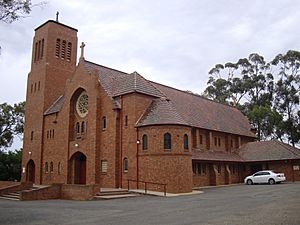 Griffith is a major junction for the Kidman Way, Burley Griffin Way and Irrigation Way. Griffith is located 550 km west of Sydney via Burley Griffin Way and Irrigation Way and 450 km north of Melbourne via the Kidman Way. Griffith has daily bus services to the major metropolitan areas. Griffith Airport operates daily flights to Sydney (Melbourne in the past, but not currently).

The railway reached Griffith on 3 July 1916 and since that date has provided a service transporting passengers and goods into and out of the area. Regular goods trains continue, making it a unique railway centre.

V/Line operates a daily rail/road coach service between Melbourne and Griffith, changing with the train at Shepparton. Melbourne (Southern Cross Station) to Griffith (Bus Terminal at Visitors Centre) is an evening service (daily); Griffith to Melbourne service is overnight (Mon to Sat) / afternoon (Sunday). Travel time is approximately six and a half to seven hours. 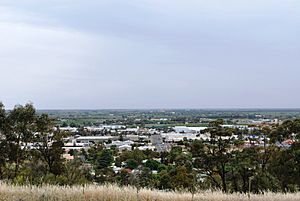 Griffith has many tourist attractions. These include Pioneer Park, a 510-seat Regional Theatre, the Italian museum, the Griffith Regional Art Gallery, craft and antique shops, and its many high standard restaurants. Many of the Griffith wineries also have wine tasting at the cellar door, notably De Bortoli Wines, McWilliams, Beelgara Estate (formally Rossetto Wines), West End Wines, Berton Vineyards and Warburn Estate. Griffith is famous for its botrytis including Debortoli's Noble One and its fortified wine such as McWilliam's Hanwood Port. Ecotourism is also available in Griffith. Scenic Hill has various walking trails, lookouts and is home to the famous Hermit's Cave. Nericon Swamp, part of the Griffith Wetlands Important Bird Area, is an important site for migratory birds. Nearby Cocoparra National Park offers walking trails and there are opportunities to explore along the Murrumbidgee River and Lake Wyangan.

Griffith, is twinned with: 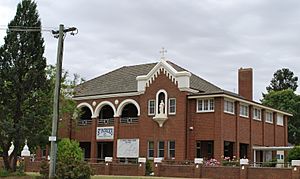 Griffith is the third largest centre for education in the Riverina after Wagga Wagga and Leeton. Griffith is home to three high schools:

Griffith also has 13 primary schools and various day care and pre-school facilities. Griffith has one of the largest campuses of Riverina Institute of TAFE. There has been recent plans to construct a fifth campus of Charles Sturt University in Griffith.

The most popular sport in Griffith is Rugby League. Griffith is home to two clubs in the Group 20 Rugby League competition, the Griffith Black and White Panthers, and the Griffith Waratahs Tigers. The two clubs are among the most successful in the league with 6 and 13 titles respectively. A third team, the Yenda Blueheelers, based in the small town of Yenda, New South Wales, 15 kilometres from Griffith, also compete in this competition and have won 7 titles and a Clayton Cup as the best team in the state in 2009.

Griffith is also home to the Griffith Swans who compete in the Riverina Football League. They have won one title, in 2003, and have been runners-up many times.

Griffith also has a rugby union team, the Griffith Blacks who play in the Southern Inland Rugby Union.

All content from Kiddle encyclopedia articles (including the article images and facts) can be freely used under Attribution-ShareAlike license, unless stated otherwise. Cite this article:
Griffith, New South Wales Facts for Kids. Kiddle Encyclopedia.