The Age facts for kids 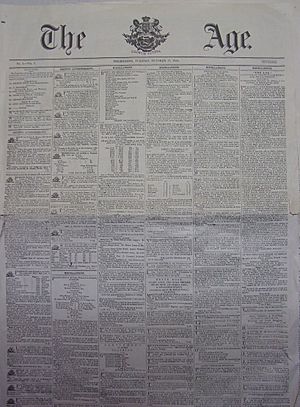 The first edition of The Age

The Age is a newspaper made in Melbourne, Australia. It is owned by an Australian company called Fairfax, and its first edition was on 17 October 1854.

The newspaper was first made by John and Henry Cooke. They also had a merchant business called Francis Cooke and Co.. They said they would use the newspaper to help miners in the Australian Gold Rush. The newspaper has become very popular since then. According to its website, it gets up to 957,000 on Saturdays. The editor is Andrew Jaspan, who got the job in 2004. He got in trouble in 2008 when The Age journalists agreed that he had been making it hard for them to make news reports independently.

All content from Kiddle encyclopedia articles (including the article images and facts) can be freely used under Attribution-ShareAlike license, unless stated otherwise. Cite this article:
The Age Facts for Kids. Kiddle Encyclopedia.