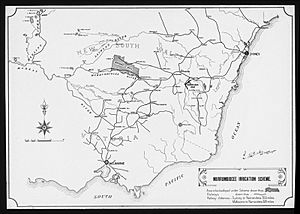 1908 map of the Murrumbidgee Irrigation Area

The Murrumbidgee Irrigation Area (MIA) is geographically located within the Riverina area of New South Wales. It was created to control and divert the flow of local river and creek systems for the purpose of food production. The main river systems feeding and fed by the area are the Murrumbidgee and the Tumut. It is one of the most diverse and productive regions in Australia contributing over A$5 billion annually to the Australian economy.

The system is still regarded as a major engineering achievement comprising an elaborate series of weirs, canals and holding ponds (fed by upstream rivers and dams).

Many of the towns within the area which include Leeton and Griffith were purpose built and designed for the project and remain as thriving communities today. The two towns are growing at a rapid rate due to sustainable employment. The growth of inland centres is unusual for central New South Wales which displays the uniqueness of the MIA.

The layout of the towns of Giffith and Leeton were designed in 1914 by Walter Burley Griffin, an American architect and town planner who had just won the competition for the plan for Canberra in 1912.

All content from Kiddle encyclopedia articles (including the article images and facts) can be freely used under Attribution-ShareAlike license, unless stated otherwise. Cite this article:
Murrumbidgee Irrigation Area Facts for Kids. Kiddle Encyclopedia.