The Riverina is a large farming area in the south west of New South Wales, Australia. It has flat plains, warm to hot climate and a large supply of water for irrigation. This has allowed the Riverina to become one of the most productive and agriculturally varied areas of Australia. With the state of Victoria to the south, and the mountains of the Great Dividing Range to the east, the Riverina covers those areas of New South Wales in the Murray and Murrumbidgee river systems.

The Riverina has been home to Aboriginal groups for over 40,000 years. It was first settled by Europens in the mid-19th century as a pastoral region growing beef and wool for markets in Australia and overseas. In the 20th century, the building of major irrigation areas in the Murray and Murrumbidgee valleys has led to the introduction of crops such as rice and grapes. The Riverina has strong links to Victoria, and the region was the source of much of the push behind the federation of Australian colonies.

The major cities and towns in the Riverina include Wagga Wagga, Albury and Griffith. Albury and Wagga Wagga are home to campuses of Charles Sturt University. Wagga Wagga is home to two major Australian Defence Force bases. 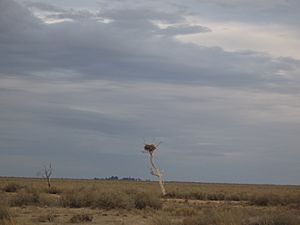 An eagle's nest on The Old Man Plain, a large saltbush plain between Hay and Wanganella

The area of the Riverina region is not fixed, but it usually includes the farming and pastoral areas of New South Wales, west of the Great Dividing Range and in the drainage basin of the snow-fed Murray and Murrumbidgee Rivers. The north edge of the Riverina is the Lachlan River catchment area known as the Central West. Along the Murray to the south, the Riverina border is the state of Victoria. West of where the Murray and Murrumbidgee meet, is the beginning of the drier Far West region.

In general, the Riverina is an alluvial plain formed by soil carried from the Great Dividing Range by streams between 30,000 to 15,000 years ago. The landscape includes rolling hills to the east but then becomes flatter to the west with most of that plain reaching less than 200 metres (660 ft) above sea level. The western Riverina is mainly flat saltbush plain. 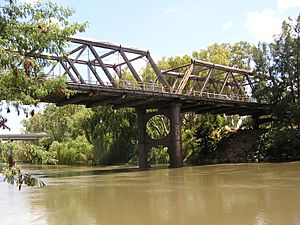 The closed Hampden Bridge over the Murrumbidgee River at Wagga Wagga The new Wiradjuri Bridge is in the background.

The geology of the Riverina has several troughs and sedimentary basins. The western Riverina is thought to be the end of the Ballarat and Bendigo geological zone. The eastern part is over the top of the western part of the Lachlan Fold Belt. It is possible that the Riverina has mineral deposits including coal, petroleum, coal seam methane, gypsum, gold, Cobar style polymetallic systems, heavy mineral sands and possibly diamonds in these fold belt rocks and basins. Riverina soils are generally sandy along the rivers, with more saline grey and brown clays found on rarely flooded areas on the edge of the floodplain. As the Murrumbidgee flows downstream, the water and soil become more saline.

The Riverina is drained by the large Murray-Darling Basin. Rivers and streams in the Riverina generally flow east to west. As well as the Murray, Murrumbidgee and Lachlan, other streams include Billabong Creek and the Edward River, an anabranch of the Murray. Much of the water carried by these streams is taken out for other uses. In 2001–2002, 52% of the Murray and Murrumbidgee water was taken, with 77% of that water used for irrigation.

All content from Kiddle encyclopedia articles (including the article images and facts) can be freely used under Attribution-ShareAlike license, unless stated otherwise. Cite this article:
Riverina Facts for Kids. Kiddle Encyclopedia.