Captain Charles Napier Sturt (28 April 1795 – 16 June 1869) was a British explorer of Australia, and part of the European exploration of Australia. He led several expeditions into the interior of the continent, starting from both Sydney and later from Adelaide. His expeditions traced several of the westward-flowing rivers, establishing that they all merged into the Murray River. He was searching to determine if there was an "inland sea".

Sturt was born in Bengal, India where his father was a judge. He went to England to go to school and in 1813 he joined the British Army. He served in France and Ireland. In 1826 Sturt went back to England and was then sent to Australia in charge of a group of convicts.

People at this time thought that Australia's inland rivers which flowed west, must have flowed into an inland sea. Another explorer, John Oxley had been stopped from going west down the Lachlan and Macquarie Rivers by a marsh which he thought was the edge of the sea. Sir Ralph Darling, Governor of New South Wales thought that it would be easier to travel in a drought (a long time without rain). This would mean the swamps and marshes would be dry. Darling put Sturt in charge. On 10 November 1828, Sturt and a group of 13 men, including explorer Hamilton Hume, went to find the path of the Macquarie River. They followed the Macquarie River, the Bogan River and the Castlereagh River and found the Darling River which he named after the Governor. They followed the river near from the present town of Bourke for about 100 km (62 mi) downstream towards the south west. They then went back to Sydney.

On 3 November 1829, Sturt led another group of eight men to follow the path of the Murrumbidgee River. Governor Darling wanted to know where the river went and to find out if it joined the Lachlan River. They went west from Sydney until they reached the Murrumbidgee near the present site of Jugiong and traveled along the river bank as far as the Lachlan River. From there Sturt used a small boat to travel down the river and reached the Murray River on 14 January 1830. The river had already been discovered six years earlier by Hamilton Hume and William Hovell and named the Hume River. Sturt, probably hoping for a reward, renamed the river after Sir George Murray, a British politician. After several days, they found a large river joining the Murray from the north, and Sturt correctly guessed that this was the Darling River. He set up a flag pole and raised the British flag, the Union Jack, and had his men give three loud cheers. The group continued down the river and reached Lake Alexandrina which he named after Princess Alexandrina, later Queen Victoria on 9 February 1830. After finding where the Murray entered the sea, the group then had the difficult and tiring work of rowing the boat back up the river. They left the river near the present site of Narrandera on 11 April 1830 and walked back to Sydney, getting there on 25 May 1830. Sturt became very sick after the trip and became blind. 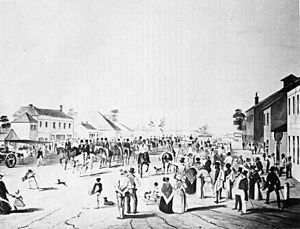 Sturt was driven by a conviction that it was his destiny to discover a great salt water lake, known as 'the inland sea', in the middle of Australia. At very least, he wanted to be the first explorer to plant his foot in 'the centre' of Australia. In August 1844, he set out with a party of 15 men, 200 sheep, six drays and a boat to explore north-western New South Wales and to advance into central Australia. They travelled along the Murray River and Darling River before passing the future site of Broken Hill, but were then stranded for months by the extreme summer conditions near the present site of Milparinka. When the rains eventually came Sturt moved north and established a depot at Fort Grey in today's Sturt National Park. With a small group of men, including explorer John McDouall Stuart as his draughtsman, Sturt pressed on across Sturt's Stony Desert and into the Simpson Desert, at which point he was unable to go further and turned back to the depot. Sturt made a second attempt to reach the centre of Australia, but he developed scurvy in the extreme conditions. His health broke down and he was forced to abandon the attempt. John Harris Browne, surgeon on the expedition, assisted Sturt, took over leadership of the party and after travelling 3,000 miles (4,800 km) brought it back to safety.

Retirement from the Army

Sturt was sent to Norfolk Island in August 1830 on military duty. Norfolk Island was a penal colony where difficult prisoners were sent. He stayed there until January 1832 and then went back to Sydney. Unable to get more important work and still unable to see properly, he went to England and left the army in July 1833. He wrote a book called Two Expeditions into the Interior of Southern Australia, 1828—1831. Sturt was rewarded with 5,000 acres (2,023 ha) of land in New South Wales, and in September 1834 sailed to Sydney with his new wife, Charlotte Green.

When he got back to Australia, he took up land near Canberra, then land at Mittagong, and in 1837 moved to Varroville, a farm near Liverpool. Sturt took a herd of cattle overland to Adelaide in 1838. He did more exploring around Adelaide including a trip back to Lake Alexandrina, and north to St.Vincent's Gulf. He moved his family to Adelaide in 1839.

Sturt was made the Surveyor-General (the person in charge of surveying) by the Governor of South Australia, but a new surveyor arrived who had been put in charge by the government in England. He worked as Assistant Land Commissioner until this job was abolished by England. For a short time worked as the Registrar-General, but this job did not pay as much money. He was unhappy, and hoped a new expedition would improve his chances of a better job. He wanted to go into the middle of Australia and look for an inland sea. Another explorer, Edward John Eyre had found his way to the north blocked by what he thought was a huge salt lake, shaped like a horse shoe. It was really six large dry salt lakes. Sturt hoped that he could get around the lakes by going farther to the east.

Sturt and 16 men left Adelaide on 15 August 1844, with 11 horses, 200 sheep, 32 bullocks, six dogs, a number of carts, wagons and a boat. They followed the Darling River north to Menindee Laidley's Ponds. On 15 January 1845 the group reached a waterhole 16 km (10 mi) west of the present site of Milparinka. They called this creek Preservation Creek, and named their camp by the waterhole Depot Glen.

Because of the heat and drought, Sturt decided to rest the expedition there for six months. They dug an underground room to try and get away from the heat. It was so hot the lead fell out of their pencils, and the wood of their equipment boxes shrank so much that the screws fell out. The man who was second in charge, an Irish surveyor named James Poole, died from scurvy. His grave can still be seen. Sturt and his men stacked a large pile of rocks to create a cairn on top of Mount Poole. John McDouall Stuart was made second in charge to assist Sturt. When Sturt's eyesight got worse and he became nearly blind, Stuart took over the job of drawing up the maps.

Sturt divided the group into two, with one group going back to Adelaide. Following some rain, Sturt moved the other group west to a waterhole on Frome Creek, which they named Fort Grey. His path west was blocked by a dry salt lake, Lake Blanche, so he took a small group north west between Cooper Creek and the Diamantina River. Here he found a desert of stones, called gibbers, which was difficult to cross. The stones hurt the feet of the horses and bullocks. This desert has been named Sturt's Stony Desert. By September 1845 he had reached the Simpson Desert and could go no farther. He went back 713 km (443 mi) kilometres to Fort Grey.

He then tried to go north, getting close to the present site of Birdsville but again the Stony Desert stopped him. It was very hot, his thermometer burst at 53 degrees Celsius and Sturt decided to go back to Adelaide. He was so sick that he could not ride and had to be carried in a cart. They arrived back on 19 January 1846. He was unhappy as he had not found an inland sea, or reached the centre of Australia.

In February 1846 Sturt was made Colonial Treasurer, he also received a gold medal from the Royal Geographical Society. He went to England and wrote a book Narrative of an Expedition into Central Australia before going back to Adelaide. He was made a member of the South Australian parliament. He retired from work at the end of 1851 and in 1853 took his family back to England. He asked to be made Governor of Victoria, and later Governor of Queensland, but it did not happen. He died suddenly in 1869, just after being nominated for K.C.M.G., a British knighthood. 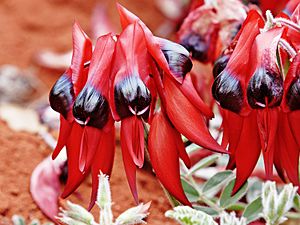 Charles Sturt is remembered in Australia with many memorials. There are rock cairns and signs that show many of the places he explored. Two plants were named after him, Sturt's Desert Pea (Swainsona formosa), the floral emblem of South Australia, and Sturt's Desert Rose (Gossypium sturtianum), the floral emblem of the Northern Territory. Sturt found the plant in creeks near the site of Broken Hill, New South Wales in 1844. He collected the seeds and brought them back for Robert Brown (1773–1858), a Scottish botanist, to study.

The Sturt Highway is the main road between Sydney and Adelaide.

The Charles Sturt University is a large university with campuses in country New South Wales. These are in Albury, Bathurst, Dubbo, Orange and Wagga Wagga.

The Sturt National Park is a large park in the north west corner of New South Wales. The park covers 340,000 ha (840,158 acres) hectares of semi desert country. There are several historic Sturt sites in the park including Fort Grey.

All content from Kiddle encyclopedia articles (including the article images and facts) can be freely used under Attribution-ShareAlike license, unless stated otherwise. Cite this article:
Charles Sturt Facts for Kids. Kiddle Encyclopedia.