Hume was born near Parramatta, a town close to (and now a part of) Sydney. His father was Andrew Hamilton Hume, who came to Australia in 1790 in charge of convicts (prisoners) and later became a farmer.

At 17 he began exploring the Sydney area, and went as far as Berrima. On these journeys Hume learned how to live safely in the bush (the area far from the cities). In March 1817 he went on a journey with James Meehan, the deputy surveyor-general, and came to Lake Bathurst and the Goulburn Plains. Later he went with John Oxley and Meehan to Jervis Bay, and in 1822 was with a group which sailed in a boat down the east coast of New South Wales looking for rivers.

On October 2, 1824 Hume and William Hovell left Sydney to try and get to Spencer's Gulf in South Australia. The explorers took six servants, five bullocks, three horses and two carts. Much of the journey was over rough mountain country with many rivers to get across. On November 16 they found a "fine river" which they called the Hume. This river was later renamed the Murray River. They made a boat to get across the river near the present site of Albury. After a journey of 11 weeks, on December 16, 1824 they reached Corio Bay, Victoria near the present site of Geelong. Hovell made an error in his navigation, and they believed that they were on the shore of Western Port Bay. The journey back was made on path more to the west, the land was more level, and they were back only 5 weeks later. They ran out of food before the end of the journey, and the whole group was very, very tired.

Hume and Hovell received grants of 1,200 acres (486 ha) of land as a reward. Hume had to sell his land to pay for the cost of the journey. This journey discovered the overland path (now called the Hume Highway) between Sydney and Melbourne.

In November 1828, Hume journeyed with Charles Sturt into western New South Wales, where they explored the Darling River. Hume was able to talk with some Indigenous Australians who agreed to help them on the journey. There was a long drought (no rain) and it was very hard to find water. It was only Hume’s good bushmanship (knowledge of the land) saved the group. 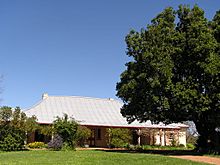 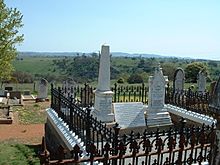 As a reward Governor Ralph Darling gave Hume 1,280 acres (518 ha) of land at Yass Plains where he lived with his wife, Elizabeth Dight, and his nephew (son of his brother). In December 1853 a speech Hovell made at Geelong led to an argument between the men. This argument was over who had been the leader of the expedition, and had Hume thought Corio Bay was Westernport Bay. There were many letters and books written about the argument. Governor Ralph Darling had always said Hume was the leader, and Hume's own letters at the time show he agreed with Hovell's navigation mistake.

Hume later worked as a magistrate until his death at Yass on 19 April 1873. He is buried in the Yass Cemetery.

All content from Kiddle encyclopedia articles (including the article images and facts) can be freely used under Attribution-ShareAlike license, unless stated otherwise. Cite this article:
Hamilton Hume Facts for Kids. Kiddle Encyclopedia.