William Hilton Hovell (April 26 1786 — November 9 1875) was an English explorer of Australia. Together with Hamilton Hume he explored much of Victoria.

William Hovell was born at Yarmouth, Norfolk, England. He joined the Royal Navy and became a captain. In October 1813, he moved to New South Wales with his wife Esther Arndell. He got work as a ship captain and made several trading trips along the coast and to New Zealand. In 1816 he was shipwrecked in Bass Strait. In 1819 he lived near Sydney and did some exploring to the south. He reached the Burragorang Valley in 1823. 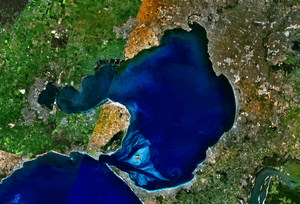 Port Phillip Bay, with Corio Bay on the left, and Western Port just visible on the right 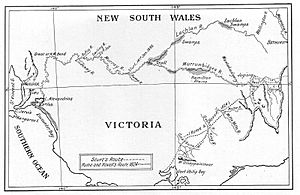 In 1824, Governor Sir Thomas Brisbane asked Hovell to go with Hamilton Hume to explore the south part of New South Wales and Victoria. He wanted to know more about any rivers that might run south. Hovell was not an explorer but he knew how to navigate (find out where he was). There were problems deciding who was going to pay for the expedition. The two explorers bought most of the equipment. The government provided saddles, clothes, blankets and guns. Hume and Hovell left Sydney on October 3 1824, with six men, five bullocks, three horses and two carts. The Murrumbidgee River was in flood so they had to make one of the carts into a kind of boat to get across. The men, horses, and bullocks swam over. A day or two later, in rough hilly country, they had great difficulty in finding a path for the carts. On October 27 they decided to leave them behind. They came to a large river on November 16, which Hovell called Hume's River "he being the first that saw it". This was the Murray River renamed by Charles Sturt a few years later. It was impossible to cross here (near the site of Albury), but after a few days they found a better place. They built the rough frame of a boat and managed to get across. By December 3, they had reached the Goulburn River. During the next ten days it was hard traveling through rough country, but they did get to more level and open land.

On December 16, they saw Port Phillip Bay. They went along its shores in south-westerly direction. They came to what is now Corio Bay near Geelong. Hovell made a mistake of one degree in working out the longitude. The explorers thought that they were on Western Port Bay. The party went back on December 18, and went more to the west. This was an easier journey. By January 8 1825, they came to the end of their food. For a few days they lived on fish and a kangaroo they were able to shoot. On January 16 they reached the carts they had left behind them, and 2 days later came to Lake George.

On March 25, Governor Brisbane wrote about the discoveries of Hovell and Hume in a letter to England. He said that he was going to send a ship to Western Port to have it explored. His successor, Governor Ralph Darling, towards the end of 1826, sent an expedition led by Captain Wright to Western Port. Hovell went with this expedition, and his mistake in longitude was soon discovered. Hovell explored the land around Western Port and to the north. Near the coast at Cape Paterson he discovered "great quantities of very fine coal". This was the first discovery of coal in Victoria. Hovell was away 5 months on this expedition. He tried during the next 10 years to obtain some special reward from the government. He had already got 1,200 acres (5 km2) for the trip with Hume, and 1,280 acres (5 km2) for the trip to Western Port. He did not think this was enough.

He spent the rest of his life at his farm at Goulburn, New South Wales. He married Sophia Wilkinson in 1848. In December 1853, Hovell was special guest at a public dinner in Geelong, Victoria. His speech was reported in some of the newspapers. Hume thought that Hovell tried to claim all the credit for their joint expedition. This led to a long and bitter public fight between the two men. A full report of the speech shows that Hume was wrong. Hume was an experienced leader in the bush. Hovell was well-educated with a friendly character. During their expedition they worked well together. They were responsible for an important piece of exploration. Hovell's discovery of coal during his visit to Western Port was also important. Hovell died in Sydney on November 9 1875, and was buried at Goulburn. In 1877 his widow left £6000 to the University of Sydney as a memorial of him, which was used to start the William Hilton Hovell lectureship on geology and physical geography. 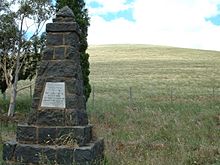 In 1922 a group was started in Melbourne to celebrate the centenary (100 years) of the expedition. Along the path of the expedition 37 memorials were built in Victoria. A dam was built on the King River near Cheshunt, Victoria in 1973. This formed Lake William Hovell. It supplies water for crops, vineyards and farms along the King River from Cheshunt to Wangaratta. A River Redgum tree Eucalyptus camaldulensis at Albury still has the mark Hovell made in 1824. He carved the words "Hovell NovR17/24" into the tree. The tree has been cloned so its genes can be kept for the future. An iron treasure chest, made in Germany in about 1660, and owned by Hovell is now in the Powerhouse Museum in Sydney. The Hume and Hovell Walking Track has been made, following the explorers path from Yass to Albury.

All content from Kiddle encyclopedia articles (including the article images and facts) can be freely used under Attribution-ShareAlike license, unless stated otherwise. Cite this article:
William Hovell Facts for Kids. Kiddle Encyclopedia.