Wangaratta is a city in the northeast of Victoria, Australia, 236 km (147 mi) from Melbourne along the Hume Highway. The city had an estimated urban population of 19,318 at June 2018. Wangaratta has recorded a population growth rate of almost 1% annually from 2016 to 2018 which is the second highest of all cities in North-Eastern Victoria.

The city is located at the junction of the Ovens and King rivers, which drain the northwestern slopes of the Victorian Alps. Wangaratta is the administrative centre and the most populous city in the Rural City of Wangaratta local government area.

The original inhabitants of the area were the Pangerang peoples (Pallanganmiddang, WayWurru, Waveroo), who spoke a Gunai language. Many of the Pangerang were killed in the Gippsland massacres.

The first European explorers to pass through the Wangaratta area were Hume and Hovell (1824) who named the Oxley Plains immediately south of Wangaratta. Major Thomas Mitchell during his 1836 expedition he made a favourable report of its potential as grazing pasture. The first squatter to arrive was Thomas Rattray in 1838 who built a hut (on the site of the Sydney Hotel) founding a settlement known as "Ovens Crossing".

The Post Office in the area opened on 1 February 1843 as Ovens. The Ovens office, and the Kilmore office which opened the same day, were the fifth and sixth to open in the Port Phillip District and the first two inland offices.

The name Wangaratta was given by colonial surveyor Thomas Wedge in 1848 after the "Wangaratta" cattle station, the name of which is believed to have been derived from an indigenous language and meaning "nesting place of cormorants" or "meeting of the waters". The first land sales occurred shortly afterward and the population at the time was around 200. The first school was established by William Bindall on Chisholm Street with 17 students.

Gold was found nearby at Beechworth in February 1852 and by the end of the year more than 8,000 prospectors rushed the fields of Ovens and Beechworth. Wangaratta became a major service centre to these goldfields. As a result, the first bridge over the Ovens was completed in early 1855.

A seven-member council incorporated the Borough of Wangaratta on 19 June 1863.

The 1870s saw the settlement establish a number of key infrastructure and services including the first water supply. Wangaratta hospital was opened in 1871 and the fire brigade was established in 1872. The railway to Melbourne was opened on 28 October 1873.

On 28 June 1880 in the nearby small town of Glenrowan located some 10 km away the final shootout that led to the capture of Australia's most famous bushranger, Ned Kelly occurred.

In 1883, the railway was connected through to Sydney.

The population at the turn of the century reached 2,500 and the centre had developed an imposing streetscape of hotels, commercial public and religious buildings. 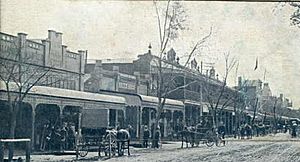 Bruck textile mills was established in 1946, employing over a thousand workers.

Wangaratta was proclaimed a city on 15 April 1959 with a population of 12,000 people. New municipal offices were opened in 1980 which became the headquarters of the Rural City of Wangaratta after the amalgamation of municipalities in 1995. 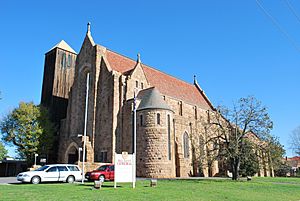 The geographical layout of the city is unusual in that the business district is located at the north-eastern extremity of the urban area, with outlying suburbs extending only to the south and west. The reason for this arrangement is that the area beyond the rivers, to the north and east of the business district, was until the 1990s prone to flooding and so unsuitable for building. Levees were constructed in the 1990s to alleviate the flooding, however development in this area has been slow.

Since the warmest month mean reaches 22 °C (72 °F), Wangaratta would have a humid subtropical climate (Cfa in the Koeppen climate classification). Despite its classification, it is located in a transitional region that also tends to receive dry searing winds from the northwest. April is the driest month; June is the wettest. Despite its location close to the Snowy Mountains and the ski fields, Wangaratta does not get severely cold or snowy in winter and daytime maximum temperatures are rather mild, although cold air drifting down from the mountains can cause frosty mornings during clear winter nights.

Rain falls as thunderstorms in the summer, and in winter with cold fronts. Occasional severe heat waves are caused by hot, dry air from the central deserts of Australia moving over the area. Temperatures of 40 °C (104 °F) and slightly above occur 2–4 times a year on average; however, heatwaves are often succeeded by cold fronts, which cause a significant drop in the temperature. The city gets 105.1 days annually, which is akin to Sydney and Wollongong. 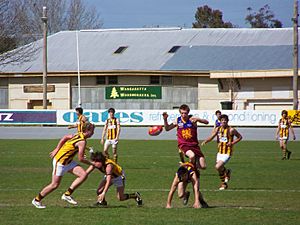 Australian rules football, cricket and Netball are the most popular sports

There are four Australian rules football clubs in Wangaratta.

The city hosted several games for the 2005 Australian Football International Cup event, with several countries competing in the sport of Australian rules football. The event was played at the City Oval and Showgrounds and set the attendance records for the tournament to date.

Cricket in Wangaratta is organised by the Wangaratta and District Cricket Association. Clubs include City Colts, Wangaratta-Magpies & Rovers United Bruck.

Wangaratta City Football Club is a soccer club based at South Wangaratta Reserve. Founded in 1951, they compete in the Albury Wodonga Football Association.

The Wangaratta Greyhound Racing Club, which held regular meetings at the same venue, has been discontinued. Avian Park is no longer used.

Between 1953 and 1956, the North Eastern Car Club ran motor racing meetings on the gravel and earth airstrip located on Wangarratta Common, south of the town centre. The circuit ran up and down the airstrip, with a loop at the western end.

The North East Windsport Club regularly sail "Land Yachts" called Blokarts (Blo-karts) at their sailing site at the nearby town of Springhurst, Victoria,

The city is home to the Northeast Bushrangers who play in the Big V basketball league. They play their home games at the Wangaratta YMCA.

The main annual event is the Wangaratta Festival of Jazz, which attracts renowned international acts and has been attended by thousands each year since 1990. Ales on the Ovens Craft Beer Festival is another main attraction for the town. 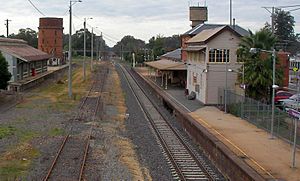 Roads are the most used transport infrastructure in Wangaratta. The Hume Freeway (M31) bypasses the city to the south and east, while the C314 now forms the main road through it (as Murphy Street and Wangaratta Road). The city is located at the junction of several other major roads, the Great Alpine Road (B500), Wangaratta-Yarrawonga Road (C374), Wangaratta-Whitfield Road (C521) and Wangaratta-Kilfeera Road (C523). A city bus service runs every half an hour during the day on weekdays and on Saturday mornings on a route covering Wangaratta's West End, the business district, Yarrunga and more recently, Yarrawonga Road.

Rail transport services both passengers and freight. Wangaratta railway station is on the North East railway line, the main railway line between Sydney and Melbourne. It is served by the Albury V/Line rail service thrice-daily as well as the NSW TrainLink XPT service twice-daily in both directions.

Historically, Wangaratta was the busy junction of several railway branch lines including; the broad gauge 5' 3"Yackandandah railway line, a narrow gauge 2' 6" Whitfield railway line and the broad gauge 5' 3" Bright and Beechworth railway line, all of which have since closed. Another short 5' 3" gauge branch line ran west to a wheat silo located on the north side of the Ovens River at Boorhaman. The current rail line through the town is the 4' 8" standard gauge rail opened in 1962.

The Murray to the Mountains Rail Trail is a shared cycling and walking track that follows the way of the former Bright railway line. The Hume Freeway runs directly next to Wangaratta.

Wangaratta also has its own specialist school for people with disabilities, Wangaratta District Specialist School

The Goulburn Ovens Institute of TAFE has two Wangaratta campuses. The Docker street campus offers a broad range of courses from business studies to music with a central area containing a cafeteria, library and student services. The Christensens Lane campus on the outskirts of Wangaratta is the home for the National Centre for Equine Education as well as providing courses in horticulture.

All content from Kiddle encyclopedia articles (including the article images and facts) can be freely used under Attribution-ShareAlike license, unless stated otherwise. Cite this article:
Wangaratta Facts for Kids. Kiddle Encyclopedia.