Division of Indi facts for kids

The Division of Indi is an Australian Electoral Division in Victoria. It is located in north-eastern Victoria. It is one of the largest divisions in Victoria. A lot of its area is in the Alpine National Park. It includes the cities of Wodonga, Wangaratta, and Benalla, and the smaller towns of Rutherglen, Mansfield, Beechworth, Bethanga, Myrtleford, Corryong, Tallangatta, Yea and Euroa. It also includes the ski resort of Falls Creek and the isolated village of Woods Point.

Indi was one of the 75 divisions set up for the first federal election in 1901. The name Indi, was an Indigenous Australian word for the Murray River, which is one of the boundaries of the division. 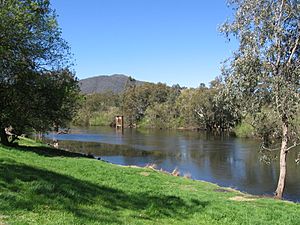 The Murray River, or Indi, at Jingellic

Famous members inlude Sir Isaac Isaacs, the Attorney-General of Australia, Chief Justice of the High Court of Australia, and the first Australian-born Governor-General of Australia. John McEwen, who moved to Murray, became Prime Minister of Australia after the death of Harold Holt in 1967. The Labor party won the seat in 1928 when the conservatives forgot to nominate a candidate.

All content from Kiddle encyclopedia articles (including the article images and facts) can be freely used under Attribution-ShareAlike license, unless stated otherwise. Cite this article:
Division of Indi Facts for Kids. Kiddle Encyclopedia.