Politics of Australia facts for kids

The politics of Australia take place within the framework of a federal parliamentary constitutional monarchy. Australia has maintained a stable liberal democratic political system under its Constitution, one of the world's oldest, since Federation in 1901. Australia is the world's sixth oldest continuous democracy and largely operates as a two-party system in which voting is compulsory. The Economist Intelligence Unit rated Australia a "full democracy" in 2019. Australia is also a federation, where power is divided between the federal government and the states and territories.

The federal government is separated into three branches:

The Australian system of government combines elements derived from the political systems of the United Kingdom (fused executive, constitutional monarchy) and the United States (federalism, written constitution, strong bicameralism), along with distinctive indigenous features, and has therefore been characterised as a "Washminster mutation". 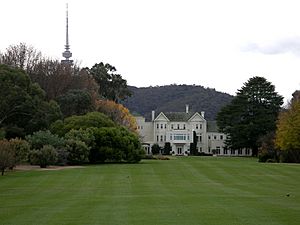 Government House, Canberra, also known as "Yarralumla", is the official residence of the Governor-General.

The Prime Minister of Australia is Malcolm Turnbull, leader of the Cabinet and head of government, holding office on commission from the Governor-General of Australia. The office of Prime Minister is, in practice, the most powerful political office in Australia. Despite being at the apex of executive government in the country, the office is not mentioned in the Constitution of Australia specifically and exists through an unwritten political convention. Barring exceptional circumstances, the prime minister is always the leader of the political party or coalition with majority support in the House of Representatives. The only case where a senator was appointed prime minister was that of John Gorton, who subsequently resigned his Senate position and was elected as a member of the House of Representatives (Senator George Pearce was acting prime minister for seven months in 1916 while Billy Hughes was overseas).

The Cabinet of Australia is the council of senior ministers responsible to Parliament. The Cabinet is appointed by the Governor-General, on the advice of the Prime Minister and serves at the former's pleasure. The strictly private Cabinet meetings occur once a week to discuss vital issues and formulate policy. Outside of the cabinet there are a number of junior ministers, responsible for a specific policy area and reporting directly to any senior Cabinet minister. The Constitution of Australia does not recognise the Cabinet as a legal entity, and its decisions have no legal force. All members of the ministry are also members of the Executive Council, a body which is – in theory, though rarely in practice – chaired by the Governor-General, and which meets solely to endorse and give legal force to decisions already made by the Cabinet. For this reason, there is always a member of the ministry holding the title Vice-President of the Executive Council.

Reflecting the influence of the Westminster system, ministers are selected from elected members of Parliament. All ministers are expected individually to defend collective government decisions. Individual ministers who cannot undertake the public defence of government actions are generally expected to resign. Such resignations are rare; and the rarity also of public disclosure of splits within cabinet reflects the seriousness with which internal party loyalty is regarded in Australian politics.

Main pages: Australian electoral system and Divisions of the Australian House of Representatives 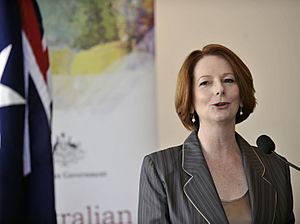 At a national level, elections are held at least once every three years. The Prime Minister can advise the Governor-General to call an election for the House of Representatives at any time, but Senate elections can only be held within certain periods prescribed in the Australian Constitution. The most recent Australian federal election took place on 2 July 2016.

The House of Representatives is elected using the Australian instant-runoff voting system, which results in the preferences which flow from minor party voters to the two major parties being significant in electoral outcomes. The Senate is elected using the single transferable voting system, which has resulted in a greater presence of minor parties in the Senate. For most of the last thirty years a balance of power has existed, whereby neither government nor opposition has had overall control of the Senate. This limitation to its power, has required governments to frequently seek the support of minor parties or independents to secure their legislative agenda. The ease with which minor parties can secure representation in the Senate compared to the House of Representatives has meant that these parties have often focused their efforts on securing representation in the upper house. This is true also at state level (only the two territories and Queensland are unicameral). Minor parties have only rarely been able to win seats in the House of Representatives. 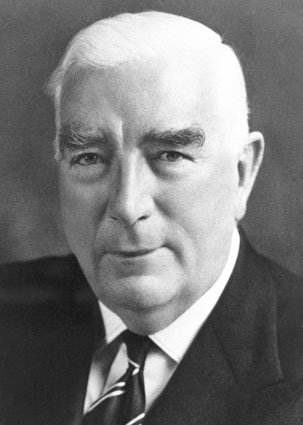 Organised, national political parties have dominated Australia's political landscape since federation. The late 19th century saw the rise of the Australian Labor Party, which represented organised workers. Opposing interests coalesced into two main parties: a centre-right party with a base in business and the middle classes that has been predominantly socially conservative, now the Liberal Party of Australia; and a rural or agrarian conservative party, now the National Party of Australia. While there are a small number of other political parties that have achieved parliamentary representation, these main three dominate organised politics everywhere in Australia and only on rare occasions have any other parties or independent members of parliament played any role at all in the formation or maintenance of governments.

Australian politics operates as a two-party system, as a result of the permanent coalition between the Liberal Party and National Party. Internal party discipline has historically been tight, unlike the situation in other countries such as the United States. Australia's political system has not always been a two-party system, but nor has it always been as internally stable as in recent decades.

The Australian Labor Party (ALP) is a self-described social democratic party which has in recent decades pursued a liberal economic program. It was founded by the Australian labour movement and broadly represents the urban working class, although it increasingly has a base of sympathetic middle class support as well.

The Liberal Party of Australia is a party of the centre-right which broadly represents business, the suburban middle classes and many rural people. Its permanent coalition partner at national level is the National Party of Australia, formerly known as the Country Party, a conservative party which represents rural interests. These two parties are collectively known as the Coalition. In Queensland, and more recently in NSW, the two parties have officially merged to form the Liberal National Party, and in the Northern Territory, the National Party is known as the Country Liberal Party.

Minor parties in Australian politics include a green party, the Australian Greens, the largest of the minor parties; a centrist party, Nick Xenophon Team; a nationalist party, Pauline Hanson's One Nation; and an anti-privatisation party, Katter's Australian Party. Other significant parties in recent years have included the Palmer United Party, the socially conservative Family First Party, and the socially liberal Australian Democrats, among others.

Since federation, there have been 29 Prime Ministers of Australia. The longest-serving Prime Minister was Sir Robert Menzies of the Liberal Party, who served for 19 years from 1939–41, and again from 1949–66. The only other Prime Minister to serve for longer than a decade was John Howard, also of the Liberal Party, who led for more than 11 years from 1996–2007. The Coalition and its direct predecessors have governed at the federal level for a large majority of Australia's history since federation: 30,548 days as compared to Labor's 12,252 days.

A two-party system has existed in the Australian House of Representatives since the two non-Labor parties merged in 1909. The 1910 election was the first to elect a majority government, with the Australian Labor Party concurrently winning the first Senate majority. Prior to 1909 a three-party system existed in the chamber. A two-party-preferred vote (2PP) has been calculated since the 1919 change from first-past-the-post to preferential voting and subsequent introduction of the Coalition. ALP = Australian Labor Party, L+NP = grouping of Liberal/National/LNP/CLP Coalition parties (and predecessors), Oth = other parties and independents.

Historical party composition of the Senate

The Senate has included representatives from a range of political parties, including several parties that have seldom or never had representation in the House of Representatives, but which have consistently secured a small but significant level of electoral support, as the table shows.

Results represent the composition of the Senate after the elections. The full Senate has been contested on eight occasions; the inaugural election and seven double dissolutions. These are underlined and highlighted in puce.

All content from Kiddle encyclopedia articles (including the article images and facts) can be freely used under Attribution-ShareAlike license, unless stated otherwise. Cite this article:
Politics of Australia Facts for Kids. Kiddle Encyclopedia.