The Australian Labor Party (ALP) is one of the two major political parties in Australia. The party was formed in 1891, and is the oldest political party in Australia. It is a social democratic party with strong links to the Trade Union movement. Labor governments have not attempted the "democratic socialisation" of any industry since the 1940s, when the Chifley Government failed to nationalise the private banks, and in fact have privatised several industries such as aviation and banking. Labor's current National Platform describes the party as "a modern social democratic party".

Since 1944, their main opponents have been the Liberal Party. The Labor Party most recently formed the Government from 2007 to 2013. This was under Kevin Rudd and Julia Gillard, who became the first female Prime Minister of Australia. Labor lost the election to the Liberal Party in September 2013. It currently holds 69 seats in the House of Representatives and 26 seats in the Senate.

In the state and territory parliaments, Labor governs in South Australia, Queensland, Northern Territory and the Australian Capital Territory. 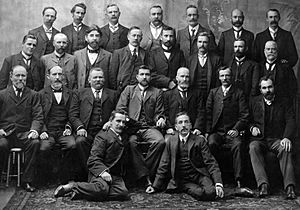 In the 1860s the trade unions in Australia began to try to get better wages and working conditions for their members. They were defeated by employers, the legal system, and the governments of the Australian colonies. Workers soon decided that they needed to become active in politics, and make changes through parliament. The first meeting of the ALP is said to have taken place in Barcaldine, Queensland in 1891. A group of shearers, who were involved in a big strike action, held a meeting in the shade of a large ghost gum (eucalyptus) tree, Corymbia aparrerinja. This tree became known as the "Tree of Knowledge".

Current leaders of States and Territories of Australia

All content from Kiddle encyclopedia articles (including the article images and facts) can be freely used under Attribution-ShareAlike license, unless stated otherwise. Cite this article:
Australian Labor Party Facts for Kids. Kiddle Encyclopedia.