He was a union leader before he entered parliament in 1980. He became leader only a little while before the 1983 election but he defeated Malcolm Fraser. His government made many changes, like the Whitlam government, but did it more slowly and with more planning. His government moved Labor to the right economically. His leadership was challenged twice by Paul Keating. He lost the second time and retired.

By July 1990, Hawke had overtaken Malcolm Fraser as the second longest-serving Australian Prime Minister but on 21 December 2004 the record was overtaken by John Howard, making Hawke the third longest serving Prime Minister.

At the age of fifteen, he boasted to friends that he would one day become the Prime Minister of Australia.

At the age of seventeen Hawke had a serious accident while riding his Panther motorcycle that left him in a critical condition for several days. This near-death experience was a catalyst to not let his abilities go to waste. He joined the Labor Party in 1947 at the age of eighteen.

Hawke was educated at West Leederville State School, Perth Modern School and the University of Western Australia, graduating in 1952 with a Bachelor of Arts and Bachelor of Laws. He was also president of the university's guild during the same year. The following year, Hawke won a Rhodes Scholarship to attend University College, Oxford, where he undertook a Bachelor of Arts in philosophy, politics and economics (PPE). He soon found he was covering much the same ground as he did in his education at the University of Western Australia, and transferred to a Bachelor of Letters. He wrote his thesis on wage-fixing in Australia and successfully presented it in January 1956.

In 1956, Hawke accepted a scholarship to undertake doctoral studies in the area of arbitration law in the law department at the Australian National University in Canberra. 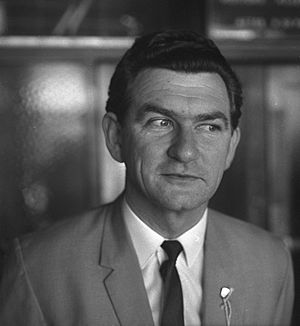 In 1956, Hawke joined the Australian Council of Trade Unions (ACTU) as a research officer. Having risen to become responsible for wage arbitration, he was elected ACTU President in 1969, where he achieved a high public profile.

After a decade serving in that role, Hawke announced his intention to enter politics, and was subsequently elected to the House of Representatives as the Labor MP for Wills in Victoria. Three years later, he led Labor to a landslide victory at the 1983 election and was sworn in as Australia's 23rd Prime Minister. He went on to lead Labor to victory three more times, in 1984, 1987 and 1990, making him the most electorally successful and longest-serving Labor Prime Minister in history. 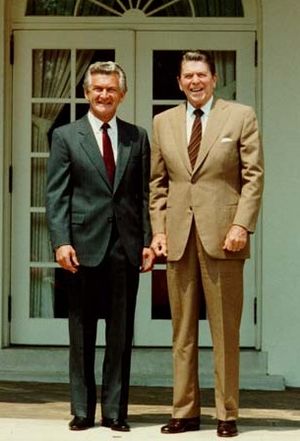 The Hawke Government created Medicare and Landcare, brokered the Prices and Incomes Accord, established APEC, floated the Australian dollar, deregulated the financial sector, introduced the Family Assistance Scheme, enacted the Sex Discrimination Act to prevent discrimination in the workplace, declared "Advance Australia Fair" as the country's national anthem, initiated superannuation pension schemes for all workers and oversaw passage of the Australia Act that removed all remaining jurisdiction by the United Kingdom from Australia. During his time as Prime Minister, Hawke recorded the highest popularity rating ever measured by an Australian opinion poll, reaching 75% approval in 1984.

In June 1991, Treasurer Paul Keating unsuccessfully challenged for the leadership, believing that Hawke had reneged on the Kirribilli Agreement. Keating mounted a second challenge six months later, this time narrowly succeeding. Hawke subsequently retired from Parliament, pursuing both a business career and a number of charitable causes, until his death in 2019, aged 89. 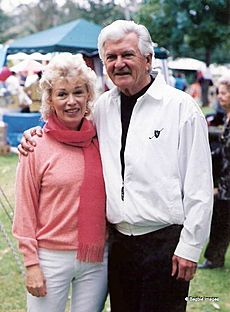 He left her for writer Blanche d'Alpuget, and the two lived together in Northbridge, a suburb of the North Shore of Sydney. Hawke married d'Alpuget in 1995.

All content from Kiddle encyclopedia articles (including the article images and facts) can be freely used under Attribution-ShareAlike license, unless stated otherwise. Cite this article:
Bob Hawke Facts for Kids. Kiddle Encyclopedia.